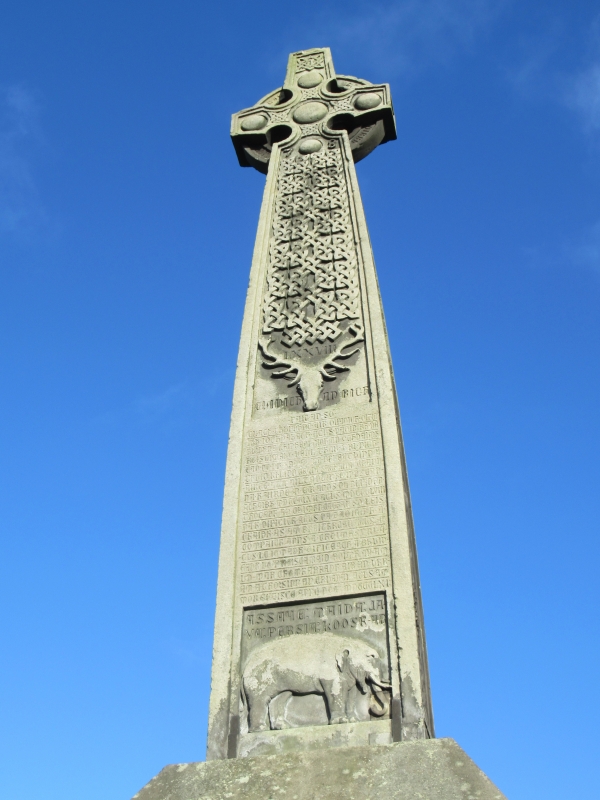 The monument is an 8m tall sandstone Celtic cross on a two stage plinth, carved with entwined interlace cable work, a stag's head and an Indian elephant. The monument is surrounded by decorative wrought-iron railings. It is a memorial to the men of the 78th Highland Regiment who died during the uprising against the British rule of India in 1857 to 58. It was designed by Robert Rowand Anderson and was unveiled on 16 April 1862.

In additions to the names of the fallen, which are inscribed on the east, west and south faces of the base, the north faces bears the inscription: SACRED TO THE MEMORY OF THE OFFICERS NON-COMMISSIONED OFFICERS / AND PRIVATE SOLDIERS OF THE LXXVIII HIGHLAND REGIMENT WHO FELL IN / THE SUPPRESSION OF THE MUTINY OF THE NATIVE ARMY OF INDIA IN THE / YEARS MDCCCLVII AND MDCCCLVIII: THIS MEMORIAL IS ERECTED AS A / TRIBUTE OF THE RESPECT BY THEIR SURVIVING BROTHER OFFICERS AND / COMRADES AND BY MANY OFFICERS WHO FORMERLY BELONGED TO THE / REGIMENT. ANNO DOMINI MDCCCLXI.

This is one of a group of statues on the Esplanade including the Statue of the Duke of York, the Scottish Horse Memorial, the 72nd Highlanders Memorial, and the Monument to Colonel Mackenzie.

The 78th Highlanders were raised as a regiment in 1793 by Colonel Francis Humberston Mackenzie at Fort George. They were sent to India in 1803 where they took part in the Battle of Assaye under Sir Arthur Wellesly (later the Duke of Wellington). After this battle the regiment gained the elephant motif on their colours. Thirty years later the regiment brought a real elephant back to Edinburgh Castle. The elephant led parades through the city and it is said that it would drink beer through the window of the soldiers' canteen and slept in the stables. The cross marks another campaign in India, after Indian soldiers of the British East India Company rose against British rule and besieged the city of Lucknow in June 1857. In September, the 78th fought to relieve the British garrison within the city.

The memorial was designed by the architect Sir Robert Rowand Anderson while working for the Royal Engineers. While working as part of the Royal Engineers Anderson was responsible also for the restoration of Broughty Castle, Dundee. Anderson was a prolific architect and was responsible for some of Edinburgh's finest buildings including McEwan Hall and the Scottish National Portrait Gallery.