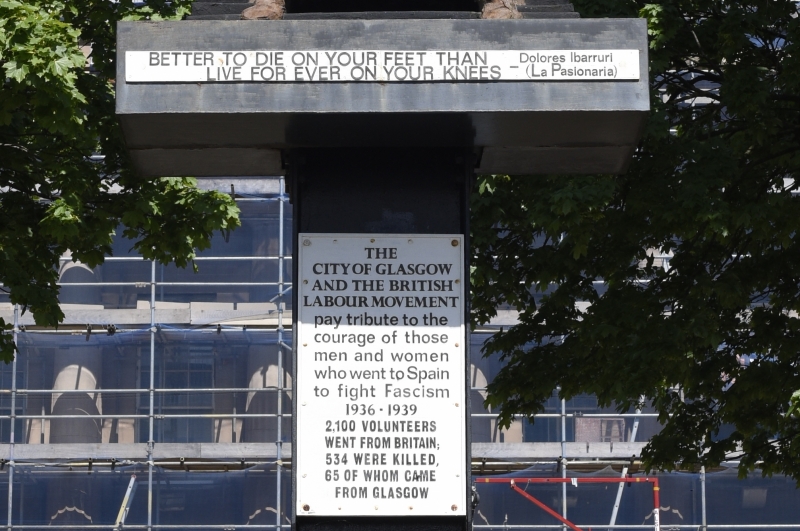 S ELEVATION: steel pedestal with plaque, "THE CITY OF GLASGOW AND THE BRITISH LABOUR MOVEMENT pay tribute to the courage of those men and women who went to Spain to fight Fascism 1936-1939 2,100 VOLUNTEERS WENT FROM BRITAIN; 534 WERE KILLED, 65 OF WHOM CAME FROM GLASGOW". Steel plinth with plaque, "BETTER TO DIE ON YOUR FEET THAN LIVE FOR EVER ON YOUR KNEES - Dolores Ibarruri (La Pasionaria)".

An important and striking late 20th century streetscape feature, this sculpture is a good example of the work of Arthur Dooley of Liverpool (1929-1994).

Glasgow's tribute to Dolores Ibarruri (1895-1989), the Spanish Civil War heroine and to the 2100 British volunteers who joined the struggle against fascism in the late 1930s. Ibarruri was born into poverty and joined the Communist Party. She wrote newspaper articles under the pseudonym, 'La Pasionaria' (The Passion Flower). Ibarruri campaigned for improvement to women's conditions, legislation to improve working, housing and health circumstances as well as seeking land reform and rights for trade unionists.

During the Spanish Civil War Ibarruri was the chief propagandist for the Republicans. Following the end of the War she fled to the Soviet Union, where she remained until the death of Franco when she returned home to Spain and became a Member of Parliament.

The phrase on the statue (BETTER TO DIE ON YOUR FEET THAN LIVE FOR EVER ON YOUR KNEES) is one of Ibarruri's most famous quotes and was uttered during a radio broadcast in Paris on 3rd September 1936.

Before studying sculpture at St Martin's School of Art, Dooley was (amongst other professions) an apprentice welder at Birkenhead Shipyards and a heavyweight boxing champion in the Irish Guards. As a communist he was a natural candidate for the commission. Dooley visited Glasgow in June 1974 to choose a site for the sculpture which had been commissioned by the International Brigade Association in Scotland. The £3000 fee was raised by Trade Unionists and Labour movement supporters. Dooley chose the location but his estimated completion time was severely delayed due to the six attempts he required in order to get a figure with which he was happy. Plans to cast the figure in bronze were shelved due to the cost.

The proposed statue caused hostility and controversy in Glasgow. Passionately supported by the Labour Party it was equally disparaged by the Conservatives. McKenzie notes several quotes including a description of the statue as, 'an artistic lump of graffiti' and another councillor reported anonymously that the statue, 'would not last ten minutes before being pushed into the Clyde'. A motion to ban the statue from Clyde Street was carried, but later overturned in 1979. A public unveiling was never carried out due to the controversy and the statue appeared, without ceremony, on 5th December 1979.

Dooley received many commissions from churches throughout his career and this may explain the strong religious feeling of the statue.