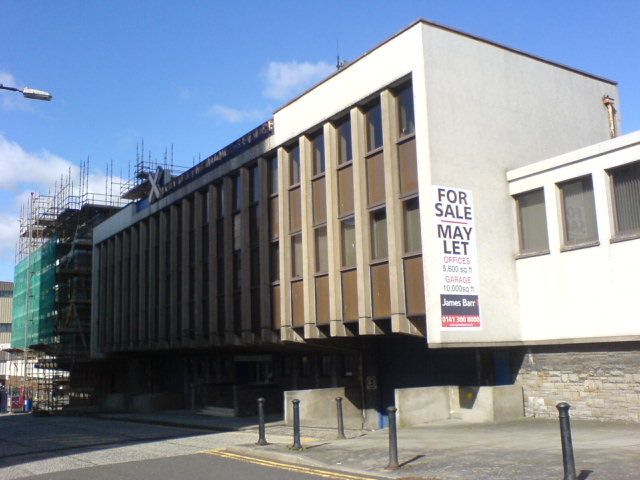 An extremely rare, striking and impressive building by the practice of Skinner, Bailey & Lubetkin. Lubetkin (1901-1990), the celebrated pioneer architect of the Modern Movement in Britain, was principally involved in the design of the dominating cross and geometric staircase. One of only two buildings ever constructed in Scotland by Skinner, Bailey & Lubetkin. The building displays an interesting use of materials, including: tesserae, concrete, stone and coloured glass.

The Scottish architect Douglas Bailey (1916-1976) was the lead architect for the St Andrew's Ambulance Association building. He trained with the Architectural Association in London and was Lubetkin's deputy on the proposed New Town of Peterlee, following which Lubetkin formed the partnership of Skinner, Bailey & Lubetkin in 1950 with Lubetkin nominally acting as 'consultant'. Information supplied from G. A. Watt in 2010 noted that Douglas Bailey took Rainer Robb in to partnership during the project and the final designs for the building were under the name of Bailey and Robb.

By the mid 1960s, Lubetkin was based at his farm in Gloucestershire, Skinner in London and Bailey in Glasgow. Bailey asked Lubetkin to work out the design of the main staircase and parts of the principal elevation, notably the large cross. Lubetkin's staircases are particularly spectacular and the St Andrew's one is no exception. Allan notes that the Lubetkin leitmotif was the controlled collision of straight and curved geometry and this would appear to be exemplified here in the triangular plan geometric staircase which ends in a gentle curve at the ground floor. It is possible that Lubetkin may have influenced the vertical timber panelling in the boardroom. While that in the main hall is smooth and varnished, the boardroom has been sandblasted to present a weathered appearance. At Highpoint Two Lubetkin designed the interior and furniture for the penthouse flat with walls of vertical roughened sand-blasted pine panelling. Lubetkin was awarded the RIBA Gold Medal for Architecture in 1982.

Lubetkin founded the radical architectural practice Tecton in the 1930s and it was responsible for some of the decade's most outstanding buildings, including the Penguin Pool at London Zoo and Highpoint flats in London. Tecton was disbanded in 1948.

Motorway development plans for Glasgow necessitated the St Andrew's Ambulance Association (founded 1882) to vacate their previous headquarters in North Street (architect, C E Monro of J M Monro, 1928-9). The figure of St Andrew on the Maitland Street façade was resited from the North Street building when it was demolished.

The Cowcaddens site is significant as it was specifically planned to contain emergency services within one compact area. This continues today (2004) with the police station and fire station located in adjacent blocks.

The contractor Logincon Ltd went into liquidation in 1970 and Drummond Lithgow were appointed to continue the work. The building was opened by HM the Queen Mother on the 26th June 1970 and the plaque then unveiled is located in the main hall.

Recreational competitions amongst the emergency service staff and others were a frequent occurrence in the building. The hoist in the main hall was used to assist with setting up emergency situations.