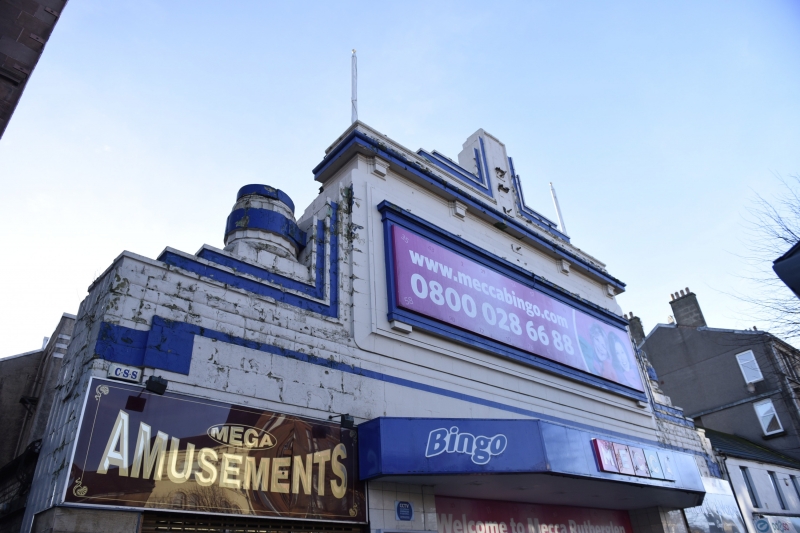 DESCRIPTION: 4 2-leaf doors in recessed entrance below curved canopy to centre of principal elevation; small shops to each side; moulded rectangular Art Deco pediment above entrance with bracketed cornice and stepped central finial. Truncated fluted columns flanking to each side. Roughly rectangular auditorium behind with tapered rear end.

A well-detailed Art Deco cinema situated in a prominent position on the main road through Rutherglen. The arrangement of the entrance façade is very unusual with a clever use of abstracted classical detailing to create a modern effect. The original entrance doors and shop fronts have been replaced. The interior still retains a number of original features including the foyer staircase and most of the decorative features in the auditorium (currently used as a Bingo hall - 2005).

The cinema was originally built as an addition to the 'Vogue' chain, seating 1,750, but was bought by Odeon shortly after it opened. It is possible that alterations may have been made to the interior décor at this time. The Vogue was commissioned by George Singleton who owned a chain of cinemas of the same name in and around Glasgow. Designed by James McKissack in 1935 and was opened in January 1936, it operated as a cinema until 1974.

The practice, John McKissack and Son, was named after James's father, who died in 1915. From about that time James McKissack focused almost entirely on cinema design and built over 25 cinemas before his death in 1940, many of which were for George Singleton.

References and Notes updated as part of Cinemas Thematic Study 2007-08.