A Category B Listed Building in Stirling, Stirling 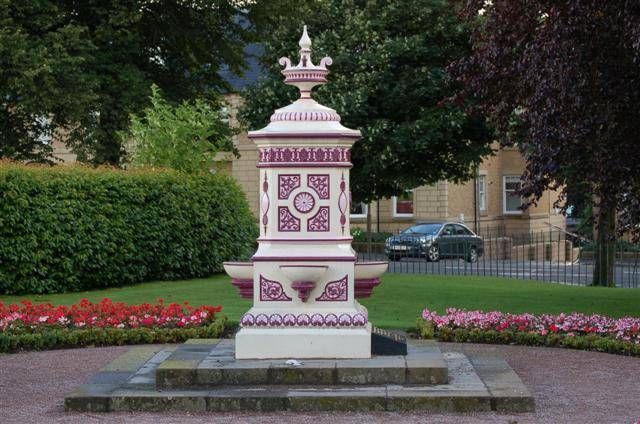 This grey iron drinking fountain, dating from the earlier to mid 20th century, sits on the E corner of the Kings Park in Stirling. The fountain acts as the centrepiece for an area of formal garden at the E of the Kings Park, which gives the adjacent Victorian suburb of Stirling its name. The fountain is the only known example of this unique design, produced by the Lion Foundry in Kirkintilloch, according to a 19th century design by George Smith & Co.'s celebrated Sun Foundry.

The Kings Park Drinking Fountain is the only known example of this model of fountain designed by the famous Sun Foundry, one of the most prolific and innovative foundries of 19th century Scotland. A variation on this model (with a lion replacing the urn on the top, but otherwise identical) is found in a Sun Foundry catalogue of the later 19th century. The designs for the Sun Foundry castings may have been acquired by the Lion Foundry of Kirkintilloch, and it is from this foundry that Stirling Council bought the Kings Park Fountain in 1939. The fountain is thought to have been restored in the 1970s when it was painted its present colour.