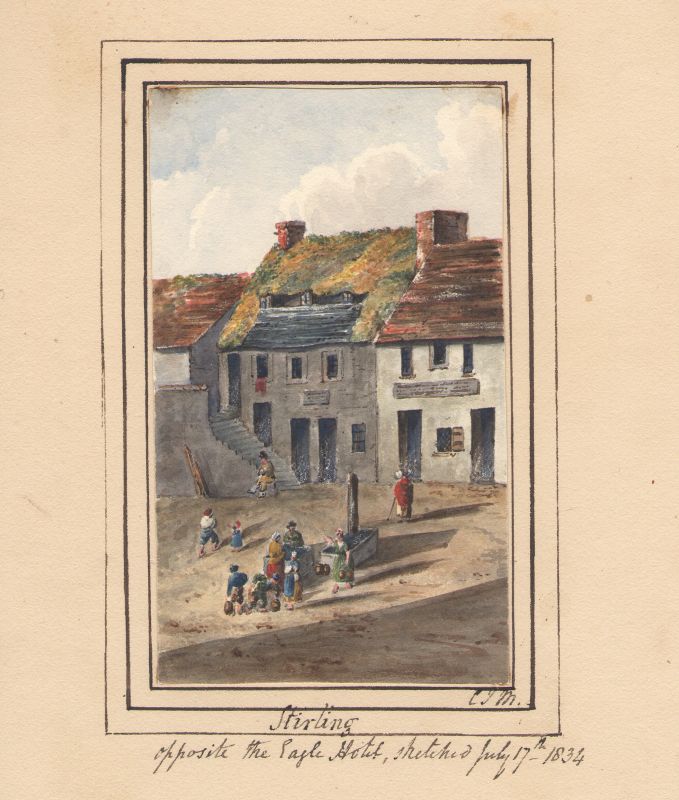 Of very good local interest being an early 20th century landmark building occupying a key corner site at the junction of Main Street and Bridge Street. Built as a hotel, the Eagle's building materials and 'Queen Anne/Old English' style set it aside from anything else built in Callander.

Built on a corner site, rectangular in plan with a basement and 3 storeys, its principal NW and NE elevations are adorned whereas its other 2 elevations are plain.

The main (NW) elevation is turned N to face up the Main Street towards the former railway station. A projecting outshot to the ground floor has been filled to create display space for the shop. There are various segmentally headed window openings to the 1st floor with an advanced canted window to the far left supporting a larger projecting gabled bay at the 2nd floor.

The NE elevation faces across the Main Street with a later shop front to the centre. The doorway to the left leads to a hallway and stair giving access to the 1st and 2nd floors. The right arris is chamfered at the ground floor with the doorway of the shop set on the angle. The stop chamfer above the doorway is moulded. The windows at the 1st and 2nd floor are asymmetrically arranged. A mullioned and transomed segmentally headed window is arranged to the 1st floor with a small segmentally headed window to the far left. A bipartite window is centred below a slightly advanced gable at the 2nd floor.

The side SE elevation is predominantly blank with the exception of a few randomly disposed window openings.

Admission not obtained at time of resurvey (2004).

The Eagle is no longer run as a hotel, the basement and majority of the ground floor is currently run as a golf shop, (2004) with the rest of the building being privately owned. It is the only red brick 'Queen Anne style' building in Callander with some similarities to work by John Allen in Stirling (see separate listings). Callander by the early 20th century was full of guest houses and hotels with 'The Eagle' very much standing out from it competitors by its look alone. The building has been designed so that its main features are concentrated on the elevations which face along the Main Street towards the former railway station. The former Ancaster Arms built in a restrained Baronial style (see separate listing) is situated to the opposite side of the Main Street. It is interesting to note the difference in design of these 2 buildings despite there comparatively similar dates. The SE elevation which faces E down the Main Street is largely blank, it is possible when built it was expected that a building would most likely fill the adjacent gap site, this however has not been the case.