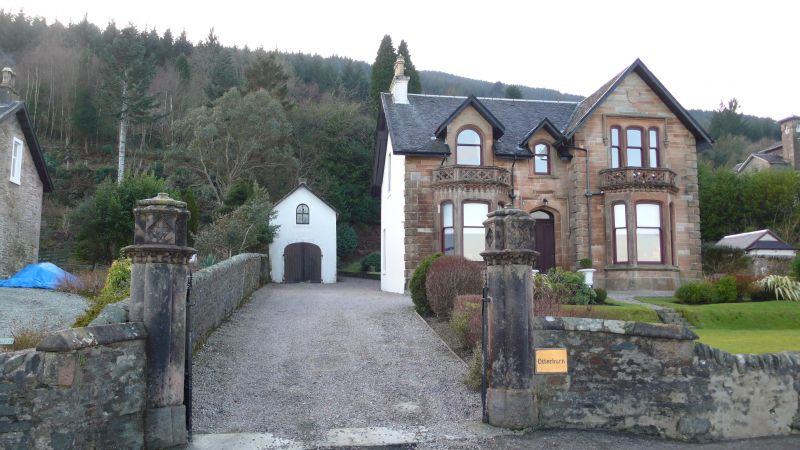 Otterburn, built c1856, is one of a number of fine marine villas along the Shore Road in Blairmore. Although the overall form of the house is not unusual and conforms to a well-known pattern book layout, the front of the house is in fine ashlar stonework, with good carved Gothic detailing, particularly on the pierced galleries on the bay, similar to that found on both Bannachra and Blair Athol (both also listed).

Otterburn is a 2-storey 3-bay asymmetrical villa. The front (E) elevation consists of an advanced gabled right bay with a ground floor canted bay, a hood-moulded tripartite window above and an armorial panel in the apex. The central entrance has a single half-dormer above and to the left is a canted bay with a single half-dormer above. The Tudor-arched doorway has a stepped hood-mould and a roll-moulded reveal. Round, basket and Tudor arches are used for the windows. Above the ground-floor bays are stone galleries, with intersecting-arched corbels and pierced quatrefoil decoration. To the rear of the house is a single-storey piended-roof extension. The house, including the single-storey portion to the rear, has survived as it appears on the 1st edition OS map.

Interior: access to the interior was not obtained at the time of the resurvey (2004).

Boundary Walls And Outbuildings: to the S of the house is a 2-storey coach house with depressed coach arch on the ground-floor and a round-headed window to the accommodation above. To the rear of this is a short range of single-storey outbuildings. The house is surrounded by a rubble boundary wall. The main entrance is by a cast iron gate through gatepiers modelled on bunched colonettes with quatrefoil decoration on the capstones.

The settlement of the W shore of Loch Long was a continuation from the development of Kilmun and Strone, which began in the late 1820s when marine engineer David Napier feued a three mile stretch of land from Campbell of Monzie and ran daily steamer connections to Glasgow. Blairmore pier opened in 1855, encouraging development northwards (Walker, 2000, 147).

The National Monuments Record for Scotland contains photographs of a large armorial panel in the grounds of Otterburn (1990). The panel was not seen during the resurvey (2004).