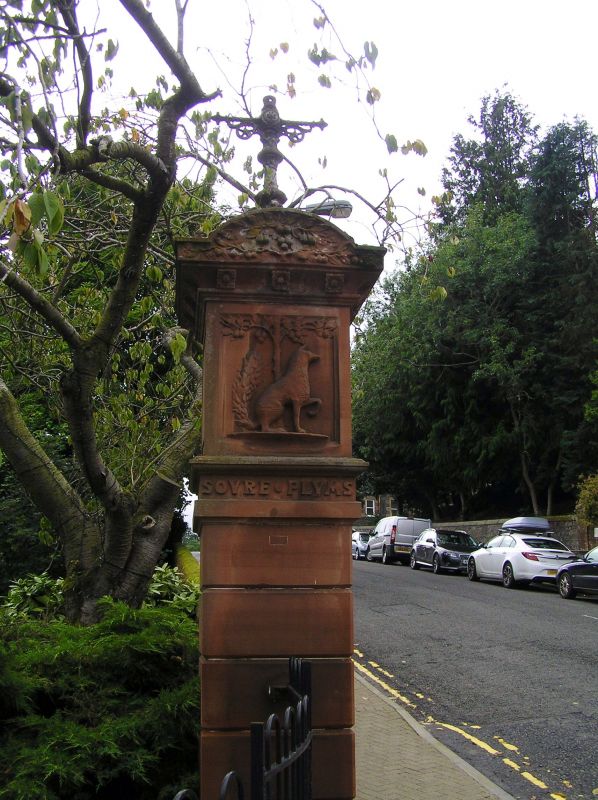 Squared banded rusticated columns with ornate floral corniced capitals and carved panels with inscriptions depicting the image of a fox under a plum tree.

Round Tree Bridge with its commemorative pillars make a significant contribution to the streetscape of the centre of Galashiels, linking the earlier town centre with the large area of workers housing to the S which developed in the later 19th C. The bridge was built to open up and improve communication between the town centre and the areas of housing developing to the S. The pillars themselves are of good quality carving, erected to demonstrate the civic pride in the redevelopment of the gardens of the houses of Bank Street to form the public gardens in 1907. There are remnants of the tall iron lamp stand to SE pillar.

Carving to SE Pillar reads: ROUND TREE BRIDGE, These pillars were erected in 1907 by public subscription to commemorate Bank Street Improvement and to record the public spirit of the proprietors in gifting the ground. M. Rutherford. Provost. Carving to NW Pillar: ROUND TREE BRIDGE, These pillars were restored in 2000 to commemorate the 400th anniversary of Galashiels becoming a "Burgh of Barony" in 1599.