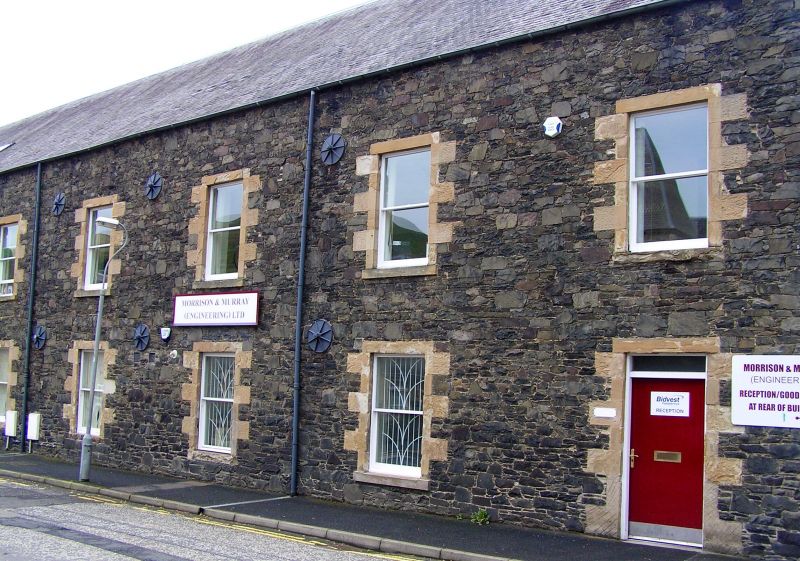 B-Group with Botany Mill and The Glasite Meeting House.

As part of the complex at Botany Mill, the present engineering works is an important part of the industrial heritage of Galashiels. The complex comprises large-scale storage buildings of the mid to late 19th century, which are increasingly rare in the town. These buildings, linked by a later building, are important townscape features and form part of a significant group including Botany mill proper and the former Glasite chapel (both separately listed).

It was originally built for Sanderson and Murray, established in 1844, who relocated to Buckholmside in 1856.

It is likely that there were single-storey sheds between the present two older buildings. These have since been replaced with the present late 20th century structure. On the town plan of 1858 the Roxburgh Street building and a building extending to the rear are marked as Wool and Skin stores.

The importance of the wool manufacturing trade to Galashiels can not be overestimated, as this industry was the sole reason for its expansion and prosperity in the 19th century. Wool manufacture has largely subsided, but the remaining buildings are important monuments to the industry.

Although there were water-powered fulling mills in Galashiels by the 16th century, the modern Textile Industry began in the 18th century. At this time, however, Galashiels had a relatively minor part in the Borders textile industry, although the establishment of the manufacturers corporation in 1777 was to play an important role. Through the 19th century the industry expanded rapidly. The arrival of the railway in 1849 allowed for easy access to raw materials and coal, which facilitated the increased use of steam power by the 1860s. The late 1860s and early 1870s were the peak of prosperity for Galashiels, which benefited greatly from a number of foreign conflicts. By this time there were over 20 large-scale producers of cloth, as well as a number of allied industries. However, Galashiels had an over-reliance on foreign trade, which led to the slow decline of the industry through the late 19th and early 20th century.