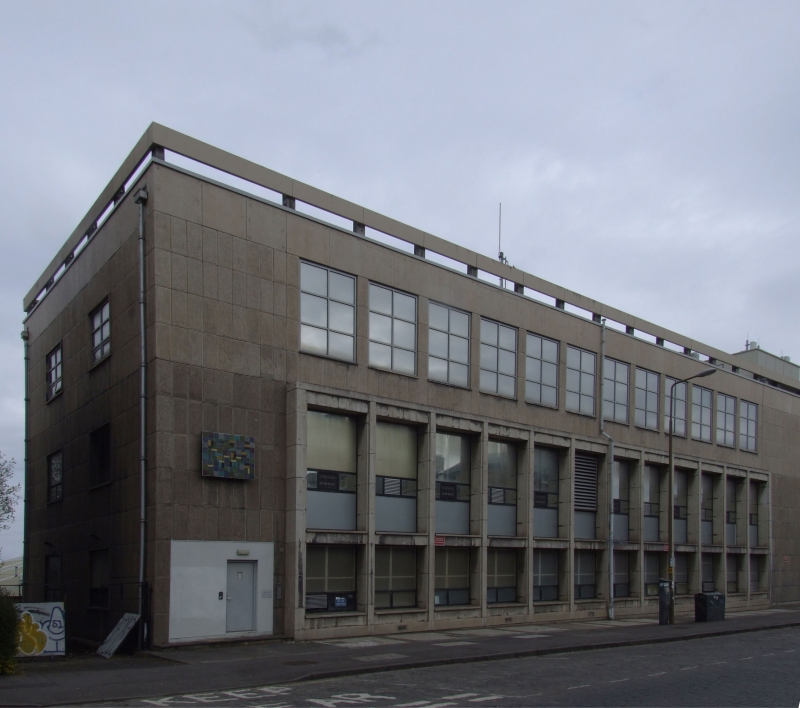 INTERIOR: remains in use as telephone exchange (2007). Plain utilitarian detailing with banks of transformers and cabling to each floor.

The Waverley Telephone exchange is a fine, geometrically designed Modernist building, with strong compartmentalised facades, and a significant example of 1960's public architecture in Edinburgh. The building demonstrates the forthright ideals of planning and post-war modern architecture at the time. It makes a strong contribution to the immediate streetscape with it's striking geometry whilst blending well into the overall street scene, with the neighbouring tenement block and Catholic Apostolic Church at the end of the street.

The tiled panel over the former main entrance was made by Malkin-Johnson Tiles, some tiles dating from the earlier Malkin Tile Co. and which can be attributed to the designer Ken Clark MBE. Ken Clark was one of London's most versatile craft potters at the time and was known for collaborating with architects on bespoke designed panels.

Photographs from 1964 show the building as first constructed as 2 floors. The later addition of the third floor with parapet railing is thought to date to the early 1970's. The addition of the third floor transforms the earlier less exceptional design and converts it into a more successful Modernist statement. The third floor must be almost contemporary and may well have been intended from the start. There is no obvious difference in the internal detailing of the stairwell which appears contemporary to the original building as erected in 1964.

R Saddler is believed to be the senior in-house architect for the Post Office at the time.