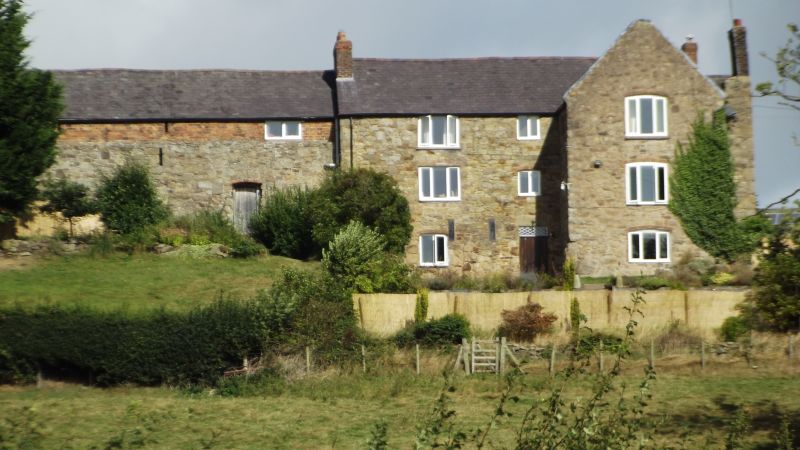 Location: Situated c1.7km SW of Mynydd Isa and reached from a by-road running N from the A5118 at Llong.

Plas Major originated probably C16 or C17. At least 2 phases of building are discernible with a change in floor level and slight differences in the stonework suggesting that the western range was a slightly later addition. Alterations probably of C19 and late C20 dates include remodelling of many window openings and replacement of window joinery, rebuilding the tops of the chimneys in brick, and adding an entrance extension on the N side. The replacement of the roof with slate was probably also carried out in the C19 or C20.

Roughly coursed stone rubble with roughly dressed quoins, stone chimneys with brick stacks, slate roof, 2 storeys with basement, 3-storey to the S where the ground drops sharply. The gable ends of the house all rise above the present level of the roof. The E elevation to the road has a projecting gabled bay with a large lateral stone stack attached to the left with a blocked mullioned window to the left and to the right a small former stair window with a stone surround. The range set back to the right has a blocked stone 2-light mullioned window at basement level. On the right hand side of the central projecting wing is a range with a blocked stone 2-light mullioned window on the upper floor and blocked openings below. The N elevation is gabled with a central replaced window. Set back and attached to the right is a wing which has a late C20 porch and is attached to a range of farm buildings which have been partially rebuilt in red brick. The S elevation has a projecting gabled bay with one window on each of the 3 floors and on the left-hand return elevation there is a blocked stone 2-light mullioned window on the upper floor and a similar window to the first floor which has lost the mullion. The attached range to the left has C19 and C20 openings and the barn range attached to the left is of stone with brick rebuilding at eaves level.

There is a change of level between the E and W ranges. On the E side is a C20 kitchen with a pantry leading off which was probably the position of a stair, though all trace of this, apart from what appears to be a stair window, has disappeared. Other rooms have heavy chamfered and stopped ceiling beams and the basement has a large fireplace with a cambered bressummer. On the W side of the basement is a range of brick-built bread ovens probably of late C18 or early C19 date. On the upper floor certain dividing walls are said to be timber-framed.

Roof space and interior of barn not inspected at time of 1997 survey.

Listed as a large C16/C17 house retaining some exterior historic character with interior features of interest.