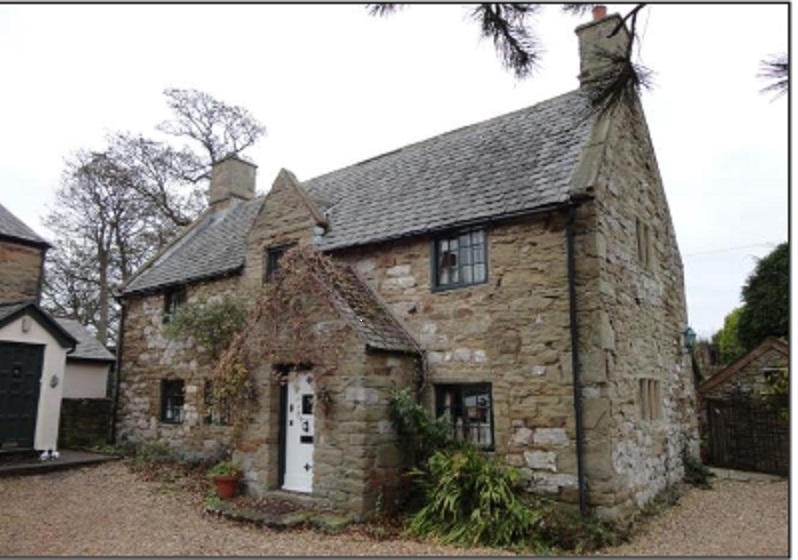 Location: Approximately 350m NE of Llanasa church and set back on the E side of a minor road between Llanasa and Gwespyr.

Built in 1674 (date on building) as a house with hall, pantry, cross passage and parlour. A rear wing was added soon after. The house was converted into 2 cottages in the third quarter of the C19, and is shown as such on the 1871 Ordnance Survey, then was restored as a single dwelling in 1973.

A 2-storey cottage of rubble stone with bigger quoins, a slate roof behind coped gables, and stone end stacks. The front has mainly C19 horizontal-sliding sash windows. The doorway to the original cross passage is R of centre in an added gabled porch with boarded door and strap hinges. To its R is a single window to the parlour. To its L is a small-pane window in an earlier opening, a sash in a former doorway, then another sash to the L end, both of which light the original hall. The upper storey has 3 sash windows, of which the central window is beneath a gablet. In the R gable end are mullioned windows, 3-light in the lower storey to the parlour, and 2-light in the upper storey. The rear has a cross passage doorway with Tudor-headed lintel and dated shield. A 2-light mullioned window is upper L. To the R of the doorway is a rear wing with lower ridge line and an end stack. The side wall facing the doorway has a sash window in the lower storey beneath a wooden lintel, and an upper-storey casement beneath the eaves. On the R side of the wing is an inserted window in the upper storey. The L gable end of the house has a blocked opening lower L, with ventilation strip to its R. Upper R is a small window in a dressed stone surround, and a similar small window above it lighting a former attic stair.

Not inspected, but RCAHM Wales recorded timber-framed partitions, with square-headed doors, to the pantry from hall and passage, and ogee-headed doorways to the axial passage between hall and cross passage to the side of the pantry. The hall has a wide fireplace in the gable end.