A Grade I Listed Building in Halkyn, Flintshire 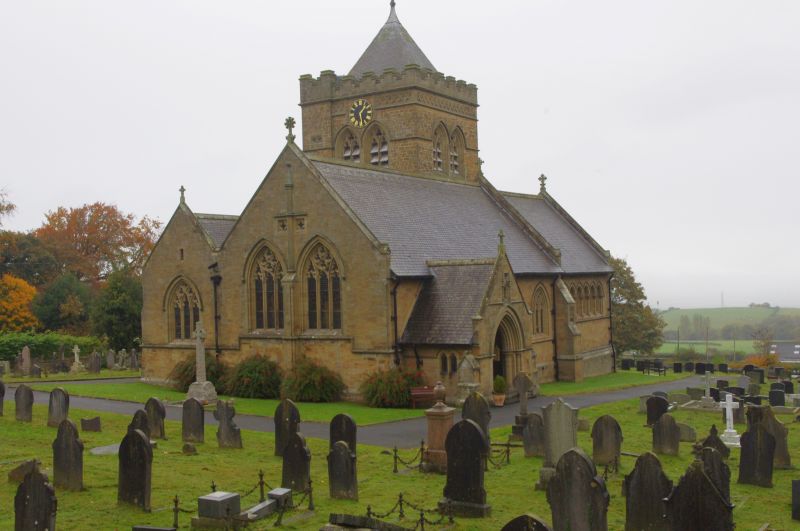 Location: In a walled churchyard at the N end of Halkyn and opposite the Old School.

Built 1877-8 by John Douglas, architect of Chester, at the expense of the Duke of Westminster. An earlier church on a different site was concurrently demolished, but the font and some memorial tablets were reclaimed and set up in the new church.

Early Decorated style church comprising nave with a N aisle and S porch, a slightly lower and narrower chancel, and NE tower. Of dressed snecked stone, and a slate roof with overhanging eaves and behind coped gables. The copings have gablets to the eaves and crosses to each apex. The walls have plinth and sill bands, and hood moulds linked by an impost band. The windows have geometrical tracery.

On the S side the shallow gabled porch is set back from the W end, and has angle buttresses with gablets to the side walls only. The arched doorway has a single order of nook shafts, and half round responds with fillets, and moulded 2-centred arch. Above the doorway is a small cusped light flanked by attached pinnacles. Inside, the porch is tunnel-vaulted and has stone seats R and L. The S doorway to the nave has double boarded doors enriched by vertical ribs with studs, and strap hinges. The side walls of the porch have pairs of cusped lights, and an impost band carried over the windows as hood moulds.

The nave has three 3-light windows, the centre with slightly different tracery. A stepped buttress at the E end of the nave has a panel with the crucifixion on an angel corbel in relief, probably reclaimed from a C14 churchyard cross. The chancel S wall has 6 lancets arranged in an arcade with round shafts and moulded capitals. The high-set E window is 5-light and has a hood mould with head stops.

The broad, square NE tower is set back from the E end of the chancel, and dominates the view of the church from the E. It is 3 stages with a diagonal NE buttress and projecting square turret to the NW, lit by narrow slits and quatrefoils. The lower stage has, in the W wall, a small doorway with roll-moulded surround and reached up stone steps, with ribbed and studded door similar to the porch. In the N face is a single hooded cusped light offset to the R and 2 similar windows in the E wall. In the middle stage are 2 similar cusped lights in the N face, while in the E face are 4 quatrefoils set in a circle inside a roll-moulded square surround. The upper stage is slightly narrower. The belfry has two deeply moulded 2-light windows with louvres in each face. Above the windows the E and W faces have round clock faces flanked by attached shafts that stand on the apex of the belfry windows. Above the belfry windows is a frieze of lozenges with blind quatrefoils. The embattled parapet has stepped merlons and behind the parapet is a steep pyramidal slate roof with apex weathervane.

The N aisle has four 2-light windows, and a 3-light W window with hood mould. The W wall of the nave has paired 3-light windows flanking a central buttress enriched with nook shafts, that carries above impost level an attached diagonal pinnacle. The pinnacle is flanked by small quatrefoil lights in square moulded surrounds.

The nave has a 4-bay N arcade of 2-centred arches and round marble piers with moulded freestone capitals. The arched-brace roof of the nave has 2 tiers of windbraces and the principals stand on moulded corbels. The aisle has an arched-brace roof on moulded brackets and stone corbels. The nave and aisle windows also have hood moulds linked by string courses. The chancel arch has an outer single order of marble nook shafts with 2 shaft rings, an inner moulded 2-centred arches on responds with short clustered marble wall shafts, and hood mould with angel stops. The chancel has a boarded polygonal ceiling with thin moulded ribs, enriched with painted quatrefoils and a moulded and pierced cornice. The E window has a shafted rere arch. The S chancel window has an arcaded rere arch with marble shafts and continuous hood mould. On the N side of the chancel is a 2-centred arch to the vestry in the tower base, with 2 orders of chamfer dying into the imposts. On its E side is a credence shelf with cusped arch and foliage to the spandrels. The chancel has an encaustic tile floor. The panelled chancel reredos with ornate cresting has a central painting of the Last Supper flanked by panels with Creed, Decalogue and Lord's Prayer against gold backgrounds.

Furnishings are all the work of Douglas. The round marble font has 'suffer little children ...' engraved beneath the rim, and stands on a triangular base with attached filleted shafts, and has a tall wooden openwork Gothic cover. A second, baluster-shaped freestone font is at the W end of the N aisle and was brought from the old church. Around the bowl it is inscribed 'W Taylor, H Hughes, Churchwardens 1776'. The polygonal wooden pulpit has relief panels of stylised foliage below open close traceried panels. It stands on a marble base continuous with a freestone chancel screen base with relief moulded foliage panels to the front and marble coping. The communion rail has open iron scrollwork and wooden hand rail. The pews have moulded ends. The choir stalls, with attached priests' stalls, are richer, having panelled fronts with relief decoration.

All windows have stained glass by Heaton, Butler & Bayne. In the E window is the crucifixion, with 12 apostles in the S chancel window. The nave and aisle have monochromatic glass, mainly with New Testament scenes. The nave S wall has the first miracle, Christ as the Light of the World, and the resurrection of Lazarus. In the W wall is the angel appearing to the shepherds, and 3 wise men, while in the N aisle are Jesus teaching and windows illustrating various blessings.

Of wall monuments in the N aisle some were brought from the old church. At the W end is a black slate tablet to Ann Williams (d.1703) beneath a marble cartouche; a white marble tablet to David Price (d.1746) and various descendants; black marble tablet with egg and-dart border and swan-necked pediment with urn framing a white inscription tablet commemorating George Hughes (d.1899), an agent of the Duke of Westminster's Halkyn Estate; marble tablet by Thomas Pearce of London commemorating Henry Cooper (d.1877), and a plain tablet to Rev Edward Roberts (d.1839) by J Browne of London, dated 1840.

The tower has a newel stair.

Listed grade I as an especially fine Decorated style church by a prominent C19 regional architect, notable for its original composition and precise articulation of decorative vocabulary, and an exceptionally complete interior scheme.