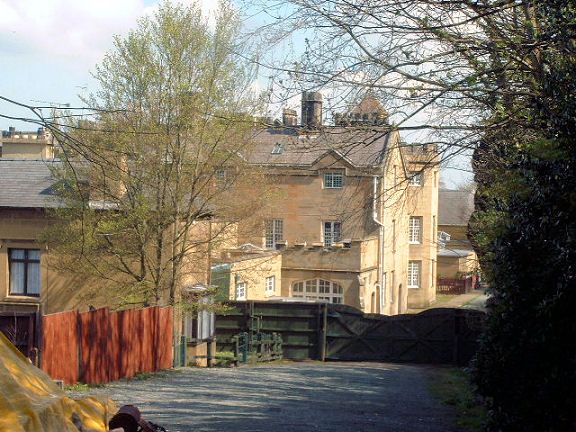 Location: In its own grounds E of Gronant village, on an elevated site overlooking the Dee Estuary to the N.

Talacre was the seat of the Roman Catholic branch of the Mostyn family and is located only a few miles W of Mostyn Hall. A house existed at Talacre by 1634 but has not survived and an C18 banqueting house is the only surviving building associated with its park. The present house was built 1824-9 by Thomas Jones, architect of Chester, for Sir Edward Mostyn. It incorporated a large private chapel. The 1839 Tithe map shows the plan of the house almost as it remains, with only minor additions to the end of the service wing. In 1921 the house was sold to a closed order of Benedictine nuns. A church, attached to the front of the house, was built in 1931-2, to which a campanile was added in 1952. The building reverted to a private house in 1990.

A castellated Tudor-Gothic country house of 2 storeys and 9 bays, of ashlar and slate roofs with stone stacks. The symmetrical entrance front faces E. It has wider projecting outer gabled bays (marred on the L side by the later church) with polygonal angle turrets, and a continuous upper-storey sill band. A central 3-bay castellated and buttressed porte-cochere has Tudor-arched openings and pinnacles, and similar arches to the sides. Inside, the porte-cochere is rib-vaulted. The windows to the main elevation are mainly cross windows with hood moulds retaining small-pane glazing and pivoting lights above the transoms. The central bay has a canted oriel window. The R-hand outer bay has a 3-light mullioned and transomed window in the lower storey.

The 5-bay R-hand garden front, which overlooks the garden and the Dee Estuary to the N, has mullioned French windows in the lower storey, opening to an arcaded terrace, and cross windows above with oriel to the centre. In the arcade below are narrow vents to the basement. The 7-bay rear elevation has projecting outer bays similar to the entrance front, and on the R (S) side obscured by the service wing. The L-hand (N) bay has a 7-sided conservatory that overlooks the garden. This has buttresses with pinnacles and battlements, and French doors (partly boarded up) with Gothic tracery to the overlights. Below it the basement has a central doorway with flanking doors, all boarded up.

The rear elevation has a basement facing a walled service court. In the 5 central bays the windows retain some small-pane glazing, while others are plate glass replacements. An advanced central gabled bay has a large 3-light mullioned and transomed window with small-pane iron-frame glazing lighting the principal stair, and cross windows to the lower storey and attic. The basement has a panel door and overlight. The remaining windows are cross windows. Immediately R of the L-hand outer bay is a doorway with mullioned overlight and panel door. The return of the R-hand outer bay has a replaced basement window.

The L (S) side of the entrance front houses an original 5-bay chapel in the projecting L-hand bay. In its S side wall it has three 2-light Tudor-headed windows and a half-lit panelled door to the L under a hood mould (a similar doorway in the R-hand bay is obscured by the later church). In the upper storey are three 2-light windows under square hood moulds.

The long service wing further L is mainly 2-storey with paired sash windows and plain parapet. Immediately behind the chapel is a single bay set back, and with basement windows incorporating pivoting lights. Further L it is set forward with a 2-window return wall with boarded door and vertical ribs, under an overlight, lower R. Then the main elevation has a higher 3-storey polygonal bay flanked by narrow single bays. At the W end, set further forward, is a 3-storey gabled bay, with a sash window lower L and boarded and ribbed door lower R, with a narrow bay set back on its R side.

A single-storey castellated projection is set back at the W end of the service wing. Its W wall has Tudor arches flanking a single-storey 2-window flat-roof projection added in the mid C20. The R-hand of the arches has glazing and a French door, the L hand has inserted double boarded doors and brick infill. Above the castellated projection is a balcony entered from the W end of the service wing, which in the middle storey has small-pane French doors and paired sashes and 3 upper-storey windows beneath gablets.

The N elevation of the service wing has a basement and faces the service courtyard at the rear of the main house. It has mainly paired sash windows. From the L end, behind the main house, are two 2-storey bays incorporating a panelled basement door with overlight lower L, then a higher polygonal 3-storey bay, to the R of which are 2 further bays, incorporating a panelled basement door lower R. Above it is an added projection at lower-storey level, carried on a stone pier. Further R is a wide gabled bay with a panelled door an overlight to the basement.

The church, built against the L-hand bay (the original family chapel) of the entrance front is of scribed render with slate roof. In the N wall is a central bellcote with 4 simple pointed chancel windows to its L and four 3-light nave windows to the R, above a 7-window roughcast lean-to aisle with 2 buttresses. A NE campanile, built in 1952 (date on tablet in S wall) is brick, of 5 stages with 2-light belfry openings and pyramidal roof. The E window is 4-light Perpendicular below a niche with Virgin and Child. The S wall has 4 buttressed bays with simple pointed chancel windows, L of which are 2 projecting half-hipped bays with 2-light windows, the L of which has a projecting gabled porch with double boarded doors. Further single-storey projections are to the L (SW).

The principal rooms are on the R side of the entrance hall, with the main and service stairs behind, and the private chapel to the L. The service rooms are mainly behind the chapel.

The entrance hall has panelled wainscot, and a fireplace with stone Tudor-headed surround. The ceiling, behind a Gothic cornice, is panelled with heavy moulded ribs and incorporates diamond panels bearing heraldic shields. The doorways have panelled reveals and stepped hoods with shields over the doors. The rooms immediately R and L of the entrance have similar detail, the room to the R having a Jacobean-style wood-panelled ceiling.

The drawing room and dining room are arranged ensuite with the conservatory on the N elevation, and open to a terrace giving spectacular views over the Dee Estuary. They have moulded timber doorcases richer than the remainder of the house. Both rooms have marble chimneypieces, which have Tudor arches, relief foliage to the spandrels, and keystones with rampant lion (NE) and shamrock (NW). They are flanked by panelled buttresses with gablets to the caps (missing on R side of the NE room, and missing completely from the NW room). The plaster ceilings have diamond panels incorporating mouchette decoration in relief, while the rich cornices incorporate friezes of basketwork, foliage, and an openwork trail. The rooms are linked by large double-panelled doors (awaiting re-hanging at the time of inspection), while a glazed screen incorporating a door leads into the conservatory.

The wide bay at the S end of the entrance front houses the original family chapel. This has a wide 5-bay tierceron vault on wall shafts rising from moulded corbels, of which the end bays are narrower. At the W end is a gallery with a panelled front of cusped arches. Below it are Tudor-headed doorways R and L, and a central corbelled stoup in a cusped recess. The S wall has a single stained glass window.

The main stair is behind the entrance hall. It is open-well with square newels incorporating blind cusped arches, and has a balustrade of open lozenges with cusped ornamentation. The stair leads to a first-floor landing with balustrade in a similar style. The stair well has a cornice with foliage enrichment, and similar enrichment to the heavy ribs of 3 panels. On the L side of the main stair is a narrow, open-well service stair with plain balusters. On the R side of the entrance hall is an L-shaped corridor leading along the back of the principal rooms to the door on the rear elevation, and has a plaster rib vault. The corridor is also built around a smaller room, possibly a study, with a Tudor stone chimneypiece.

The windows retain panelled shutters. The doors are panelled and have panelled reveals.

The church has a 7-bay segmental plaster ceiling with heavy ribs.

Listed grade II* as a exceptionally fine example of a castellated country house, retaining original character and notable interior detail, and as the centrepiece of a well-preserved group of garden and estate buildings.