A Grade I Listed Building in Chirk, Wrexham 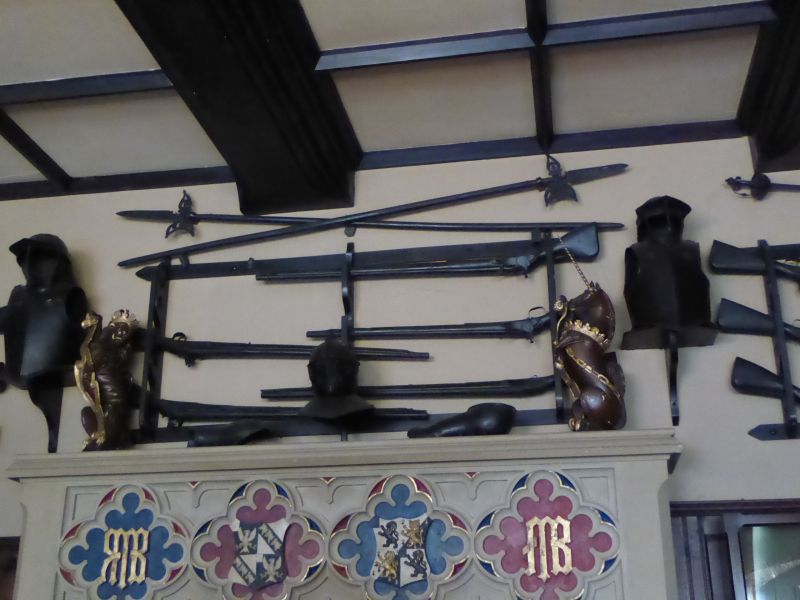 Location: The castle stands on a bluff overlooking and controlling the Ceiliog Valley. It is reached by Station Avenue running directly W from Chirk township.

The original castle was probably begun soon after 1295, for Roger Mortimer, for the newly created marcher lordship of Chirkland, on lands formerly being that of the Princedom of Llewelyn ap Gryffydd ap Madog. The royal mason, Master James of St George from Savoy, was probably the originator of the plan form, as it resembles Beaumaris and Harlech in certain respects. He perhaps continued to act as advising master mason as in other royal castles in Wales. The first major stage of building probably extended until Mortimer's fall in 1322. It then passed through the hands of the Earls of Arundel, the Beauforts, and to Sir William Stanley c1475. It was then administered by the Tudors, with some large scale repairs taking place before 1529, until 1563 when it was granted by the queen to the Robert Dudley Earl of Leicester. In 1595 it was purchased by the merchant adventurer Thomas Myddleton, in whose lineage it has continued until the present day. The external shell of the building is early C13 in date; the E and S sides and the principal hall range within on the N side were rebuilt in the early C14. Within, on the N side, it is largely Tudor in date. After some damage during the civil war, followed by limited demolition, probably of the upper part of the towers in 1659, work was undertaken by Sir Thomas Myddleton, 2nd baronet in the E range in 1673-8 under the guidance of Lady Wilbrahim of Weston, Staffs, in the style of William Wynde. Richard Myddleton, the C18 owner, employed Joseph Turner, surveyor of Hawarden, to remodel the state rooms in 1766-78, supervised by John Cooper of Beaumaris, and further work was undertaken in the mid 1840s by A W N Pugin, who had been engaged by Col Robert, and who provided a facade for the E range and undertook internal alterations in collaboration with J G Crace. A W Pugin died in 1852, and the ongoing work was continued by his son, Edward W Pugin. The chapel was restored by Sir A Blomfield in 1894, and further work was carried out by Lord Howard de Walden in 1912-13. The castle was bought for the nation in 1978 and placed in the care of The National Trust. A detailed history is included in the house guide.

The castle is in the form of a hollow square, with bold round towers at each corner, and central to each side rising from a battered plinth. The barbican is on the N side, between the NE tower and the centre tower, approached by a ramped bridge, a pointed arch of 2 chamfered orders. C19 ashlar parapet with ridged copings. The barbican itself has a tall outer arch, and within, an inner arch of 2 orders behind the portcullis drop. The mantled and supported Myddleton Arms, by A W Pugin, are set in a recess over. Two levels of small side arrowslits. Studded framed doors. Within the entrance, C19 doors with pointed arches each side and a timber joisted ceiling. The inner doors are set in another arch of 2 chamfered orders, on one the inscribed date 1669 TM. The doors are framed and set inside the arch.

The main towers are of 3 storeys, with stone mullioned and transomed windows and crenellated parapets added in the C19 after the upper stages of the towers had been demolished in 1659, and the C18 balustrade removed. In the plain stone curtain between the towers, a series of irregularly placed similar stone windows, some with horizontal hood moulds. The W elevation is similar, with similar windows, the crenels of the parapet partly blocked. A dog-leg external stair rises to a doorway, and further S, the base of a garderobe chute. Beyond the centre tower, the castle was demolished, the curtain stopping at an irregular break, now built up in the C14 in rubble as part of the rebuild of the S side, and continued further in the C19 to join the stables.

The S elevation is largely obscured for much of its length by the C18 and C19 stables and workshop additions, but beyond the W privy garden wall, the C14 character is apparent in the two 2-light transomed and cusped windows to the chapel and a further trefoil light to the left. Other windows of the C19. Two gabled buttresses.

The E elevation has a fine 5-light window to the chapel S of the central tower, created by Sir Arthur Blomfield in 1894 to replace one by E W Pugin, the wall deeply battered below. The curtain between the centre and the NE tower has similar stone mullioned and transomed windows with label heads, also repeated on the towers. Crenellated parapet.

Courtyard elevations: The W side is still largely medieval, of c1300, although the upper part of the N end is rebuilt. Low 2-centred door to the Guard Room, and adjacent, a trefoil-headed door. Above, bracketed out on corbels, a bellcote of 1609, refurbished by E W Pugin, and now with a clockface of 1960 over a 2-light window. Bell stage has 2 x 1 shoulded open arches and a hipped lead roof. To the left, the medieval Adam tower, crenellated with spiked coping to the merlins. Other windows mostly 3-light mullioned and transomed.

The S side is of 1529, 3-storey, with mullioned and transomed windows and doors with depressed arches. The imprint of 9 gables from the C17 roofs is visible, replaced in the C18 when the wall was taken up to a level parapet. Two light attic windows. The door to the Chapel, at the E end has a segmental pediment containing a large weathered winged putto.

The E side is of 1664-1678, a 2-storey range with 7 mullioned and transomed 3-light windows and parapet over, against which is built a single storey range by E W Pugin in c1846, buttressed between windows and a central porch with a crenellated parapet. Arms over the door.

The N side is of c1630-40 with later alterations. Irregularly placed mullioned and transomed windows. A 2-centred chamfered arch to the kitchen has an inscription over
THIS:NEW:BUILDING:/AND:THE:TOURE:WAS:BU/ILT:ALL:IN:ONE:YEARE:BY:TH/ OM MYDDLETON KNIGHT 1636. To the right, steps to a door by Pugin dated 1846.

Of the early medieval accommodation, no work survives outside of the towers and wall passages. The S range, which was rebuilt c1400 after the reduction of the size of the building, contains the great chamber on the first floor, and the chapel at the E end rising from ground to first floors. The kitchen and Cromwell Hall on the N side was the dining room in the C17, classicised in c1778 and re-medievalised by A W N Pugin in 1845-6 in association with the decorator J G Crace. This has a stone fireplace by Myers with painted arms in cusped recesses over, and a ceiling on moulded beams. An oak panelled screen at the lower end leads to the cross passage and buttery beyond, and from it access is gained to the grand staircase in the centre N tower. This open-well stair with its fine arcaded iron balustrade was designed by Joseph Turner in 1777-8 and has marbled Ionic columns at each corner supporting a beamed and moulded ceiling. This was restored to the C18 design in the 1950s. On the upper floor of this range, the state dining room, formerly the chamber over the buttery, is also in the classical taste by Turner, with coved ceiling, and panelled walls decorated with early classical moulded husk motifs, restored in 1963. Fine C18 chimneypiece of marble. The adjoining saloon, the great dining room in the C17, has a magnificently enriched 15-panelled ceiling incorporating cameo paintings by G Mullins, an Irish landscape painter. Marble Corinthian chimneypiece incorporating jasper by Bromfield of Liverpool, 1773. This room leads enfilade to the corner drawing room, completed in 1796 and redecorated by Pugin and Crace, and provides direct access to the long gallery in the E wing, 30m long, begun in 1670 for Sir Thomas Myddleton, 2nd bart, and completed in 1678, and probably by the same team employed by Lady Myddleton (Wilbrahim) at Weston Park, Staffs. Bolection moulded panelling and acanthus cornice and broken pediments over doors in the Restoration manner, and a panelled heraldic ceiling. Tiles by Minton and Hardman commissioned 1847-8. The Chapel, in the SE corner, originally fitted out in the 1670s. The chapel was restored and reroofed by Sir A Blomfield in 1894, and with further work carried out by Lord Howard de Walden in 1912 when it was converted to a music room. The E range contains much work by A W Pugin, since altered, and ceilings by Thomas Harrison. Ribbed ceiling to the library.

Included at Grade I as a building of major national importance, being one of the series of Edwardian castles of Wales, adapted to become the seat of an important marcher landed estate, in which context, successive leading architects and designers were involved in the creation of a major country house within the medieval framework, of which fine work of the late C18 and mid C19 especially stands out.