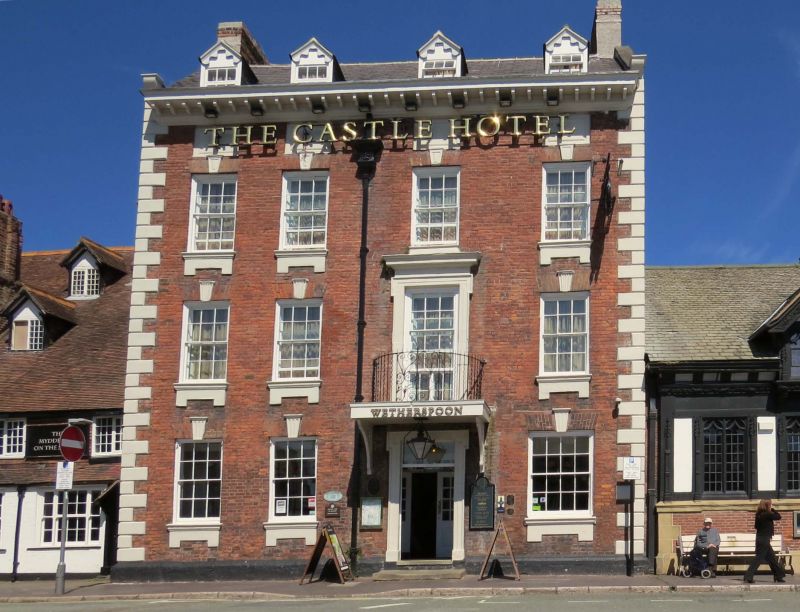 Location: Facing W into the Square, opposite the junction with Clwyd Street. In a prominent location.

Early-mid C18 purpose-built hotel, owned by the Myddeltons of Chirk Castle, and also used for Civic purposes, such as meetings of the Aldermen and Councillors. It was originally known as The White Lion, the main emblem on the Myddelton Coat of Arms, its name changing to the Castle Hotel in 1885. Beer was brewed on a commercial scale, in the ranges to the rear.

Early-Georgian style. Exceptionally tall 4-storey 4-window hotel with double-depth plan, and rear wing. Constructed of red brick under a slate roof, with brick end stacks. Brick and painted stone dressings, including raised quoins, modillion eaves cornice, plinth, moulded kneelers and raised copings. The windows are flush hornless sashes, mainly 12-pane, with flat-arched heads of gauged brickwork with prominent keystones, and moulded sills with aprons. Entrance to R of centre with eared architrave containing a panelled door, imitating double doors, under a plain overlight. Large flat porch canopy, supported on curved brackets with pierced quatrefoil decoration, which also forms a balconette to 1st floor window. The balconette has wrought iron railings in semi-circular plan, with wave bars and scrollwork. Behind the railings is a full-height window, a 12-pane sash over a 2-light small-pane casement, within a substantial eared architrave with cornice over. The remaining windows to ground, 1st and 2nd floors are 12-pane, except that to R of entrance which is 16-pane. To the 4th storey are short blind windows in the form of raised panels, immediately under the eaves. This storey is lit by 4 small gabled attic dormers, with waved barge boards and small-pane top-hung windows. Attached to the front, to the R of the balconette, is a sign bracket with iron scrollwork.

The gable ends are roughcast. The S end has a small plain-glazed casement to each gable, lighting the attic; a further building adjoins beneath. The N end also has small attic windows, that to L converted to a fire-escape. To 2nd floor, offset to far R, a tall 8-pane window with keystone and apron. Similar aprons to blocked windows, aligned to 1st and ground floors. The rear is of brick with sash windows asymmetrically arranged; top floor has 3 sashes at different levels; to 1st floor, connected with staircase, is a lean-to oriel supported on a pillar, with sash to front and 4-pane sash to L-return. To its L is a 12-pane sash. Ground floor has a margin-glazed stair-light beneath oriel, and a small lean-to to L. Large 3- and 2-storey rear wing offset to R, built in several phases, and with alterations. It is of brick, partly rendered, under slate roofs with brick stacks. Various wooden windows including sashes, small-pane casements, plain-glazed casements and top-hung lights. Three-storey block with roof hipped against main range, with truncated brick ridge stack and external brick end stack; 4-over-8-pane sash to R of end stack. N side has asymmetrical C20 windows and a fire-escape; S side has 2-light casements and a lean-to to ground floor. Adjoining to E is a lower 2-storey range, roughcast under a slate roof with clustered end stack. N side has 2 tall small-pane windows to ground floor and a 6-pane sash to centre of upper storey. To the L it is adjoined by the rear wing of Castledene.

Inside the front lobby are half-glazed double panelled doors with small-pane glazing; similar side-lights and overlight. Entrance leads into stair-hall with narrow open-well staircase to R: turned balusters with swept handrail, coiled to base, and decorated tread ends. The ceiling of the stair-hall has exceptionally fine C16 plasterwork, said to have been brought from the Seven Eyes next door, with foliage, acorns, concentric circles and bosses; moulded coving with cornucopia. To L of stair-hall, wide doorway leading into bar with margin-glazed double doors, overlight, and panelled reveals. The ceiling has a substantial plastered cross-beam and narrow moulded coving; panelling beneath the windows. Small classical-style fireplace to N wall, possibly added later. The staircase continues to at least the 2nd floor; doorway to principal bedroom on 1st floor (with balconette) has doorway with fluted pilasters and panelled reveals; panelled doors throughout.

Listed grade II* for the exceptionally fine architectural character of this purpose-built early-Georgian hotel, little-altered and retaining particularly good original detail. In a very prominent position in the centre of Ruthin and imparting considerable townscape value.