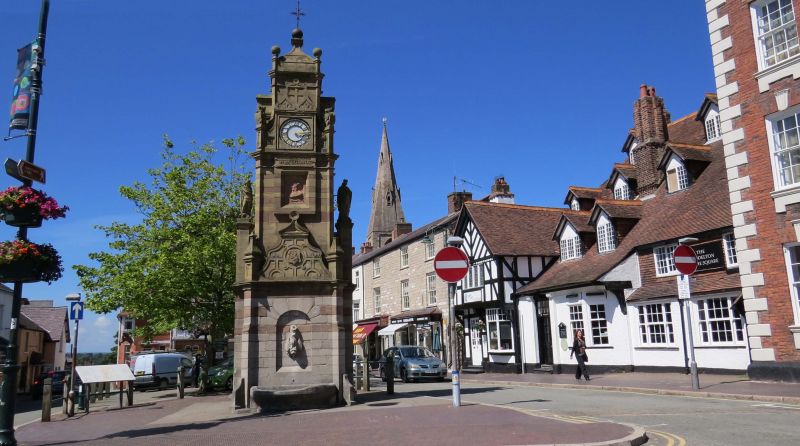 By John Douglas, Architect of Chester, 1883. It was built as a testimonial to Joseph Peers JP before his death, and is on the site of the former town hall, which was demolished in 1863.

The monument consists of a clock tower, horse trough and drinking fountain, using Jacobean detail. Three-stage tower, each stage narrower than the one below, and with diagonal buttresses. It is constructed of banded masonry, typical of Douglas, the lower stage of grey and red masonry, the upper stages of yellow and red sandstone ashlar. Jacobean detail, including volutes and strapwork motifs. The front, to the lower stage, has a recessed round arch with pointed-ended stone voussoirs, fixed to which is a water spout in the form of a winged beast. Beneath, at ground level, is a large stone water trough. The rear has a narrow boarded door under a shouldered head, reached by 2 curved steps; attached to the NW angle at mid-level is a small stone basin. The E and W sides each have a central angle buttress flanked by small rectangular lights with hollow mouldings, beneath which are low stone seats. Moulded string course to 2nd stage, the diagonal buttresses terminating in pinnacles which have recessed panels and bulbous finials. To each face, shallow Dutch gables with volutes and strapwork motifs, those to front and rear bearing shields, depicting a lion and castle, respectively. Above the gables to front and rear, raised rectangular panels, that to front bearing a red sandstone bust of a man, that to rear bearing an inscription reading 'Erected AD 1883 / to commemorate / Joseph Peers / Clerk of the Peace for the County of Denbigh'. High central angle buttresses to E and W sides support stone statues of a robed figure and a knight, respectively; small lancets flanking, with quarry glazing. Moulded string course to 3rd stage, each face narrower; those to front and rear bear a clock in a square panel, with a shield and strapwork motifs above. The E and W faces each have a gable with triangular pediment, under which are pairs of small round-headed lancets with roundels above. Pinnacles to angles of monument, surmounted by beasts holding shields. The front and rear faces rise to a domed ogee roof with dentilled eaves cornice, the apex with a ball finial surmounted by a weather-vane, and ball finials to angles.

Listed as an unusual C19 monument by an important regional architect, retaining its character and detail. A striking focal point, and with group value with listed buildings and monuments in St Peter's Square.