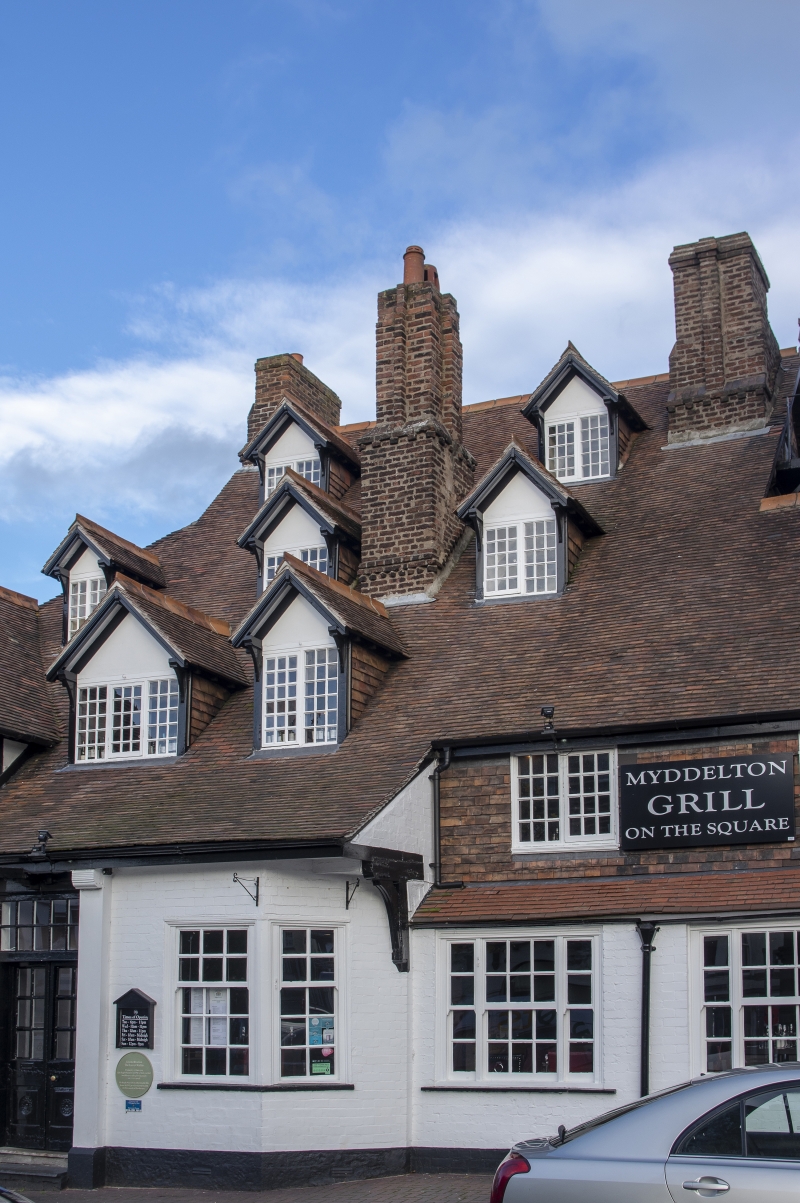 Location: Facing W into St Peter's Square and adjoining the L side of the Castle Hotel.

A medieval storeyed spere-truss or aisle-truss hall-house, with remains of cross-wing or porch-wing to front. Of box-framed construction with decorative open-roof. Three-unit in its current form, though it might have been longer originally; there is an open spere-truss 2nd from S end, on both floors, and possibly others, but alterations make this hard to confirm. In 1595 the house was bought by Sir Hugh Myddelton, who provided London with its first water supply. The house was remodelled c1657, apparently by Sir Richard Clough, when it was widened and heightened, the front possibly built out onto the alignment of the former cross- or porch-wing. It has an unusually long and steeply pitched roof with 7 asymmetrically-placed dormers, characteristic of Clough's work, such as Bachegraig. Internally, this remodelling included a fine staircase, an armorial plaster panel dated 1657, and timbering typical of the C17, including reconstruction of the back wall and remodelling of the N unit. Further alterations occurred in the late C18, including rebuilding the exterior in brick, and inserting a small pent-house to the R front. The building has been a Public House, associated with the Castle Hotel, since the C18; it was also known as The Castle Arms and The Myddelton Arms.

Asymmetrical front, single-storey with attics, constructed of painted brickwork under an exceptionally long tiled roof, half-hipped to L end and with lower ridge height to R bay; wide boarded eaves. Three brick stacks with clustered shafts and dentilled bands, end stacks to upper ridge, that to R set forward, and 3rd stack towards centre of front roof pitch. The roof pitch has 3 tiers of gabled attic dormers. Cut in to the R is the C18 pent-house. To the L is the entrance bay: half-glazed double panelled doors, bearing rosettes, with small-pane overlight, between pilasters with corbels supporting the overhanging eaves. The entrance bay is canted to R, with tall horned sash windows, 6-over-9-pane to front and 4-over-6-pane to canted angle; the wide boarded eaves are supported by a bracket to R. Further R is the 2-storey 2-window pent-house, the ground floor in a shallow lean-to with tiled roof, the upper storey tile-hung. Replaced panelled door to far R with gabled porch canopy on brackets, with square door head visible behind. Two horned tripartite sash windows to ground floor, 2-light small-pane casements to upper storey immediately under the eaves. The gabled attic dormers have tile-hung sides, white-painted gables, and contain very small-pane casement windows. The dormers are asymmetrically arranged in 3 tiers, with 3 to middle tier and 2 to the top and bottom tiers. They are 2-light, except for that to lower L which is wider with a 3-light casement, and that to L of middle tier which is narrower. The half-hipped section of roof partly projects over No 12A.

Rear is 3-window, 2-storey-with-attics, constructed of brick, the openings with segmental brick heads. To far R, a wooden door under a gabled porch canopy; aligned above, an opening blocked with brick and a very small light to 1st floor, and a small late C20 attic light. Two-window section to L with wooden cross-windows with small-pane glazing; ground floor has small lean-to to L; 1st floor has fire-escape door reached by metal stairs to L; attic storey has 2 gabled half-dormers. Very narrow lower bay to L end, tile-hung to upper storey, with a half-glazed boarded door, above which is a 2-light small-pane casement.

The ground floor has the remains of possibly 2 spere-trusses towards the S end. The internal S truss has a substantial cambered tie-beam on a jowled free-standing post (surviving to front only), and with curved brace between post and tie-beam. It has a 2nd brace attached to the post and facing towards the front, probably for the former wing. To the S end, part of a truss survives to the SW angle, possibly a 2nd spere-truss. A short section of the cambered tie-beam is all that survives of the internal N truss, adjacent to the bottom of the staircase. The N bay appears to have been remodelled in the C17, the N end wall close-studded with wattle and daub infill, and an arched doorway to L, now infilled, which formerly led into No 12A; the rear wall is also close-studded. The ceiling has 2 stop-chamfered spine-beams. Centrally-located staircase aligned parallel with the building: good C17 timber dog-leg stairs with heavy turned balusters, square newels with caps and moulded handrail. One flight leads to the 1st floor, opposite the top of which and at an angle is a fine plaster panel bearing an armorial shield, dated 1657 above and with a Latin inscription below. Flanking panels with strapwork motifs and rosettes. The 1st floor has possibly 2 internal spere-trusses, exactly the same as those below. The internal S truss is open; the internal N truss was altered in the C17, but the free-standing post towards the front suggests that it was a spere-truss: It contains a C17 partition with 2 doorways, that to R is to the staircase, that to L leads to a higher-level room at the N end, which has plastered walls; the latter doorway has a segmental head cut into the soffit of the tie-beam, and the free-standing post on its L has a socket for a curved brace. The S end wall has a small fireplace with timber lintel, probably C18. To the S and centre, cusped wind-braces are visible beneath the purlins, the roof ceiled above. The 2nd flight of stairs leads to the 1st level of the attic, beyond which is a spiral staircase in the same style. The top of the attic is 2-bay with central tie-beam truss with collar, containing a partition with central doorway and vertical posts.

Listed grade II* for its exceptional interest as a medieval hall-house retaining at least one spere-truss, remodelled in the mid-C17 in the highly distinctive style of Sir Richard Clough: the building retains good detail of both periods, the front making a particularly strong contribution to the historic townscape. Group value with the Castle Hotel.