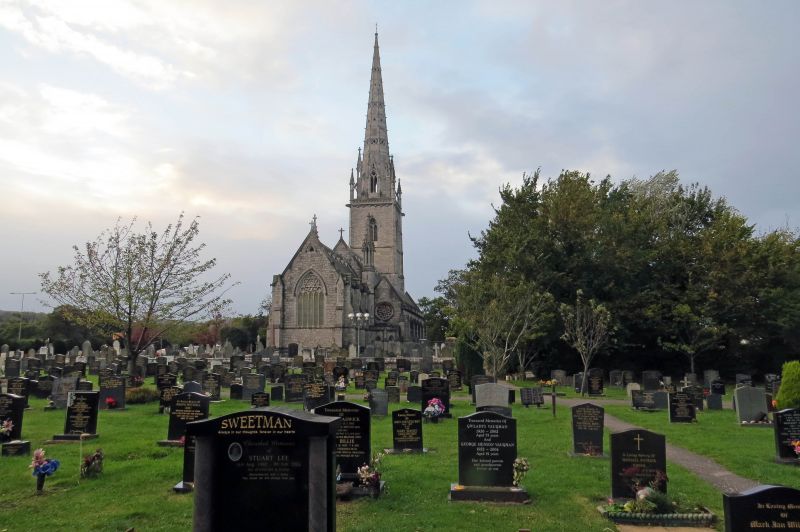 Location: At N side of the former St Asaph road now bypassed by the adjacent A55. Low perimeter wall separately listed.

The Marble Church at Bodelwyddan stands as a memorial erected to Henry Peyto, 16th baron Willoughby de Broke by his widow, Lady Margaret, although he is interred at Compton Verney. The baron died in 1852, and Lady Margaret returned from Warwickshire to her ancestral home at Bodelwyddan. At her wish Bodelwyddan was formed into a parish separate from the parish of St Asaph, the church was erected to the design of John Gibson and dedicated, at the bishop''''s suggestion, to St Margaret. The foundation stone was laid on the 24th of July 1856 and the church consecrated on the 23rd of August 1860. The church generally lacks inscriptions, but on the N and S arcades respectively the names Margaret W de B and Hen. Peyto W de B are displayed. Their heads are carved at the entrance and again as chancel arch moulding terminals; a bust and a portrait of Lady Margaret are displayed in the porch. The parallel honours due to Church and State are signalled by the heads of the bishop and of Queen Victoria carved as external moulding terminals of the east window.

John Gibson, of Westminster, (1817-92) was a prolific architect probably known to Lady Margaret''''s family even before his work restoring country houses in Warwickshire. He was a former pupil of John Hansom (who had worked at Bodelwyddan Castle) and of Sir Charles Barry, and a colleague of A W Pugin. For Lady Margaret, Gibson designed St Margaret''''s in the Decorated Style with Geometric tracery, to a commission in which he appears to have had an unlimited budget for materials and workmanship, the whole costing £60,000.

There are many headstones of the Great War in the churchyard, in consequence of the proximity of the military hospital and camp at Kinmel Park.

A large church consisting of a nave with N and S aisles, a chancel and an axial W porch under a massive tower and spire which reaches to over 60m. At the N side is a small octagonal vestry in the angle between chancel and aisle, otherwise the layout is symmetrical. The exterior walling material is selected local limestone, quarried in the hills to the S of Abergele. The general masonry is in snecked courses with a slightly picked finish, with raised pointing; featured masonry is in the same stone, thin jointed, chisel drafted or finely carved. The roofs are of slates trimmed to give a honeycomb pattern. In the nave roofs are 10 lucarnes each side, staggered (not opposite eachother), to light the interior; apparently similar lucarnes in the chancel roof are ventilators.
The nave is of 5 bays terminating at the E with a moulded coped gable and a finial cross. At the 2 eastern angles of the nave are small spires, each with an octagonal lower stage and crocketting on the ribs above. The N and S aisles have span roofs concealing the clerestory lights of the nave, and moulded copings to the E and W gables which blend with a parapet with corner gargoyles. Buttresses with offsets, including a pair of angle buttresses at E; a plinth, and string courses at the base of the windows and of the parapet. The aisle windows to N and S are of 2 lights, the windows to the W of the aisles of 3 lights, all with simple tracery, the tracery styles alternating in the aisle side windows. All label moulds are terminated with foliage or heads (some of which may be portraits). The chancel, of 3 bays, is similar with greater enrichment and 3-light side windows with more intricate tracery. The east window is of 5 lights with its tracery based on the Star of David, the S aisle E window is of 3 lights, and there are rose windows to the E of the N aisle and to the W of the tower over the entrance.
The tower is divided into 4 stages by string courses. Diagonal buttresses with only slight offsets, surmounted by gargoyles. Blind-pierced parpet. Two-light belfry openings with louvres and tracery. Above the W door is a circular window with tracery based on the Star of David beneath a crocketted canopy featuring a quatrefoil with the Bodelwyddan arms. Heavily moulded W door arch with Aberdeen granite nook columns.
The spire is slender, octagonal and lightly crocketted, divided into 4 stages by bands of diagonal tracery. It has a slight entasis. Two-light openings in the base stage, in the sides to the cardinal points with cinquefoil tracery and crocketted canopies; from the other sides slender flying buttresses pass through corner spirelets to smaller spirelets terminating the tower angle buttresses. The spire of King''''s Sutton, Northamptonshire, was the model for the design.
The vault of the Williams family lies externally at the N of the porch, with granite inscriptions attached to the porch wall.

It is the interior which has earned St Margaret's the name 'the Marble Church' from the variety of marbles used. The common interior stone is Talacre, but the dominant marbles are the red Griotte of the main chancel piers, which blends into the mature colour of the oak roof, and the Belgian Red of the nave arcades, which, perhaps intentionally, appears insipid by comparison.
The church is entered through a plain W porch, which leads by a double archway to the nave. At the centre are paired columns in Anglesey marble. The church is paved in Sicilian marble. In the porch the foundation stone, at left, has its inscription on a brass plate within a recess.
The nave consists of 5 bays of arcading, tall and narrow, with a 10-bay oak roof. The arcades are based on quatrefoil columns of Belgian Red marble with bulky foliage caps (carved by Henry Smith). These feature the rose, thistle, leek, shamrock and ivy. The roof principals rise above smaller Belgian Red marble shafts. Above the cornice at each side are 10 paired clerestory lights. These are separated by carved oak brackets supporting the feet of the arch-braces of the roof trusses. The spandrels between the arch-braces and the principals are pierced with foliations. The wallplates, the bearings of the trusses over the brackets and the collars are castellated. Light is admitted to the apex of the roof by 10 small staggered lucarnes each side. The aisle roofs are in 10 bays, with alternately braced and unbraced trusses, and with short green marble shafts at the principal positions carried on limestone corbels.
The chancel roof has large bosses (carved by Thomas Earp); roof principals with arch-braces with pierced foliation between, over Red Griotte columns with their colour heightened by contrast with bands and inserts of black Kilkenny marble. The chancel has wall canopies around 3 sides, those at E constituting the reredos, with Languedoc marble shafts and cusped nodding ogee heads of Caen stone and alabaster (carved by Harmer); at E the canopies have Povey marble inserted with painted inscriptions (the Lord''''s Prayer, the Ten Commandments and the Apostles'''' Creed).
The communion rails, choirstalls, pulpit (by Thomas Earp), lectern (1876, by T F Kendal of Warwick) and the pews are all in carved oak. The font (1862, by Peter Hollins of Birmingham - who also carved Lord Willoughby de Broke''''s tomb at Compton Verney) is in Carrara marble, featuring 2 nieces of Lady Margaret, who died young. The altar, reredos and communion rails of the War Memorial Chapel in the south aisle are in oak, to the design of W D Caröe, c1920. The pipe organ in the west gallery is by John Cowin of Liverpool. The bells are by the Whitechapel Foundry.
The middle windows of the chancel sides (c1880) are thought to be by Ward and Hughes; the others, including the E window and the W gallery window, are by O''''Connor, as are the 2 E windows of the aisles. Two windows at the W of the aisles (1881, 1896) and one adjacent on the N side (1910) are family windows by Ward and Hughes.

A leading work of the Victorian High Gothic movement in church architecture under aristocratic patronage, containing exceptional materials and craftsmanship.