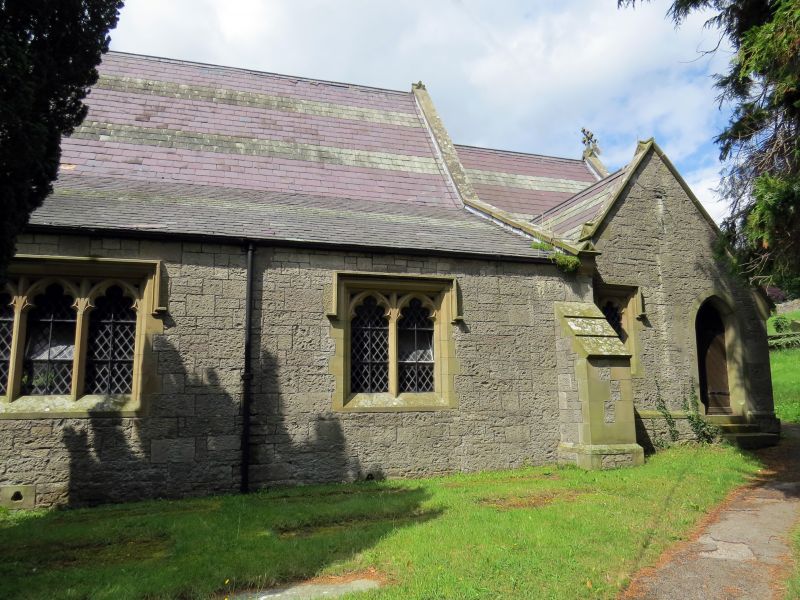 Location: At the centre of Bodfari Village, approached by a lychgate and long flight of steps. The orientation of the church is north east, but conventional orientation is assumed in this description. Stone chu

A church of Bodfari was granted to St Werburgh's Abbey, Chester, in 1093, and there are C13 references to it. Only the tower of the present church is mediaeval, with C15 belfry lights; the tower may be of earlier date but heightened at that time. An earlier dedication to St Deifer, the legendary C7 founder of this church, is recorded.
It became the church of Bodfari and Aberwheeler when a south aisle was added in the C17 'in an improved style' to accommodate the parishioners of the latter, their own Capel Hwlcyn having been lost; the aisle was described as separated by an arcade with five octagonal timber pillars. Lewis (1833) considered the old structure a neat edifice, neatly fitted up; to Glynne (1839) it was coarse and plain, and glaring with whitewash. It appears to have been entered at the west through the tower.
The body of the church was rebuilt to the design of T. H. Wyatt during the incumbency of the Rev. T. B. Ll. Browne in 1865. This was stated by Canon Browne have 'followed the exact line of the older church', but the earlier structure had made no distinction between nave and chancel, so the chancel of the present church cannot be altogether on the old foundations. The main benefactors for the rebuilding were Lord Dinorben, P. P. Pennant, Mrs Barratt and Miss Mesham. Wyatt, who had a very extensive practice, had recently worked for Pennant at Henlys and Miss Mesham at Pontruffydd. The pulpit of the earlier church, dated 1635, was incorporated in his redesign; this is stated to have come from Lleweni in 1715. The C16 octagonal stone font was re-carved. The C17 altar and the mediaeval parish chest were also retained. The chancel is the high point of the rebuild: it was paid for by Mrs Barratt and Miss Mesham, and incorporates high quality floor and wall tiling by Maw and Company of Jackfield, Shropshire.
A board in the porch records a grant in 1863 by the Incorporated Church Building Society.

The church consists of a C19 nave and chancel with a south aisle under a lower-pitch continuation of the nave roof; south porch; vestry at right angles to the chancel; and a mediaeval west tower.
The tower is in a mixture of stones, mainly limestone, about 15 metres in height, battlemented, with strong battering at the base and two massive low buttresses on the west side with a C19 window between. A mediaeval sanctus bellcote is formed under the battlements on the east face, with an arch between two merlons. Stone water spouts to north and south. String course at base of parapet; twinned belfry lights on all faces; slit lights below, that to west with trefoil head. Traces of limewash on the north and west faces. Clock (1912) on west face.
The body of the church is in the C19 Perpendicular style. This is in sneck-coursed grey limestone with pecked finish and yellowish sandstone dressings, with plain nave buttresses. Coped gables with cross over east gable; bases for similar over east gable of nave and gables of vestry and porch. Slate roofs with bands of contrasting colour on the south slopes. The east window is of three lights with bar tracery, the others are two- or three-light windows with cinquefoil heads, Tudor label moulds and relieving arches in the masonry over. Similar single-light window to east of vestry, with gable. The outer arch of the porch is open, with a double chamfer and a label mould terminating in crowned heads; quatrefoil lights to sides. Equilateral vestry door.

The church is entered by the porch at the south: flagged floor, roof timbering exposed. The nave has braced high-collar-beam trusses and is separated from the south by a four-arch arcade on round columns. The chancel and vestry are two steps higher, the chancel with a pointed barrel ceiling. The chancel and aisle arches are of two orders, that to the chancel carried on short corbelled columns. A chancel screen was removed in 1928.
In the nave is a fine Jacobean style pulpit dated 1635 of octagonal form, two panels high, with abstract carving in the upper panels and allegorical figures in the lower, separated by crouching figures above and herms below. The panels represent Faith, Justice, Watchfulness, Mercy and Prudence, in round-headed arches. It is said to have been brought here from Lleweni. There is also a fine mediaeval parish chest, iron bound, with three locks, and an octagonal font re-carved in the C19.
The chancel is paved in patterns in coloured tiles, and the east wall is tiled as an extended reredos for its full width with returns to north and south, in patterns in coloured and encaustic tiles; lettered tile frieze at top from John 15:13, mosaic centre cross and flanking mosaic alpha and omega.
Wall memorials include a list of rectors and charitable donors at the south door; three C20 brass plaques on north wall. Memorial to John Mostyn over the pulpit, 1671: broken pediment with arms. Memorial in chancel to the Rev. E Hughes, 1850: broken column with garland, inscribed base. On the west wall of the nave are memorials to Elizabeth Eyton (1813): urn above inscribed and bracketted tablet; to Thomas Eyton (1837): ornate Grecian style; ornate memorial to Ann Hughes of Wern, Denbigh (1840), draped urn and acanthus consoles.
The east window is by Clayton and Bell, 1866, to Mrs Barrett of Pontruffydd; Christ and scenes of charity. At east of north side a window by Burlison and Grylls, to Elizabeth Mesham of Pontruffydd, 1909. At west of south aisle another by Burlison and Grylls, to Margaret Elizabeth Mesham, d.1873, with a scene of charity.

Listed at grade II* as a church retaining a fine mediaeval tower, coherently rebuilt in the mid-C19 with especially fine chancel finishings.