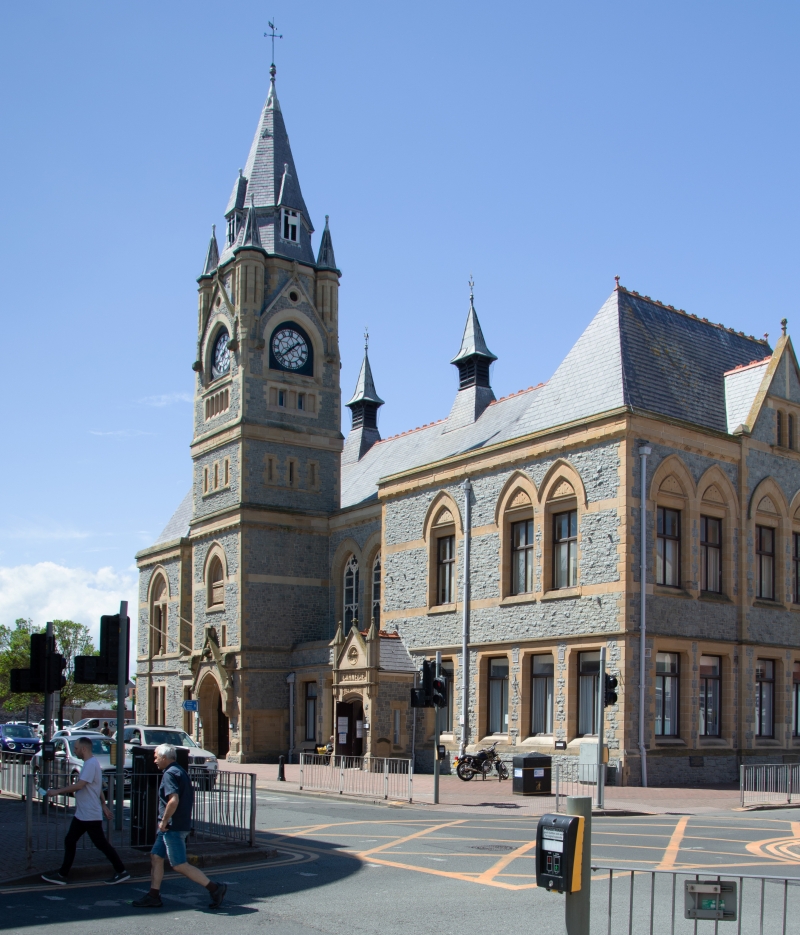 Location: In the centre of the town, on a plot bounded by Queen Street and Water Street.

Built in 1874-6, to designs of Wood and Turner of Barrow, for the Rhyl Improvement Commissioners. Extended in similar style by the addition of a Carnegie Library in 1906. The building was not the first town hall on the site, since a previous town hall (itself replacing an earlier hall on High Street) had been built in 1855. The building was designed originally to house the County court, a petty sessions room, offices for the commissioners, a police station, and fruit, fish and corn-markets, and the main hall was used for entertainment and public functions. It was extended and remodelled internally, 1986-90.

French gothic style. Snecked grey rubble with gold freestone dressings, and steep slate hipped roofs with ridge cresting, and swept slate aprons to paired louvred turrets. Balanced asymmetry to entrance front, resulting from its extension in 1906 with the addition of the library block to the right. Main hall block is symmetrical about the central entrance tower: This has corbelled gabled porch with squat pilasters carrying tooled but unfinished blocks of stones forming kneelers. Similar unfinished blocks of stones forming kneelers. Similar unfinished stone-work in apex of gable. Blind traceried window above, set with unfinished block (probably intended to house inscription). Clock beneath gable, between octagonal angle turrets in octagonal upper section, which terminates in a short tiled spire with lucarnes and weather vane. Flat-roofed bays link the tower at ground floor with projecting outer pavilions; these bays have
3 shouldered windows (glazing renewed); above them are 3 traceried windows to either side, which light the main hall at first floor level. Corbel table to moulded eaves cornice above. Left-hand pavilion block forms part of the original building, a single window range, with full-height recessed arch containing 2-light mullioned window to ground floor and similar window above, divided by a pier. Heavy blind tracery in apex of arch. Return elevation facing Water Street of 5-bays with central entrance porch, formerly providing main entrance to main hall. Chunky moulded arched doorway and steep coped gable to porch. Flanking bays are arcaded by full-height sunken panels, with heavy corbels to flat heads in the outer bays, and chequerwork tympana to arched heads of 3 central bays. Shouldered windows similar to those in main elevation. To the right of the main range facing Wellington road, the Carnegie Library was added in 1906. It projects from the main hall range to balance the pavilion block to the left, and comprises a 3-window range. Gabled porch to its left, with clustered pinnacles to either wide of gable, and shallow arch lettered ‘Carnegie Free Library’. 4 ground floor shouldered windows with renewed glazing, and arched upper windows with incised decoration in tympana beneath hood moulds which form continuous band. 6-bay return elevation facing Queen Street is similarly detailed.

The original layout and much of the detail were modified on remodelling, 1986-90, but with the main hall at first floor level survives. 9-bay hall with W gallery, with chamfered and braced roof trusses sprung from wall-posts, and strengthened by wrought iron ties. Ceiling at collar level. Ornate plasterwok surrounds proscenium arch of stage at E end.

A good example of civic Gothic architecture which is an important feature in the centre of the town, and a striking monument to Rhyl’s burgeoning urban status in the latter part of the C19.