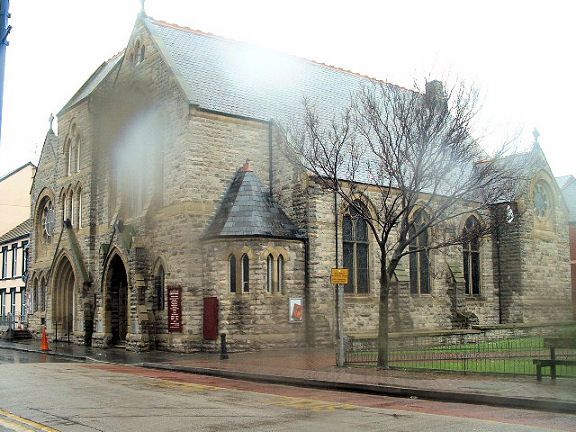 Location: Fronts on to the street, its side elevation facing the rear of the town hall across a square.

Established as an off-shoot of the Welsh Independent Church, Queen Street, the English congregation built its own chapel on this site in 1858. This was demolished and the present building constructed in 1885, to designs of Owen Edwards, architect, of Rhyl.

Gothic style, with an unusual configuration of elements, the lecture hall, stair tower and chapel each given separate expression in the western entrance facade to Water Street. Rock-faced coursed and squared rubble with freestone cornice and sill bands; slate roofs with tiled cresting. Chapel is to the right, saddlebacked stair tower in centre, and gabled lecture hall to the left, with high single storey porch projecting from its north wall. Simple arched doorway in porch, and triple lancets below rose window set in arched panel with hood mould in asymmetrical gable of hall. Central tower houses the main entrance to hall and chapel, in a very deeply moulded archway set beneath a shallow gable projecting only slightly from the tower wall. Triple lancets above, and plate traceried window in the upper stage, with trefoiled hood mould. West gable of chapel has gabled porch clasped between gabletted buttresses, with plate traceried composite window above. Doorways all have plain plank doors with ornate strap hinges. South elevation is divided by buttresses into 3 bays, each with 2-light plate traceried window; gable of organ chamber to E, with rose window in arched panelled recess. Small polygonal bay with paired lancet windows and steep canted roof, in SW angle of nave and western narthex. Shallow canted projection from east wall, with small plate traceried window set high up.

The chapel has narrow western narthex beneath gallery, and is otherwise undivided internally, its wide span roofed by a hammerbeam roof with pierced panelling in the spandrels and fluted corbels to wall posts. Timberwork is all heavily moulded and chamfered. Wrought iron tie rods and posts; the main trusses linked by arcade braces. Narrower western bay is filled by gallery, with pierced and foiled frieze to panelled parapet. Original screen below, dividing small entrance lobby from body of church. Shallow canted recess to east with traceried wall panelling is occupied by pulpit. Organ in shallow gabled transept to south. Seating appears to be contemporary with building of chapel. Stained glass in 3 S windows, commemorating the dead of World War II. North windows are similar in form to those of south, and provide borrowed light for the lecture hall alongside.

Stairs to galleries of chapel and lecture hall occupy the tower. Lecture hall is lit almost entirely by borrowed light, from the chapel to the south, and from the rose window in the screened-off room occupying its western gallery. Additional light is provided by lancet windows behind stage to east, and by sky-lights. Hall is 5-bays, with cambered trusses carried on wall posts, boarded above the collar.

A distinctive architectural composition which forms part of a group of buildings centred on the town hall.