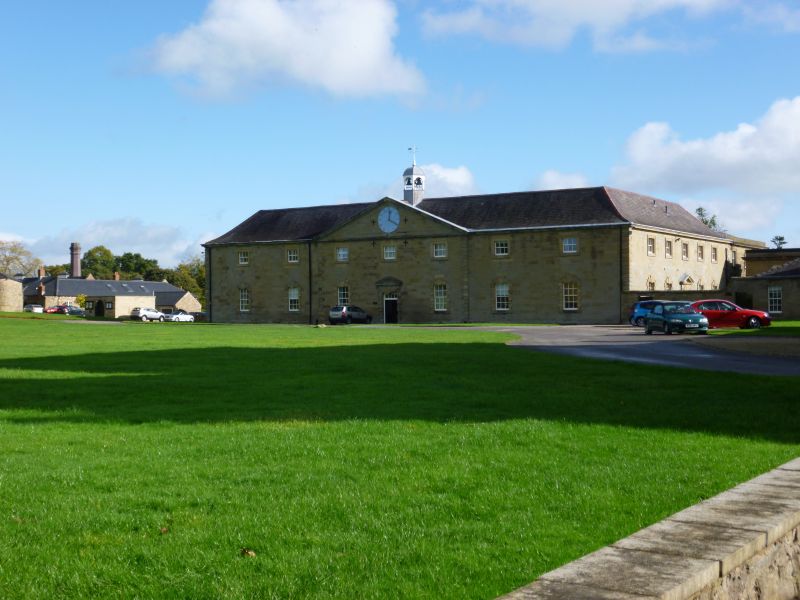 Location: Set in an important landscaped park 1.3 km SE of Ruabon and reached by a private drive running S from Broth Lodge on A539.

Former principal seat of the Williams-Wynn family, one of the most powerful families in North Wales. The estate passed to Sir John Wynn in the mid 17th century; of this period only the stone tower of 1706 survives. The house was enlarged and remodelled in 1736-8 by Francis Smith of Warwick and his son William, who also designed the stable block. A large assembly room was added in 1770. James Wyatt carried out some works for the 4th and 5th baronets but ambitious schemes for wholesale rebuilding were not realised. A campaign of works in the early 19th century included recasing the building, which was probably carried out by Benjamin Gummow. Further works by C.R. Cockrell and Benjamin Ferrey were in hand when a fire destroyed much of the building apparently leaving only service areas and the stone tower relatively untouched. Ferrey was engaged to rebuild and the choice of French Renaissance style is said to be the 6th Baronet's who was influenced by French buildings of the 1850s. The building was converted for use as a school in the mid-C20 which resulted in extensive internal remodelling.

C16 French Renaissance style. Sandstone ashlar, slate and some areas of sandstone rubble. The principal elevation faces south. To the left a 3-storey corner tower with rusticated quoins and pilasters in the upper storeys, a tall pavilion roof with tall altered chimneys and a dormer with shell niche, iron brattishing at the top. Attached 5-window 2-storey range with fishscale roofslates and pilasters to upper floor. Long wing projects at right angles consisting of range lit by tall mullioned and transomed windows and a 4-storey tower with pavilion roof. This had theoriginal port-cochere entrance which is now blocked, above this is an oriel rising through three storeys capped with a lead domed roof flanked on each floor by shell-headed niches. To the right a further 2 storey range, a 3 storey tower and a later single storey block with similar though slightly simplerdetailing, and a range with steep roof and a polygonal front. A further range is stepped back with the right hand return having twin circular towers with conical roofs. The west, left hand return side has an altered entrance and entrance portico now consisting of two square section cast iron columns.

To the rear the work of 1858 returns and is joined to a long 2-storey 11-window range with central pediment of early C19 character. A 3-storey block attached to the left is uncoursed rubble with roughly dressed window surrounds with a deep cornice surviving on the return south elevation (now enclosed); Ferrey added the third storey to match the main building. Various attached buildings and walls of various dates to courtyards.

The work of 1858 seems to have partially followed the footprint of the previous building and incorporated elements of it especially to the rear, northern side. Vaulting at ground floor level suggests the building may be of fireproof construction. Reception and guest rooms in the west wing are separated from the private family rooms on the east side by the main hall but in other respects the plan lacks coherence. Entrance through the former port-cochere led to the hall which rises through two storeys and is lit by tall mullioned and transomed windows. Dado and gallery of oak panelling; the gallery contains a fine organ by Snetzler with a case designed by Robert Adam in 1774. French Renaissance style chimneypiece incorporating the Wynn arms, deeply moulded maple ceiling with five pointed stars. A painted frieze has extracts from a Welsh poem. Doors in an ornate oak surround lead off to the left to the library which has coffered oak ceiling, ornate oak door and window surrounds with restrained guilding. Other reception rooms, which have been subdivided, have deeply moulded plaster ceilings with heraldic motifs and carved oak medallions depicting Bibical scenes set in the walls.

Top-lit staircase hall, Renaissance style stair and green marble door surrounds probably date from a late 19th century remodelling when the main entrance was moved to the west side. Tall vaulted corridors are lit by lunette windows and have floor tiles by Maws some with the date 1858. Dadoes are mosaic tiles in geometric Islamic style pattern by Simpson. Suite of family rooms to east have vaulted ceilings some with stencilled decoration. Billiard room of later C19 date replacing glass house; a further family room has a board and beam ceiling, shutters and doors which are richly stencilled, a Renaissance style chimneypiece incorporating marble roundels with relief designs copied from Thorwaldsen's Night and Day. Extensive service areas have narrow stairs of blue-black slate and incorporate at least two earlier phases of building.

A stone tower of 1706 is now embedded in the service area. Built of sandstone and of square plan with attached square stair tower. 3-storeys with domed stone roof and ball finial to staircase turret, modern temporary roof to remainder. Entrance on south side to stair tower is heavy studded door, spiral stair lit by square and oval windows some blocked. An iron safe is set into one wall. Access to upper floor room isblocked. Ground floor room is tunnel vaulted and is entered from the west side.

Grade II* as the former principal seat of the Williams-Wynn family which retains much of its mid-C19th character and is associated with an important landscape and a range of estate buildings and monuments.