A Grade I Listed Building in Holt, Wrexham 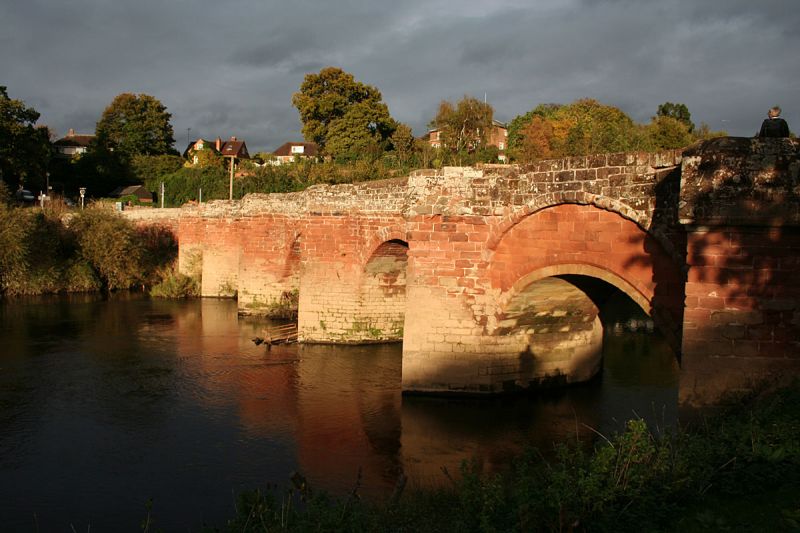 Location: Spanning the broad River Dee which forms the boundary between Wales and England. Carries the main road, formerly the A 534, between Holt and Farndon

Medieval road bridge of uncertain date. In 1368 a trial at the County Court of Chester refers to a bridge between Farndon and Le Holt, with a fortified gateway, constructed by John, Earl of Warenne; it states that the said bridge was built in the 12th year of the reign of Edward III which would be 1338-9. However the present structure, which has no fortified gateway is more likely to be C15 or C16. Leland recorded "a great stone bridge on Dee Ryver" and it was also described by Pennant in 1778 - he mentioned 10 arches so one may have been lost at E end. Civil War damage; modern restoration.

Built of local red sandstone. 8 segmental arches cross the river, separated on both sides by prominent pointed cutwaters with refuges, and a 9th arch exists in the causeway on the Welsh side. Narrow, single carriageway, bridge with gently ramped roadway spanning approximately 84m. Stringcourse to base of parapet and chamfered voussoirs to 2-order arches which are of varying height suggesting alterations. The 3rd arch from the Welsh bank may mark the position of the gateway or guardhouse with drawbridge - see the high arch ring and masonry changes. Pitched stone coping to parapet. Modern resurfacing of roadway. At E downstream side the parapet is corbelled back at a skewed angle to end in a simple pier; on upstream side the parapet turns N with the line of the road and tapers down to a low pier; modern railings although sockets for older railings exist. At W the parapet continues on both sides along a causeway across low lying ground; turns S and tapers, cut on downstream side and ending at gated entry to field on upstream side.

Listed Grade I for its medieval origins and as one of Wales' most important bridges.