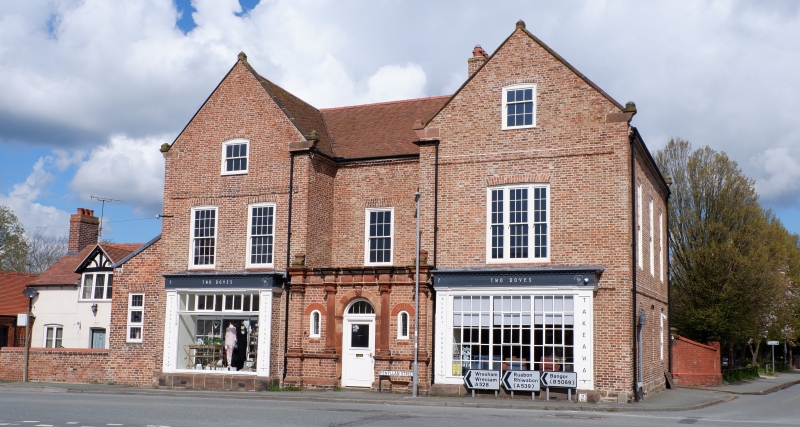 Location: Prominently sited on the SE side of Overton at the crossroads of the A 539, A 528 and B 5069; on the corner between Pen-y-llan Street and Church Road.

Late C17/early C18; possibly built in 1707 - see date on cottage attached to left. Largely refenestrated in C19 and given a free-Classical porch, probably c1885 when it became a private house; shop-fronts added later. The building has had a varied history. It is first recorded as the Gwernhaylod Arms PH and then became The Bowling Green Inn as the Bowling Green field was in the same ownership; it served as Overton's main posting inn. In 1885 it was renamed Gwydyr House on becoming the private residence of L W H Tringham who lived here until he inherited Nerquis Hall. More recently it has been recorded as the Co-operative Stores and was last in use as a garden machinery shop.

Substantial, H-plan, 2-storey and attic, red-brick building with tiled roof and brick chimney offset to right; sandstone plinth and dressed stone gable copings and kneelers. The original brickwork is of irregular bonding and is given relief by bands, of three courses each, over ground and 1st floors; moulded brick cornice retained to centre. Dominant gables project either side of recessed central bay, infilled to ground floor by porch. 2-window gable to left, 1-window to right, both with camber-headed, voussoired, windows; the central window is square-headed. All flush-set windows with various horned sash glazing; 6-pane to attic left, 9-pane to right, 12-pane to centre and outer 1st floor windows only have glazing bars to upper sashes including tripartite window to right. Blocked window to inner side of right hand gable but no corresponding opening to left. Late C19/early C20 shopfronts with dentilled cornices applied to ground floor squared bays, fully small-pane glazed to right. Added and slightly advanced central porch enriched in a free-Classical manner that is stylistically in-keeping with the late C17/early C18 origins of the building. Ionic brick pilasters at either end and fluted Ionic stone columns flanking the doorway, all on high bases, carry a stone entablature and cornice which is pulvinated over each upright as well as to centre over a stylised acanthus keystone; volute brackets above at either end. Round-arched entrance with freestone voussoirs flanked by similarly arched leaded lights with brick voussoirs; fanlight and modern door. Lean-to at left with coloured glass window. Cement rendered left hand side concealing moulded brick cornice as on front; cut down chimney stack and 2-light window. Formerly 3-window right hand side has blocked, camber-headed, openings except for one twin-transom window to ground floor; similar brickwork detail. At rear the gable end of the corner (eastern) cross wing projects further but the 1 and 2-window arrangement is repeated. Facing the rear the left hand gable has timber hoist over large blocked opening to 1st floor and a doorway in tripartite frame below. To centre are a pair of fine cross-frame, leaded and square-headed, windows; tiny attic window cut into cornice; hipped lean-to below with horned sash. Right hand gable has camber-headed, horned sash to attic over two multipane sqaure-headed 1st floor sashes; inserted doorway below.

Disused at the time of inspection.

Listed for its special interest as a large late C17/early C18 town building retaining some original glazing and brick detail.