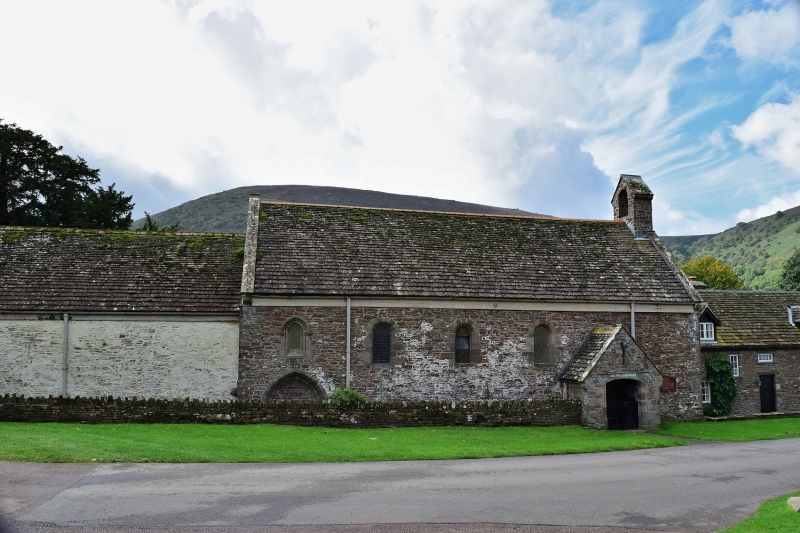 Location: 50m south of the Priory buildings at Llanthony.

Probably C12 in origin; it is said to have been built by William de Lacy and consecrated in 1108. It is supposedly built on the same site as a small chapel which was C8 or earlier and was built to commemorate the possible stay in the valley of St David himself. This may however refer to a different church which was the forerunner of the Priory Church. This building may in fact have been the Infirmary Hall and Chapel of the Priory. There are views both that the two sections are contemporary and that the chancel predates the nave, in the late C12 and in the C13. The exterior walling appears to be basically medieval, but to have been much rebuilt in the late C19. The church has remained largely unchanged since its Victorian restoration in 1893 when the porch, the nave floor, the windows and the roof were all rebuilt. The parish was transferred from St David's to Llandaff in 1844, It was joined with Lower Cwmyoy, Oldcastle and Llanfihangel Crucorney in 1969 and has been in the Diocese of Monmouth since 1921.

Roughly cut red sandstone random rubble, the walling considerably rebuilt in the late C19, the chancel is painted, sandstone tile roofs. Nave and chancel, with north porch, and bell turret on west gable; the church is oriented to March 1st, St David's Day. Plain rectangular nave with four narrow round arched windows on the south wall and three on the north wall with a pointed window with dripmould at the east end. Opposing doorways at the east end, the north one being larger. Gabled C19 porch with pointed arched door within. The chancel is blind on the north wall and has two round arched windows on the south, paired round arched windows on the east wall. All these features are C19 with the possible exceptions of the north doors. The south west corner of the church is particularly of the C12 with a battered plinth, long and short quoins and a blocked round headed window. Stone verges to the gables, cross on chancel gable.

The interior walling, rere-arches etc. appear medieval, but tided up in the C19. Unusual stilted chancel arch, this rebuilt in 1893 (inscribed). The nave has a seven bay arch braced collar beam roof, with wind braces in the C15 manner, this appears to be original but much repaired in 1893. The chancel has a waggon roof now stripped of the plaster vault, and with closely spaced arch braced collar beam trusses. These are possibly C16, while the sarking above was replaced in the C19. The pews may be early C20, the font is medieval, possibly C12, the pulpit is Victorian, but entered through an opening in the wall cut for the Rood loft stair in the C16. Early C18 Communion rail. Especially good engraved early and mid-C19 slate wall monuments in the chancel, with some also in the nave. Particularly good are those to Ann Lewis, died 1818, Susan Lewis, died 1852, and to Thomas Lewis, died 1854, signed by John Pritchard of Longtown. There are also good earlier engraved floor slabs. The fireplace on the west wall, there were once two visible, add strength to the claim that this was the Infirmary Hall of the Priory. The bell is dated 1792.

Listed grade I as an historically important church and a probably complete surviving monastic building.

Important group value with the associated buildings of Llanthony Priory.