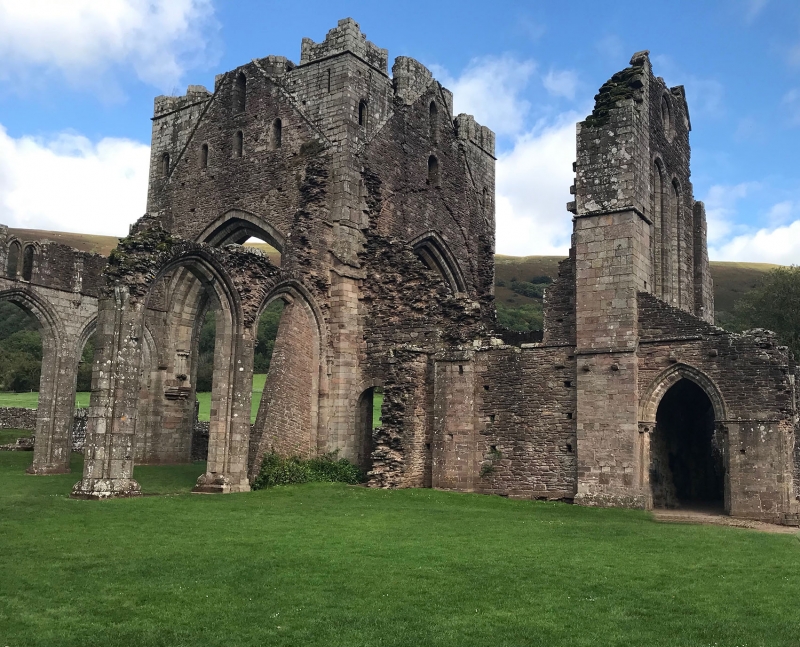 Location: In Llanthony village in the Vale of Eywas.

Llanthony was a priory of Augustinian Canons that was founded c1108-1118 but after 1136 there was a gradual move to the new settlement of Llanthony Secunda at Gloucester. A church was dedicated to St John the Baptist in 1108. This had been built by Hugh de Lacy who earlier had built a hermitage on the supposed site of a Chapel founded by St David himself. This church may however be the forerunner of the present Church of St David (qv). The priory church is mostly late C12 and early C13, and was hardly built before the Priory was in decline following Welsh raids. There were several other changes of fortune before Dissolution in 1538. Meanwhile the English cell flourished so much that in 1481 the original Llanthony was reduced to that of a priory cell of Llanthony Secunda, reversing the previous relationship between the two priories. The estate was purchased by Walter Savage Landor in 1809 for £20,000, and it may be that he did some work on this building, but the ruins suffered from extensive stone robbing over the centuries and evidence of this can be seen in nearby buildings. The Buck brothers recorded the appearance of the Priory in 1732, but there has been considerable change since then. The east front fell in the late C18; the south front in 1803; the south nave arcade in 1837; the tower was largely demolished by the Llanthony estate in the mid C19. The estate was dismembered finally in 1963 when the Abbey was bought by the present owners the Knight family who had been the Landor agents for more than a century and had lived in the Priory. The ruins were now placed in the guardianship of the Secretary of State for Wales and are maintained by Cadw. A programme of excavation and consolidation of the ruins began in 1978.

The surviving ruins of the Priory are built of local red sandstone ashlar and rubble with much surviving carved work. They form the whole of the church ground plan, most of the west end; the walling and entry below the west window and both the towers to three stages; the north nave arcade with triforium; the west wall of the crossing tower; a lot of the south transept, a little of the north transept, and varying heights of walling to the east end. The north and south aisles hardly survive at all. The nave is said to have still been unroofed in 1504, but whether this means it never had a roof is not known; it may just mean that it was unvaulted and had a timber roof. To the south of this are the vaulted entry to the cloister (slype) and the base walling of the Chapter House. These survivals are of two distinct architectural characters. The east end and the transepts are Transitional and date from c1175-1200; there was a grant for this work from Henry II. The nave and west end are Early English and date from c1200-1220. The Chapter House dates from the mid C13 in a rather later Early English style.
Characteristics of the design are the two storey elevations, the arched windows framed by Romanesque colonnettes at the east end, and the very typical lancets and multi shafting at the west end where the West Country style is most evident and includes concave backed niches. Also continuously moulded north arcade. The nave has six even bays west of the crossing and then two wider bays going into the west front. Waterholding bases feature to the colonnettes both in the nave and in the Chapter House, which also had a five order recessed entrance.
The only surviving vaults are the two bay rib vault in the eastern entry (slype), and in the undercroft to the Prior's Lodging now the Abbey Hotel (qv).

Grade I as an important medieval monastic ruin with high quality surviving detail.