A Grade I Listed Building in Grosmont, Monmouthshire 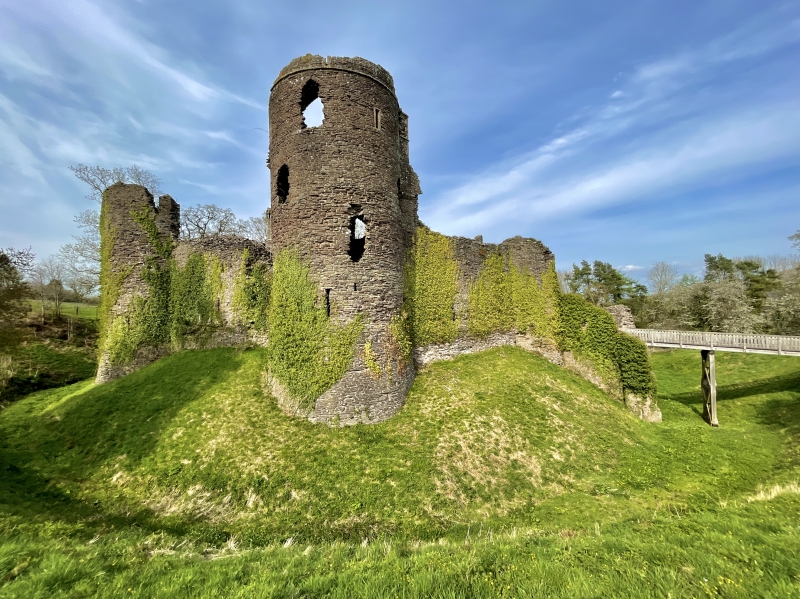 Location: On a flat elevated plateau, some 100m NW of Grosmont village, approached along a narrow lane from the main street.

Following the initial conquest of the Welsh kingdom of Gwent by William Fitz Osbern, Lord of Breteuil in Calvados, between 1067-75, the Normans built a triangle of castles - Grosmont, Skenfrith and White Castle - to control their newly won lands. These late C11 defences would have been of earth and timber. At Grosmont the great ditch of that ringwork castle still survives, the perimeter of which would originally have been protected by a wooden palisade and timber gate tower.
In July 1201, King John granted the three castles to Hubert de Burgh, who completely rebuilt Grosmont in stone, beginning with the rectangular hall-block (1201-4). Work stopped in 1205 after Hubert was captured whilst fighting for King John in France. Whilst he was still prisoner John granted the three castles to William de Braose of Abergavenny, in royal favour at the time. A prolonged dispute over the ownership of the castles then ensued, but in December 1218 this was settled by the King's Court in Hubert's favour. Hubert regained possession of Grosmont and between c1219-1232 embarked upon a major rebuilding programme, replacing the timber defences by a stone curtain wall with round towers at the angles, in the defensive style of the early C13.
During the C14, the Earls of Lancaster carried out various alterations to Grosmont. The buildings around the inner ward were remodelled c1330 (either by Henry of Lancaster or his son, Henry of Grosmont) and alterations were made to the northern chamber block, including the addition of an elegant octagonal chimney shaft, and to the gatehouse which was extended to incorporate a drawbridge.
The last fighting at Grosmont took place during the war of Owain Glyndwr, who attacked Gwent during the summer of 1404, but was defeated at the battle of Campston Hill. In 1825 the Duchy of Lancaster sold the ruins to the Duke of Beaufort and in 1923 they were given to the state by Mrs Frances Lucas-Scudamore.

C20 wooden bridge gives access to inner ward of castle, the surviving ruins are built of local red sandstone rubble and ashlar, and form the complete ground-plan of the castle with hall block to east and curtain wall to west. Much of SW tower of the curtain wall stands, but few remains of gatehouse survive. Hall Block, originally two-storeys with upper hall. Raking plinth, west corners have ashlar quoins. Ground-floor has tall, narrow lancets: four in each of the long walls, one in the NW wall and two on SE side. The interior shows that the taller, corresponding lancets at first-floor level were originally set in wide segmental headed openings. Two of these survive, either side of the hall fireplace at S end. Below, a stone spiral stair (formerly linking ground-floor with upper hall) is set in an embrasure in left corner. In centre of hall block are remains of a stone partition wall, probably dating from the remodelling of c1219. SW Tower once formed one of three round towers of the C13 curtain wall, but in C14 the rear facade was rebuilt and enlarged. This courtyard front is buttressed with a tall pointed entrance arch on ground floor and, above, a single opening at first and second floor levels. Interior has deep circular basement, ground-floor chamber has three archers loops in splayed embrasures with two-centred arched heads. Access to upper floors, largely rebuilt in C14, is by spiral stair to right of entrance arch. First floor has three windows in arched recesses facing west. Each of the floors has a fireplace on the NW wall, including upper floor fireplace with chamfered jambs. Northern Block was built on site of third tower of C13 curtain wall, demolished when C14 block was built. The most notable surviving feature of this building is the elegant octagonal chimney with slender shaft rising from a raked and moulded base to delicately worked trefoil headed gablets on each face and a coronet-like top above.