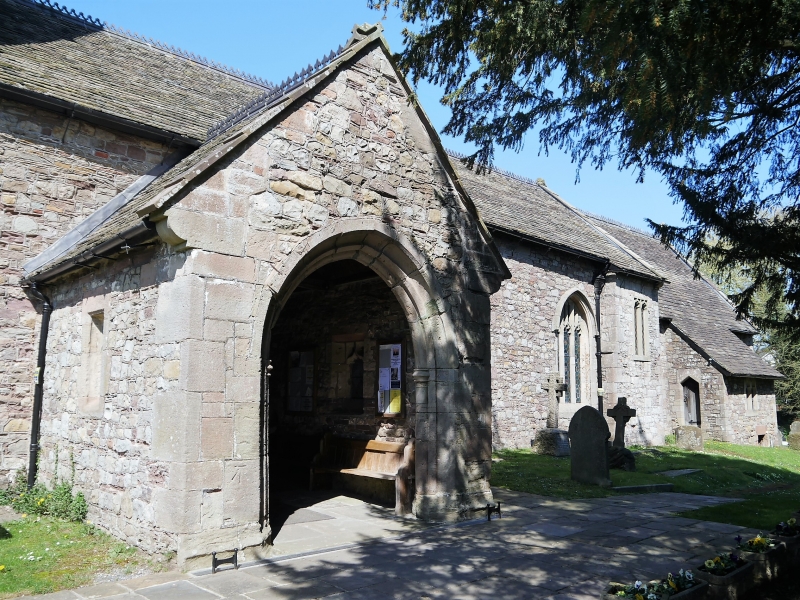 Location: Situated by the principal crossroads in Raglan, in a churchyard contained within a stone wall which is entered by a C19 lychgate.

Anglican parish church, mostly C15 and C19. First church probably built by the Bluets, who held the castle from the C12. Rebuilt in the C15, and enlarged by the addition of the Beaufort chapel to the NE probably by Sir William ap Thomas, who held the castle 1432-c1445. There were legacies for enlargements from his son, William Herbert, 1st Earl of Pembroke, in 1469, and his grandson William, 1st Earl of Huntingdon. The church was badly damaged during the seige of Raglan Castle by Parliamentary troops in 1646 including the destruction of much of the Beaufort chapel and its monuments. Restored 1868 by T.H. Wyatt for the 8th Duke of Beaufort, including the addition of a N aisle (now Lady Chapel) running W from the Beaufort chapel, the rebuilding of the top stage of the tower, new vestry, windows, roofs, fittings, and stained glass.

Nave has C19 barrel roof of 12 x 8 panels and 2-bay C19 N arcade of moulded 4-centred arches on moulded shafts. Segmental-pointed W tower arch dying into jambs, wave-moulded, triangular-headed tower stair door to left. W door has 4-centred rear arch. Two nave S windows have moulded rear arches. Rood stair door is moulded 4-centred and has stone steps within but walling cut away in C19 to allow stairs to be used as access to pulpit. Chamfered chancel arch dying into sides, with C19 hoodmould. Chancel has C19 boarded panel roof of 11x 10 panels with brattished wall-plate. Chamfered pointed S door to C19 vestry. Fine N C15 2-bay arcade to NE or Beaufort chapel. The piers with shafts and hollows similar to porch S door, the arched 4-centred, wave and hollow mouldings. A C19 blind 2-light pointed window to right may be a restoration of an original window blocked when Beaufort chapel was added.
N aisle has C19 scissor-rafter roof and C19 arch to Beaufort chapel, imitating chancel arch. The Beaufort Chapel has C19 11x8 panel roof.
Monuments: Three much mutilated fragments of recumbent effigies, two of which are said to be the fourth Earl of Worcester and his countess. Fragments of a destroyed alabaster canopy formerly of the tomb of William, third Earl of Worcester as set out in his will of 1588 remain in the N wall above the effigies. A family vault beneath contains many of the family from this date until 1704. On chancel S wall an attractive later C18 plaque with fluted border inscribed just 'Margret Pytt' and adjoining oval memorial with urn and cherubs to William Pitt d 1779.
C19 font, the bowl with 8 angle shafts on non-matching round base said to be the original, but if so heavily retooled. Curious late medieval 3-sided carved stone fragment on floor adjoining, cylindrical within. C19 timber pulpit with 5 blind tracery timber panels, apparently C15, and said to come from a lost rood screen. Early to mid C20 chancel fittings. Organ of 1909 by Sweetland of Bristol at E end of the Beaufort Chapel.
Stained glass: fine E window of 1868 by Lavers, Barraud & Westlake of London, in memory of Philip Morgan of The Broom, Nativity, Crucifixion and Resurrection, with finely drawn figures and pre-Raphaelite colours. W tower window, SS Peter, John the Baptist, and Paul, of 1875, said to be by Lavers & Barraud, but of much more conventional design. Most of the other windows have patterned glass of 1868, clear and red panes with faded pale yellow Alpha and Omega and IHS quatrefoils. In the Beaufort Chapel fine armorial glass in E window of 1872, commemorating the marriage of Lord Henry Somerset to Lady Isabel Somers Cocks. Historically significant N window to Field Marshal Lord Raglan (1788-1855), with 12 plaques listing his campaigns from Denmark 1807 to the Crimea, erected by subscription of over 600 non-commissioned officers.

Graded II* as a substantially restored medieval church retaining some C14 and C15 detail within a consistent C19 restoration and enlargement. Important if fragmentary remains of the tombs of the Somerset family.