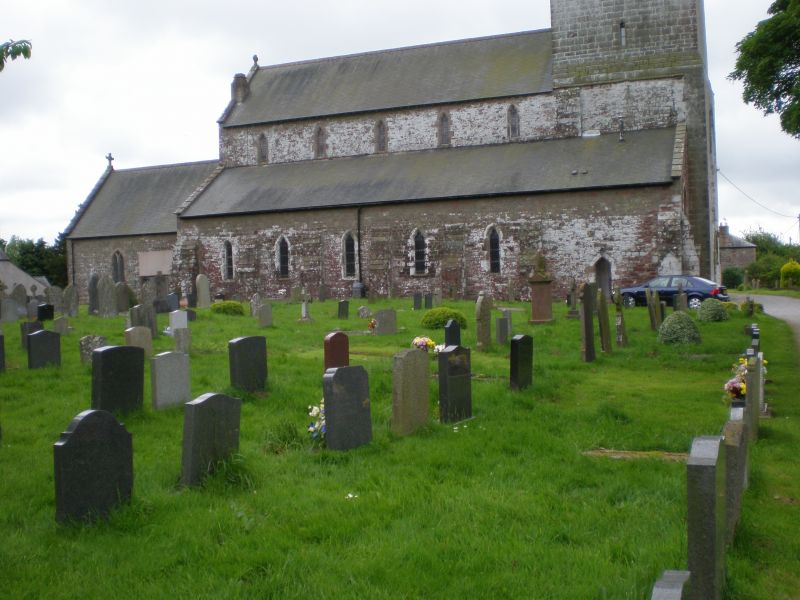 Location: Prominently sited in the centre of Trellech village.

With the exception of the south porch the church appears to be of one build, probably of the early C14, and is almost all in a simplified Decorated style, apart from the west window in the tower which has reticulated tracery. The only stylistically different feature is the priest's door which seems to have been reconstructed with a semi-circular head to match the outer arch of the porch. The relationship of the tower to the rest of the building is uncertain, the east end of the north wall is of one build with the north clerestory, but there is then a slight vertical offset, and on the south side a similar offset comes at the junction of the tower and the clerestory. This suggests that the tower may be an addition, but if this was the case, it will have replaced a sixth bay to the nave, since there is nothing to suggest that the aisles were lengthened. Alternatively the tower may have been an addition made during the course of building, since its windows are of comparable date with those in the rest of the church. The tower is recorded as having partially collapsed in a storm. The rebuilding, especially of the spire, may date from 1792 which date is on the weathercock. The porch is probably C17 or C18, presumably a replacement for an earlier one in the same position since the inner door is dated 1595, but this might have been reused from the blocked north door. The church had a major restoration in 1893, with changes in 1903, and another restoration in 1992 when it was re-roofed, re-floored and redecorated.

The church is constructed from local sandstone grading into conglomerate, mainly red in colour, but tending to grey in some places, the same sandstone is also used for the dressings except for the north east, north west and south east windows of the chancel which have yellow sandstone dressings.
The church consists of a nave with two aisles and a clerestory, separate chancel, a west tower and a south porch.
The lower nave walls are covered entirely by the aisles which begin in line with the east gable and stretch almost to the west wall of the tower. The north aisle has five bays with single light windows with trefoil heads; the bays are separated by wide, stepped buttresses. The bay against the tower is wider and has a door with a 3-centred head. Corner buttresses, coped gables to a lean-to roof. The east wall has a 2-light window with quatrefoil over. The south aisle is similar except that the tower bay is blind and the second window bay has the south porch which is gabled and has a semi-circular headed archway, and square headed windows in the flanking walls. The most easterly bay of the aisle is also blind. The east wall has a 3-light window with sharply pointed lights stepped within the frame, only the central light has a trefoil head. The nave clerestory has five trefoil headed lights on either side. Coped gable with apex cross, the east wall above the chancel roof is blind. The west tower is square and in three stages with the aisle roofs coming well up the second stage and the nave roof well up the third. West door with 2-centred head and dripmould over, Victorian doors. Above this is a large 4-light reticulated window. An off-set goes round the tower above this and the third stage may be later, two tiers of slit windows on each face. Battlemented parapet on corbels. Octagonal spire with a 2-light gabled bell opening in-line with each face of the tower, roll at each angle of the spire. The spire carries a ball, and a weathercock dated 1792 at a height of 180' (164.6m). The chancel has a 2-light window with cusping on the south wall together with a plain single light one and the priest's door with a hollow chamfered round arch, both these are Victorian rebuilds. The north wall has another 2-light and a single light window as before. The east wall has a 3-light one with trefoil heads to the equal lights, and these are topped by a sexfoil flanked by trefoils. This window is very close in design to the east window of the Church of St Oudoceus at Llandogo. Coped gable with apex cross.

The whole of the interior is plastered and painted, and the floor was repaved in the 1992 restoration. Sharply pointed arcades of tall octagonal piers. Tall chancel arch which was heightened in 1893; which is similar to the taller tower arch. Photographs in the church show that the chancel arch had an almost triangular head springing from a point appreciably lower than the present arch, the mouldings appear to be the same as those used in the replacement arch. The nave ceiling is flat and coffered, with diagonal boarding above the ribs; it is four panels across. The aisle roofs are Victorian with arch braced principals on stone corbels between each window. The rere-arches of two of the north aisle windows are cusped. The chancel is ceiled with an 1893 painted waggon vault. The main door is dated 1595 (the date is painted on the inner face). It is of plank construction with decorative battens applied over long strap hinges, but it is covered on the outer face by a matchboard sleeve. The pews are 1893. The pulpit is said to be dated 1640 but was reconstructed in 1893. The choir stalls are 1903. The communion rail is early C18 with turned balusters. There are two fonts, one free-standing and early medieval, the other recut and later. There is an excellent C17 sundial dated 1689 in stone which once stood in the centre of the village and was removed from the school in 1895, and also a concrete cast of it. Coat-of-Arms of Charles II dated 1683 over the west door. The chancel windows on either side are a memorial to Henry Arden, vicar of Trellech 1887-94. The east window is a memorial to Henry Crompton Robert d1891. There are said to be three bells dated 1642, 1704, and 1704, plus three new ones, all installed in a new steel frame for 2000.

Included and highly graded as an exceptionally fine and well preserved medieval church.