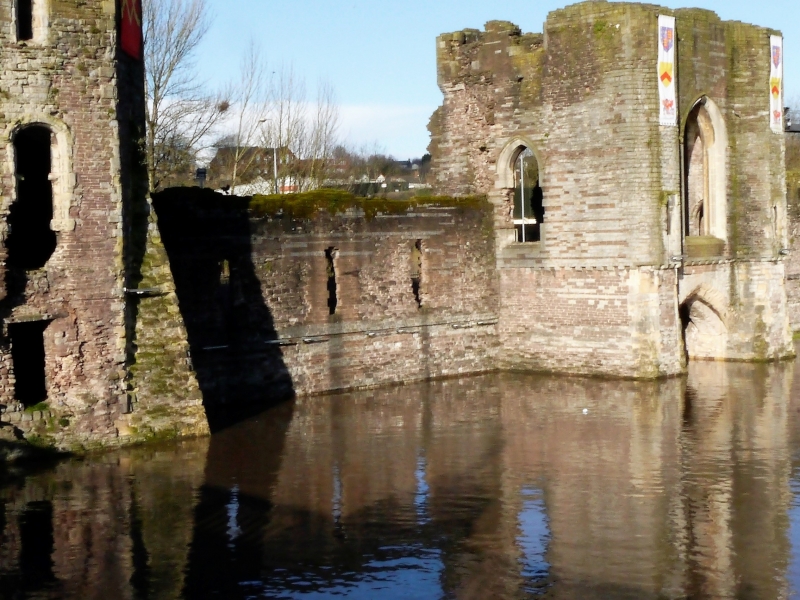 Newport was chief town of the lordship of Wentloog, which had been within the lordship of Glamorgan until 1314. The castle was built between 1327 and 1368 by Hugh d’Audele or his son-in-law Ralph, Earl of Stafford, replacing earlier motte-and-bailey castle on Stow Hill, near St Woolos’ church. The castle may never have been completed on the town side. In C15 (1436-47), the castle was improved for Humphrey Stafford, First Duke of Buckingham. After execution of Third Duke (1521), the castle went into decline, and the town gradually encroached. Late C19 photos show a brewery incorporated into ruins. The castle is now pressed between the river, the railway, and modern road system.

Red sandstone with pale grey banding and dressings. The main surviving section is the three towers aligned N-S, along the river. The N tower, 2-storeys, semi octagonal, with (to S)adjacent remains of hall with windows to E, fireplace between; adjacent window to ante-room. Great central tower with water gate, ribbed vaulting with floral bosses, octagonal turret in NW angle. To S of central tower, narrow room (from C15 alterations), with adjacent wall-gallery with small windows. South tower (once of 2 storeys but raised by Humphrey Stafford) contained lord’s apartments; fireplaces, corbels remain in situ.

Graded II* for surviving medieval structure, with St Woolos virtually the only survivor from Newport's medieval past.