The Horse and Jockey P H 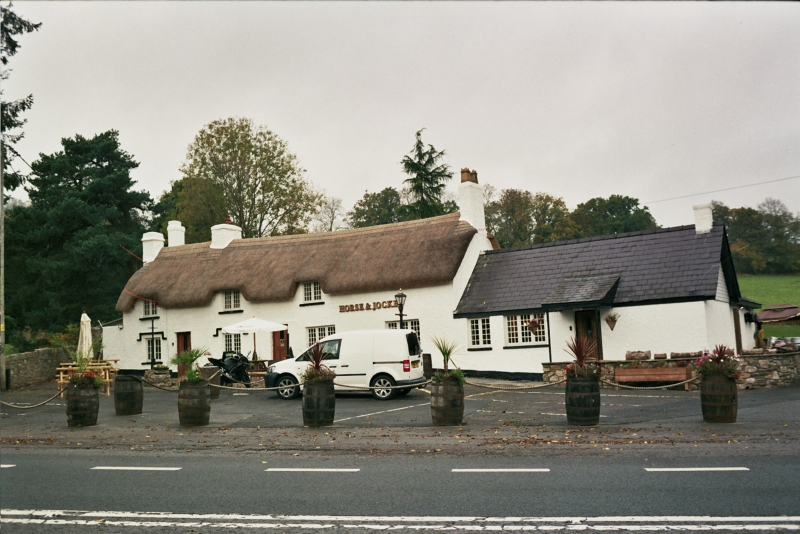 Location: About 250m west of the junction with the A4042 on the north side of New Inn and about 50 m east of the Church of St. Michael and All Angels.

This is a later C17 house whch was perhaps built as the vicarage to the adjoining Church of St Michael and All Angels. It seems to have been given an upgrading by the Pontypool Park estate, as it was given the characteristic dripmoulds over two of the windows in the 1840's, but it was already the Horse and Jockey Inn when purchased for the estate by Capel Hanbury Leigh in the early C19. It seems unlikely to have been built as a farmhouse as there is an earlier one in Court Farm (qv.) almost immediately to the east. The house was given a rear wing in the mid C19 and the interior has been fully converted to open plan public house use in the late C20, including the section to the right which was presumably either a stable or a brew-house in the C19. Its thatched roof is now a great rarity in this area of Wales, although evidence suggests that it was once a common roofing material.

Plastered and painted rubble stone, except for the gable end where the stone is still visible, thatched roof. The later rear wing is random rubble with a Welsh slate roof. A long one-and-a half storey single depth range, except for the left hand end which has the Victorian wing projecting at the rear. The range has a three cell house at the left, and presumably either a stable or brew-house at the right, although this is now incorporated within the body of the public house, and there is a further C20 single storey extension with a slate roof to the right of this. The ground floor of the main range has four windows and two doors. W:D:W:D:W:W. The two left hand windows are two light small paned casements with dripmoulds
the two right hand ones are modern three light casements. The doors are modern plank, the left hand one in the baffle position against the hall stack and probably original, the right hand one a modern insertion. The far right window is in the former outhouse. The upper floor has three small paned casements with the thatch eyebrowed over them. The thatch appears to be combed wheat reed in the West Country style. Three stacks, single flue on the left gable for the parlour, double flue between first two bays for the Hall/Kitchen, and double flue on the right gable which is probably a later addition. Rear wing is two storeys with brick stacks.

The interior of the ground floor has been completely changed with the rooms all opened out into one bar space. The surviving evidence is scanty and the beams etc. all of minor interest. The section to the right, once an outhouse, has a different floor level. The original planning seems likely to have been Parlour, Hall, unheated Dairy, Outhouse, from left to right. Only the ground floor of the main range was inspected at the time of resurvey (November 1996).

Listed as a characterful C17 house which has been added to and altered during its life as a public house, but still has a thatched roof which is now very rare in the area and unique in Torfaen Borough. It also has Group value with the Church of St Michael and All Angels.