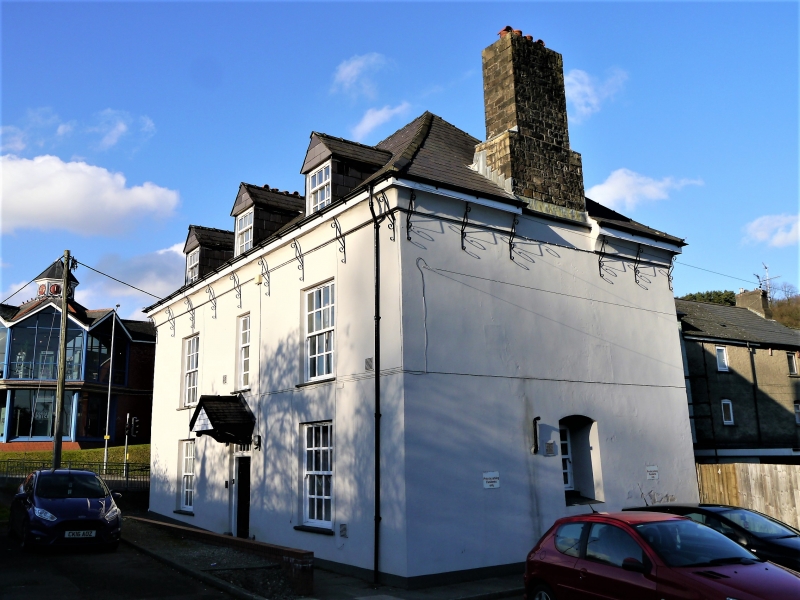 Location: Prominently sited in Pontymoile on the junction of Rockhill Road and the A472.

Probably early C18, but may be later. This is said to have been the Truck House or 'Tommy shop' run by the Monmouthshire Canal Company in the early part of the C19. Said to be the last surviving truck house in the eastern valleys. The truck system (payment by tokens redeemable only at the Company's shop) had been replaced by cash payment by the 1850's. It is also said that this house was the office of the Pontymoile Ironworks when it was in hand to the Pontypool Park estate. It was already the Hanbury Arms Inn in 1852 when the Ironworks were first leased out. There have been alterations to the external features in the late C20.

A semi-detached house of Queen Anne proportions, on a corner site with a later terrace attached to the service wing at the rear. Painted ashlared render, probably over stone rubble, Welsh slate roof with tiled ridge. Double fronted central entrance plan. Two storeys and attic, three windows, sashes with glazing bars, eight over eight panes, the middle one smaller, four over six. All the windows are modern pvc replacements. Central doorway has probably original bracket hood on richly carved consoles. Victorian moulded panel door with rectangular light over. Eaves and gutters on delicate iron brackets, steep hipped roof with three gabled dormers with three over six sashes, and large squared stone end stacks. Left hand return front to street has a further two sash windows with six over nine panes on the first floor and smaller windows below, again all modern pvc. Right return elevation has a window on the ground floor in the stack, otherwise blind. Rear elevation has four more pvc windows of different sizes, another dormer and two roof-lights. No 64 appears to be in the same ownership and must once have been the service wing of 62, but is now included in the terrace 64-72 (even) Rockhill Road (qv.).

Interior not inspected at time of resurvey (October 1996).

This house is a rare survival of a formal early C18 house on the edge of Pontypool, with historic interest for its possible later use as the Truck House for the local Canal Company.