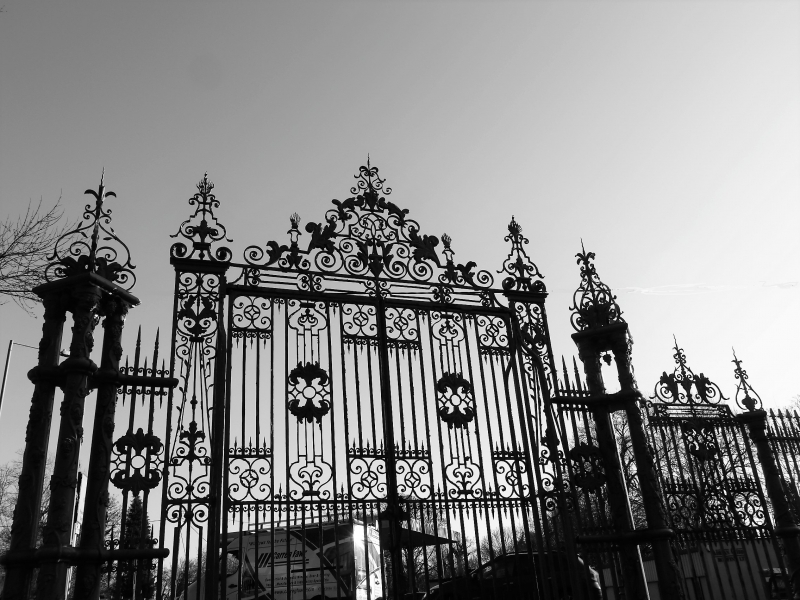 Location: The entrance on to the main drive from Pontymoel at the very south east extremity of Pontypool Park, at a bend in the road.

These gates are said to have been given to Major John Hanbury of Pontypool Park (1664-1734) by his friend Sarah, Duchess of Marlborough (1660-1744). This would date the gift between 1722-1734, but not necessarily the date of manufacture. The maker is unknown. They were erected at their present site, and with their present additions, at some time in the early/mid C19, possibly 1835 by Thomas Deakin, probably for Capel Hanbury Leigh. The additional ironwork was manufactured at the Blaenavon Ironworks. Claims that the gates given by the Duchess now form a part of the War Memorial in Hanbury Road, Pontypool (qv.) appear unfounded. Hanbury was executor of the first Duke of Marlborough''s will and these gates are supposed to be a gift fom the grateful widow. They stood in the arch between the Pontypool Park house and the stable block (now St Alban''s School and the Valley Inheritance museum, qv. Park Road, Pontymoile) until reused here.

A very fine and elaborate pair of early C18 wrought iron gates re-erected in an early/mid C19 cast and wrought iron frame of additional gates and piers. The gates are tall and handsome with panel piers, elaborate overthrow and much beaten and applied decoration of foliage and armorial type. All this is in the style of ironwork first popularised by Jean Tijou at Hampton Court and later taken up by William Bakewell of Derby, William Edney of Bristol and many other masters. These gates are framed by clustered cast iron piers decorated with applied vines and leaves and crowned with finials inspired by the earlier work. There are good quality foot gates on either side and then additional lower single piers with vine leaves. Further ironwork of lesser quality in the form of a spear fence on dwarf stone wall completes the whole.