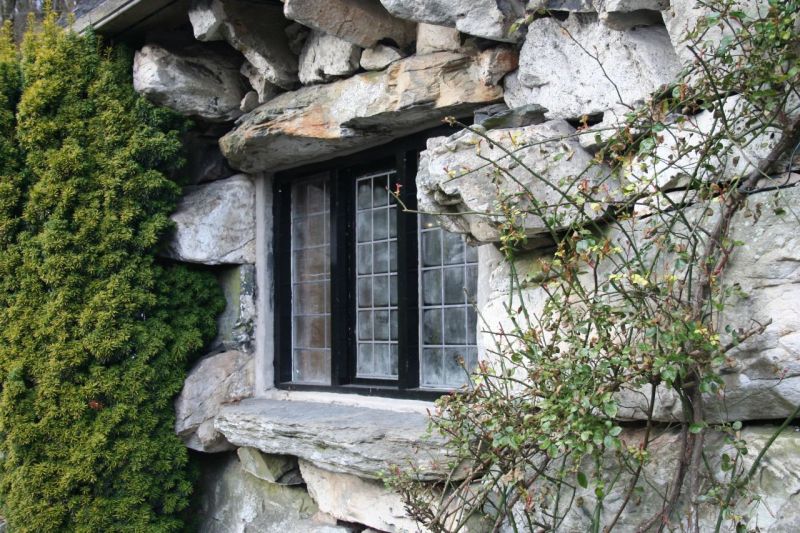 Location: Sited slightly above the road on a bend opposite the Pont Ty-Hyll, at the eastern boundary of the community.

The `Ugly House' has been the focus of various myths and legends since it began to achieve tourist popularity in the C19. Traditionally held to be a `Ty un nos' (i.e a house constructed overnight on common land), and dated with amusing improbability to c1475, it seems most likely that the emergence of its `history' occurred not long after its construction and was part of an invented package. As such it represents an interesting example of Romantic myth-making designed to satisfy the burgeoning tourist trade in North Wales during the C19 (a parallel for this is the equally invented story of Gelert, the faithful hound at the eponymous village in Snowdonia). In its cyclopean, dry-wall construction, its curious conical chimney form and pronounced corbelling, it owes little to the local vernacular tradition and looks instead for its inspiration to the Cottages Ornees of the Picturesque movement. The house clearly exerted an influence locally, since the majority of the Gwydir estate cottages, erected from the late1830s to c1850 show a strong stylistic dependance. It is most probable that the Ugly House was built at the time of (or as a response to) Telford's new road and the Ty Hyll bridge. The latter was constructed between 1819 and 1821; interestingly the house is not recorded in the Great Census of 1841. Since 1988 it has been the office of the Snowdonia National Park Society, who have recently carried out extensive repairs.

Included for its special architectural interest as an early C19 Picturesque cottage and for the historical interest of its early association with tourism in North Wales.