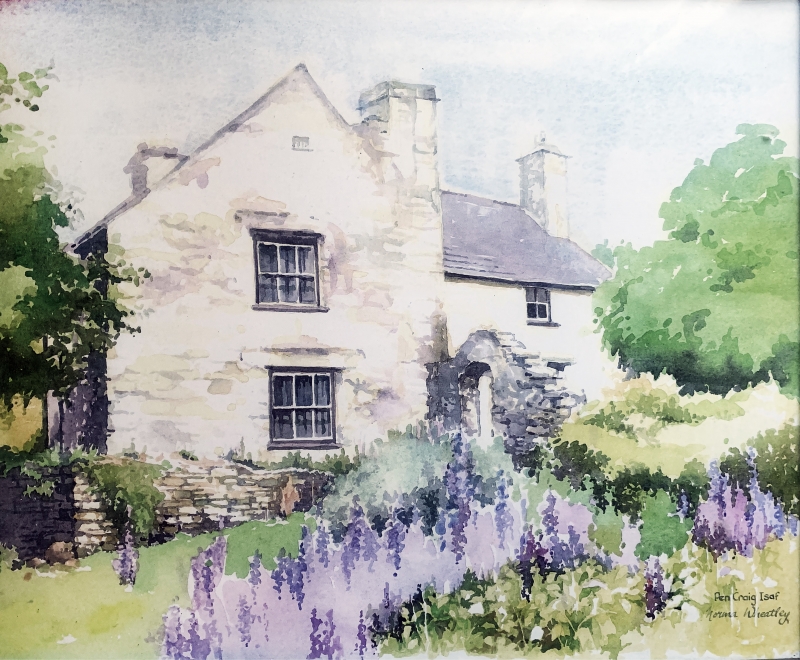 Location: Elevated site facing east, within the Gwydyr Forest and at the boundary of the Communities of Betws y Coed and Capel Curig. Set in the slope and reached by mountain road west from Betws y Coed, on the

Sub-medieval small gentry farmhouse built in two phases and then remodelled and enlarged in earlier C19. The uphill part is the earlier, with early C17 origins.

L-plan, 2-storey, whitewashed rubble farmhouse with slate roofs and stone chimney stacks; partly on boulder foundations. At the front, the 2-window uphill half to the right has horned sash windows (that to the ground floor has a dripstone and is a good modern replacement). The main entrance is to the angle with boarded door; tall chimney to R gable end which has ramped buttress. Slate-stone seat beside door. Projecting forward at downhill end is the 1-window gable end of the late C17/early C18 cross range with corner chimney stack; 6-pane sashes (again modern replacements) to both floors and similar glazing to the 2-window south side which includes a further entrance. At the rear the cross range gable end is partly whitewashed and has one deeply recessed window with slate lintel and dripstone; see also projecting masonry at the corner (this part of the interior was not accessible to give a clue to possible changes here). The uphill part has deep catslide lean-to and set back to centre is a small stair window.

Interior not inspected during the resurvey (August 1996). The following description is based upon the original inspection in August 1993.

Entrance is onto a lobby with the main staircase behind being reached from the cross range to the left. The earlier part of the farmhouse to the right has the kitchen with ogee stop-chamfered beams and joists and part of the main cross beam has a slot indicating a former screen partition. The fireplace has been modernised but to the side of this, beyond a boarded door, is a broad winding timber staircase. The thickness of the wall here indicates that the lean-to is an addition (?C19). The cross range has been given late-Georgian detailing in C19 including egg and dart cornices, boxed beams, panelled reveals and panelled doors; one of the main ground floor rooms retains a bracketed chimneypiece and panelled cupboard but the other has been converted into a washroom. The main staircase to rear has moulded handrail over a Chinese Chippendale derived balustrade. On the 1st floor some good, but possibly reused, early C17 wainscotting is retained to the room over the kitchen with deeply roll-moulded muntins and guilloche ornamented transoms (a pattern that is only found in this area of Wales) - partly obscured by modern ceiling. The landing has two panel-fronted cupboards (?C17) and one bedroom has a splayed corner because of the chimney. The remaining 1st floor room in uphill part and rear ground floor room in cross range were inaccessible at the time of primary inspection (August 1993).

Listed for the special interest of its sub-Medieval origins and surviving interior detail.