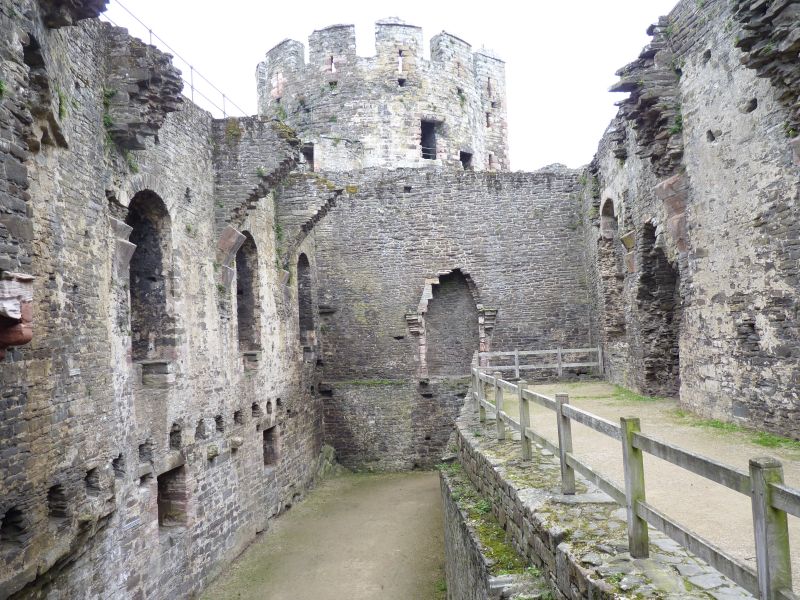 Location: On the E side of the town overlooking the Conwy estuary.

Conwy Castle was begun in 1283 following the successful conquest of Snowdonia by the armies of Edward I of England. It was one of a defensive ring of castles erected around the North Wales coast from Aberystwyth to Flint, and in addition protected a walled town that was the largest of the medieval boroughs of North Wales. Work began with digging the rock-cut ditches, under the direction of Richard of Chester, master engineer. The design of the castle and supervision of building was under the control of James of St George, Master of the King's Works in Wales and the foremost secular architect of his age. Other subordinate master craftsmen included Henry of Oxford and Laurence of Canterbury, both master carpenters, and John Francis who, like James of St George, was from Savoy. The castle and town wall were substantially complete by 1287.
Modifications were made to the buildings in 1346-7 by Henry de Snelleston, mason to Edward, Prince of Wales (the Black Prince). This included replacing original roof trusses and strengthening the roofs by adding masonry arches. By the end of the C15 its military importance was diminishing and the castle slowly decayed. It was described as in poor condition in 1627, and in 1631 it was sold to Charles I's secretary of state, who assumed the title Viscount Conway of Conway Castle. During the Civil War the castle was repaired and fortified for the Royalists under the leadership of John Williams, exiled archbishop of York and a native of Conwy. The castle surrendered in 1646 and in 1655 the castle was 'disabled' by blowing up a portion of the bakehouse tower, making a substantial breach. The castle was restored to the Conway family after the Restoration, when some of the buildings, and the lead roofs, were taken down. Ownership passed to the Seymour family until, in 1865, it was given to the town. During this period there was some restoration and the bakehouse tower was rebuilt by the LNWR, whose railway line passed the foot of the castle. Since 1953, when more substantial conservation work began, the castle has been a guardianship monument in the care of the state.

Listed grade I as one of the oustanding Edwardian medieval castles of Wales.
Scheduled Ancient Monument CN004