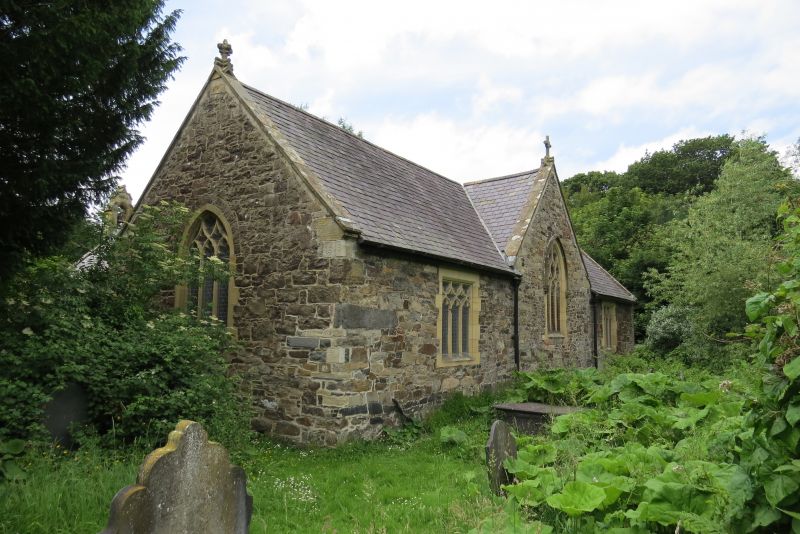 Location: In a walled churchyard near the main road junction in the village, and immediately S of Afon Gyffin.

A church of at least C13 origin. The nave is substantially medieval fabric, the S chapel C16. The chancel retains a late medieval roof but the E wall of the chancel and the N chapel were built in 1858 when the church was extensively restored. Windows in the earlier parts of the building were also replaced at this time, giving the church a C19 external character.

A simple Gothic style church comprising nave, lower chancel with N and S chapels, and N vestry. Of grey rubble stone with freestone light-brown dressings, and slate roof behind coped gables. The W bellcote has a single bell in a pointed opening beneath a stepped gable. The S porch is partly open on the E side with diamond wooden mullions. The arched entrance is timber-framed with collar beam and has iron gates. The nave has two 3-light square-headed windows on the R of the porch and a single-light window to its L. Buttress at the E end. Decorated W window of 3-lights with hood mould and head stops. On the N side of the nave is a central near full-height vertical joint indicating a break in the building. It has a 3-light square-headed window on the R side incorporating Decorated tracery.
The S and N chapels have tooled quoins and their E walls are aligned with the chancel E wall, forming an unusual T-shaped plan. The S chapel has a W segmental-headed doorway, in the angle with the chancel, which has a boarded door and strap hinges. The S window is 3-light Decorated and the E wall has a 3-light square-headed window incorporating Decorated tracery. The chancel has a 3-light window with reticulated tracery and hood mould with head stops. The N chapel has a 3-light square-headed E window with ogee lights. The lean-to N vestry has a reduced stone stack and N window in a dressed surround.

The porch has slate benches. The S doorway has a continuous chamfer, with late medieval ribbed door and strap hinges. The inner side of the door is strengthened with diamond lattice braces. The principal interior features are in the chancel. The chancel has a late medieval boarded wagon roof, once forming a companion of honour to the sanctuary. It has painted figures of Evangelists and saints, on a cornice incorporating large male heads, 2 surviving on the S side and 1 on the N side. A late medieval parclose screen to the S chapel has a reed-moulded post-and-panel dado, below open lights with delicate tracery, and 2-tier cornice. A doorway, with gabled head and delicate tracery patterns, is set back from the W end. The opening to the N chapel has a post-Reformation screen of 3 bays, narrower in the centre, with simple brackets supporting the chancel roof. It has plywood arches inserted.
Other details are mainly C19. The interior is plastered and painted white. The nave has a roof of closely spaced arched braces. The chancel arch is on foliage corbels and has a single order of chamfer. Chapels have 2-bay arched-brace roofs.
The font, probably C13 or C14, has a round bowl with low-relief foliage frieze and is lead lined. It stands on a later pedestal of 4 clustered shafts and a square base and plinth. Simple pews have moulded ends. The pulpit has fielded panels, as do the choir stalls. The C17 communion rail has turned balusters. Against the E wall of the chancel are re-set grave slabs, to David Lloyd (d 1691) and Katherine Lloyd (d 1710). In the chancel S wall a slate tablet with pilasters commemorates Brigadier-General F.M. Edwards (d 1929). In the N wall of the nave is a brass plaque to Thomas Ellis (d 1898) and slate tablet to John Prichard (d 1756).
The E window shows Christ as the Good Shepherd, flanked by figures of SS Peter and Paul, post 1858. One nave S window is by Jones & Willis, showing crucifixion and resurrection, 1922.