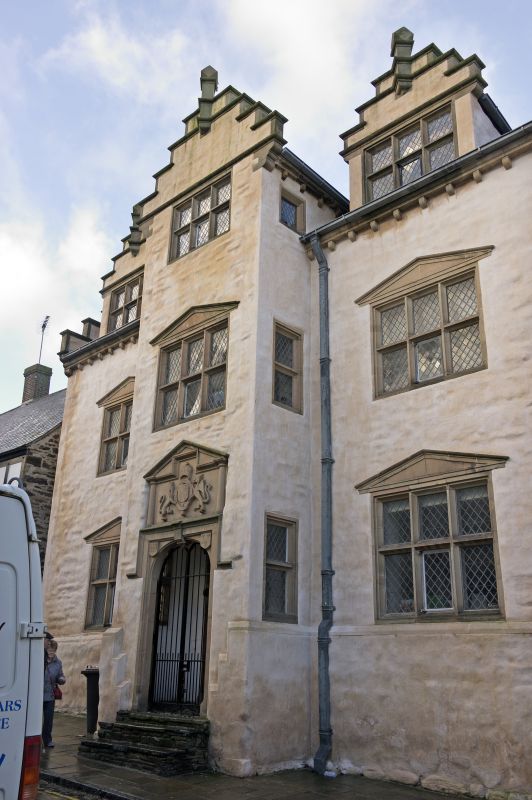 Location: On the corner of High Street and Crown Lane

Plas Mawr was built in stages between 1576 and c1585. Robert Wynn had acquired a 'mansion house' from Hugh Merche in 1570, and in the 1st phase, dated 1576-77, added a wing to the existing house which is now the N wing of the main house. The old 'mansion house' was subsequently demolished and in 1580 an entrance range and S wing were added in its place that, with the N wing of 1576-77, formed a U-shaped house facing Crown Lane and enclosing a rear courtyard. Finally, in 1585 Wynn obtained the plot on the corner of High Street and Crown Lane. This allowed him to build a separate gatehouse facing High Street, which now became the main entrance to Plas Mawr, superseding the original entrance in the relatively narrow Crown Lane. A lower courtyard is between gatehouse and main house. The house and gatehouse are among the earliest examples of the fashion for crow-stepped gables. The main house was lavishly decorated with plasterwork, a relatively recent innovation in Wales, by a team of plasterers who also worked at Plas Maenan and Gwydir Castle in the Conwy valley.
The house remained in the family in the C17 until after 1683 when Elin Wynn married Robert Wynne of Bodysgallen, and thereafter Plas Mawr was only a minor family house. Ownership later passed by marriage to teh mostyn family. Subsequent use of the building made surprisingly little impact on its original interiors. In the C18 part of the gatehouse was used as a courthouse, and the main house was subdivided into tenements. Between 1839 and 1886 part of the S wing was occupied by a school. The Royal Cambrian Academy of Art took the building as their headquarters in 1887, and used it as a gallery. In 1993 Plas Mawr was placed in the guardianship of the state,and has since undergone substantial restoration.

The interior is remarkably well preserved, and the original layout of the building can be reconstructed with confidence. The main house has an entrance passage leading to an axial corridor at the rear. In the ground floor the entrance range has a kitchen and pantry, the S wing a servants' hall and buttery, and the earlier N wing a parlour (in an awkward position after the extensions of 1580) and brewhouse. In the 1st floor the great chamber occupies the main range, Robert and Dorothy Wynn's private rooms the N wing, guest rooms the S wing, with servants' sleeping quarters in the attic. Both turrets have renewed wooden newel stairs. Many features are consistent throughout the interior. These include gabled wooden door frames and post-and-panel partitions.
Main rooms are decorated with plaster, although the plasterwork of 1577 in the N wing is of a different character to the 1580 plasterwork in main range and S wing. The moulded cornices of the 1580 section of the house incorporates a frieze of ferns, and survive in the hall, great chamber and in the 1st floor of the S wing where the plaster ceilings have not survived. The most richly decorated rooms of the 1580 section of the house are the hall and great chamber, where the plasterwork has been repainted. In the great chamber is a lateral fireplace with marble chimney piece incorporating a corbelled lintel, and plaster overmantel with the garter arms and monogram of Elizabeth I. Around the room is a frieze of cartoon-like caryatids below the cornice. The ribbed ceiling incorporates geometrical patterns, including ribs radiating from roundels that incorporate heraldic devices and one with 'RW 1580'. A doorway from the great chamber to S stair has an C18 panel door in an enriched door frame.

Listed grade I as the most complete large Elizabethan town house in Wales, exceptional for its state of preservation and with interior plasterwork of national importance.
Scheduled Ancient Monument CN083