A Grade I Listed Building in Clynnog, Gwynedd 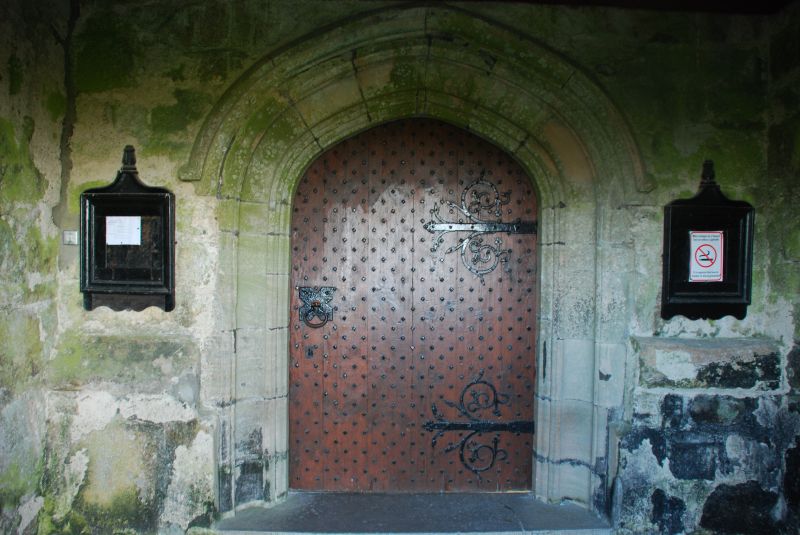 Location: The parish church is set close to the main Caernarfon to Pwllheli road, in a large graveyard which slopes gently to the N. The chapel stands on the S side of the tower.

The portionary and parish church of Clynnog-fawr is dedicated to St Beuno, the C6 abbot and saint, cousin of St Kentigern and scion of the Morgannwg royal house. Clynnog was the centre of a thriving cult which spread beyond his birthplace in E Powys to the west of Wales, becoming particularly strong in the C12. There are 10 parish dedications to him in Wales. He is said to have founded the community at Clynnog c616 AD and died, probably here c640-2 AD. The church became one of the two great clas communities of Arfon, and derived particular significance and wealth from being on the main pilgrimage route to Bardsey. The eastern crossing of the present building was erected in c1480-1486, the nave extended to the W some 20 years later, apparently part of a separate building programme, and the W tower and a 2-storey vestry added in the early C16, perhaps initiated by Dr William Glynne, Chancellor and Archdeacon of the Diocese of Bangor. The church has been restored at various times, 1848-56, 1913, 1924, 1926-8 and 1940. The chapel of St Beuno was rebuilt c1500-10 perhaps like the church itself, an initiative of Bishop Skevington of Bangor (who had also carried out works to Bangor Cathedral), doubling the size of an earlier chapel on the same site, as an independent shrine chapel. It was linked to the church by a vaulted passage of Irish vernacular style in the early C17. In 1653 the puritan Ellis Rowland was transferred to Clynnog and established a long lasting dissenting tradition. In the early C18 Richard Nanney became vicar and fervently established an evangelical ministry and enthusiastically supported the Griffith Jones school movement. The chapel was used as a schoolroom from the late C18, and is where Eben Fardd spent the years 1827-1849 as the village schoolmaster.

Built of large scale local roughly coursed gritstone rubble, with squared rubble as quoins, sandstone dressings and lead roofs concealed behind crenellated parapets. Chancel, N and S transepts with a N porch, and W tower, to which the chapel is linked by a covered way. A two-storey vestry was attached c1500 to the N side of the chancel. The walls have a hollow-moulded plinth and continuous sill string. Perpendicular windows to both nave and chancel, with sharply pointed heads and cusped panel tracery, the alternate lights ogee-headed, all with casement moulded jambs. At the E end, a huge 7-light window; 5-light gable windows to the transepts. A door in the N transept has a 4-centred head. The two-storey porch has a moulded outer open arch, the jambs splayed internally, and 2 chambers above lit from small 2-light windows, and an external door at first floor level on its E side. The inner door to the nave is moulded as the outer. The W door of the tower is deeply set and square headed; shields with quatrefoils in the spandrels. The label drops terminate in mitred heads. Three-light window over, also deeply set in casement mouldings and with a hood moulding. The tower has 2 upper stages, the top stage with 3-light bell openings with slate louvres on 3 sides. The crenellated parapets throughout, rebuilt during the restorations when the gargoyles were removed, have crocketed square pinnacles at the corners. The vestry, added to the N side of the chancel, is of 3 storeys, with an external stone stair on the W. A polygonal stair in the SE angle of the S transept provides access to the roofs. The tower has slate louvres to the bell openings and a cast lead roof covering.

The chapel of St Beuno lies S of the W tower, and angled slightly to the S of the axis of the church. Built of the same materials, but roofed with copper sheet. It is of 4 undifferentiated bays, with a moulded plinth and low wall string, and a further string at the base of the low-pitched crenellated gables. Large 5-light E window with sub-arcuate panel tracery, and similar 3-light side windows with supertransoms lighting the E end. Leaded glazing throughout. The W door has moulded jambs and head, set in a square opening interrupting the wall string, and has a label moulding with crouching beast terminals, and quatrefoil and mouchette spandrels. Small 2-light trefoil headed window at high level. Crocketed pinnacles on the square corner merlons. Lead downpipes and hoppers. The linking vaulted pentice has 1 narrow square-headed lancet placed centrally at each side, and an offset course at the springing of the vault.

The interior of the church is grandly spacious, with whitewashed walls and clear of fixed furniture. A later C15 roof of alternate hammer-beam trusses and moulded intermediate principal tie beams supporting the low-pitched roof supported by moulded purlins and ridge piece, with the intersection bosses carved with leaf and rosette motifs. The wall posts below the ties stand on stone corbels. Wide arches to the crossing, with triple roll imposts separated by hollow mouldings, rising to small circular capitals and the arch over with a bracket-moulded order. The crossing is stone paved, carried into the transepts. Six C16-C17 trusses in Gothic style infilled with tracery above the tie beams, the end trusses arched over the heads of the transept windows. Two steps lead into the chancel, passing through a rood screen of 1531, much restored in 1940. The short chancel is of 2 roof bays, with further steps to the high altar. Whitewashed walls and stone paving. On the S side, a small arched piscina and triple sedilia with crocketed canopies. The tower has a transverse oak bellframe with 3 bells. The tower roof contains some reused moulded timbers.

Fittings: the chancel screen of 1531 has 3 bays either side of central doors. Bar-stop chamfered sill and moulded posts supporting the roof loft, mostly of 1940, with excellently carved bands of undercut oak swaying scrolls based on original evidence. The tower screen is a robust post and panel partition with the upper register of turned balusters. Three-plank studded door with a curved head. Font: diminutive panelled step carrying a modern octagonal bowl of oak. Organ: the gift of the Glynne family of Glynllifon, 1932, originally hand blown, with an end console. Pulpit: c1700, octagonal and panelled, a scrolled beast on the top panel. In the chancel, fine choir stalls of c1500, 4 each side returning as 3 backing on to the rood screen. Small arms with carved head terminations and misericords supported on traceried brackets with leaf supporters. The book desks have linenfold panelled fronts between moulded muntins, poppy-head terminals, and facing into the axial passage, the Glynne double-headed eagle crests.

Monuments: in the chancel (a) Chest tomb in the NE corner. Shallow carved sides and capstone, carrying armorial bearings of William Glyn de Lleiar, knight, d.1609, the side panelling with quartered arms superimposed. Above, (b) William (Glynne de Lleuar) d.1609, kneeling in front of a reading desk, 7 children behind, set in a corniced panel, inscription between supporting consoles, and arms on a cartouche over; (c) White figured marble panel with pilasters supporting a broken cornice, putto on apron, to George Twistleton of Llyaer (m to the heir of William Glynne of Lleiar), d.1714, his sister added; (d) Black marble tablet by Spence of Liverpool, with white panel with cornice and acroteria, to the Rev Hugh Williams, vicar, d.1833. On the S wall (e) a black marble tablet with white marble inscribed panel and cornice, to Rev John Williams, d.1809. In the N transept, (f g) two tablets of white marble on black slate, to John Williams, d.1877; (h) Soloman Williams, d.1848 a Methodist. Also various brasses of the Williams family of Brynaerau, and a Lleuar brass to William Glynne of Lleuar, d.1633 in a still medieval style. At the NW end of the transept (i) a ledger raised on square balusters, to George Twistleton of Lleuar, d.1667, carved with inscription and arms, another slightly raised ledger before it (j) to Rev Philip Twistleton BA, d.1700 with his sister, and (k) a further ledger slab on the floor under to a later William Glynne, d.1660, with his arms and inscription. In the S transept, set low on the wall, (l and m) 2 tablets to Elizabeth Williams of Nantcall, d.1760 and Thomas Williams, also of Nantcall, d.1794.

Furniture: in a glass case, Cyff Beuno, the hollowed trunk chest of St Beuno, bound in iron in the C17 and provided with two locks. It was originally located at the E end of the chapel.

The Chapel of St Beuno is approached by an external passage from the tower, which was at one time used as the village lock-up. The plain walls corbel inwards to support the large slab ceiling, above which the vault is corbelled. Stone lintels at each end, and one small window each side. The chapel is of 4 roof bays, the trusses carried on wall posts on corbels. The walls are whitewashed and the floor stone paved. One step only differentiates the E end. A vice stair in the NW corner provides access to the roof. On the S wall at the E end a trefoil headed piscina, with an aumbrey in the E wall. Set in the floor the 'Maen Beuno' a boulder inscribed with a simple cross of C7-C9 date, found at Glan Beuno y Bont Newydd, where it had served as a boundary marker. The tomb of St Beuno was here until moved in 1793.

Included at Grade I as one of the outstanding late medieval churches of Wales, with its associated cult chapel. A building of highly sophisticated design, associated with high ecclesiastical patronage and wealth on account of it being the centre for a major pilgrimage route through N Wales.