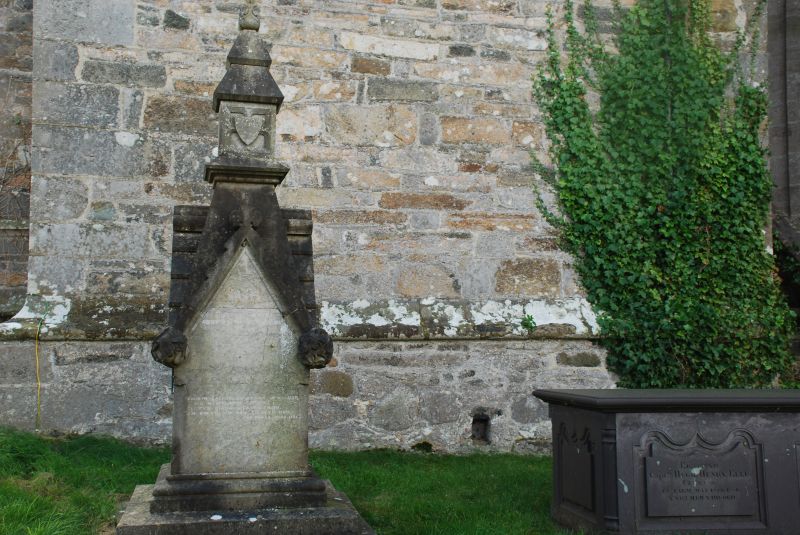 Location: The tomb is set in the churchyard on the NE side of the church, close to the gable of the N vestry.

Ebenezer Thomas, Eben Fardd, 1802-1883 was the local schoolmaster and later a grocer, a well-known romantic poet, critic and writer. Regarded in his day as one of Wales' foremost poets, he came to prominence in the Welshpool Eisteddfod in 1824. He moved to Clynnog in 1827, where he lived opposite the church in a house now called Bod Cybi. He died on the 17th February 1883.

A graveyard monument in a Gothic style consisting of a square stone die raised on two low steps, having chamfered edges and gabled each side as roofs with fleur gables, and lower terminals carved as balls of leaves. The die rises behind the gables as a 4-sided pyramid carrying a square terminal feature with offset capstones. Inscribed on the N side ER GOF AM EBENEZER THOMAS EBEN FARDD, Awst 1802 - Chwefror 17 1883, and further inscriptions, including a gold enlivened poem by Tom Bowen Jones of 1854. A slate plaque has been added to the E side.

Included as a monument to the notable bard Eben Fardd, a pre-eminent figure in C19 Welsh literature. The tomb is a robust and ingenious exercise in a late Victorian Gothic style.