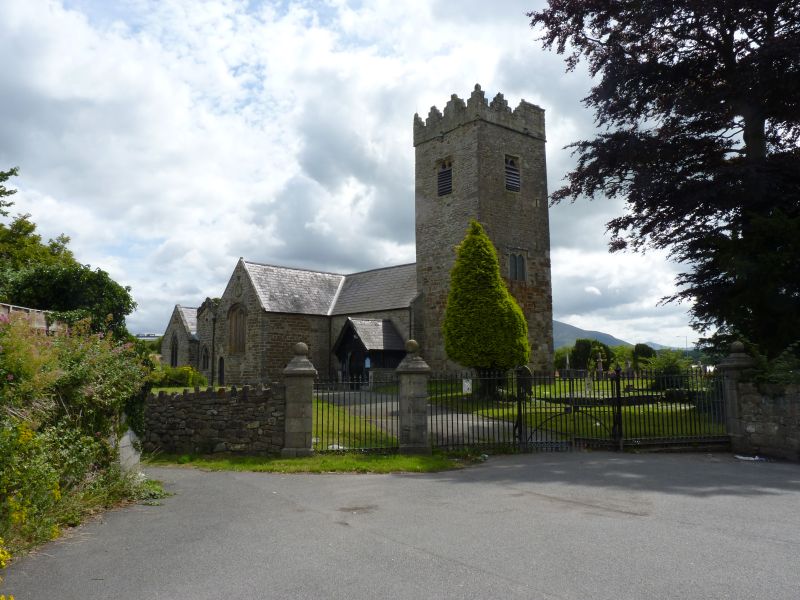 Location: In a walled churchyard set back from the road and to the S of Segontium Roman Fort.

Close to Segontium Roman Fort and built on the site of a Roman mithraeum. A Roman altar was found in the S wall of the church during C19 restoration. The dedication to St Peblig, said to be the son of Macsen Wledig, is evidence that this was an important early Christian site. The church was given to Aberconway Abbey in the C13 by Llewelyn ap Gruffydd, but the present fabric is of the C14 or later. The W tower was probably begun in the late C14 but was not completed until the C16, perhaps after the Reformation. The NE chapel was built in 1593. Subsequent alterations were minor, but included the extension of the N transept in 1775 and building a vestry in 1822 between the N transept and the NE Chapel. Restoration occurred in 1839 and more substantially in 1894 when the crossing and tower arches were rebuilt, the present porch was added and the seating was replaced.

A mainly late Perpendicular church although incorporating much C14 fabric, of cruciform plan with W tower, and NE vestry and chapel, also known as the Vaynol Chapel. Of coursed rubble walls and slate roofs behind coped gables.

The 3-stage W tower is built in 2 phases distinguishable by a change in the masonry. The lower stage of the late C14 or early C15 has a narrow W window in a chamfered surround, while on the S side is a similar window with a narrower slit to the L lighting the stair. In the middle stage is a C16 2-light W window with sunk spandrels to a square head with hood mould. Small narrow stair lights are to the R. In the upper stage each face has a 2-light square-headed window with sunk spandrels, and with hood mould retained to the N face, while in front of the mullions are slate louvres. The tall parapet has stepped battlements.

The nave has coped gables on moulded kneelers, the NW of which is carved with a primitive head. The NW porch of 1894 is timber-framed on a dwarf wall of snecked stone. The gable projects on brackets with cusped barge boards. The double pointed doors are boarded with strap hinges. In the N transept is a hooded 4-light 4-centred N window beneath a blind pointed trefoil with finial. On its L side is a round-headed doorway with boarded door and strap hinges. The adjoining lower vestry has an embattled gable parapet and a 2-light geometrical window with hood mould, above which is a small cusped opening. The NE chapel is lower again and projects in front of the vestry and transept, but set slightly back from the E end of the chancel. In its W wall is a cast iron rainwater head dated 1814. The N wall has a 2-light window with post-medieval Gothic tracery and hood mould with head stops. The E window, of 1593, is 4 round-headed lights with sunk spandrels, and square hood mould.

The chancel has an embattled parapet. The E window is 3-light Perpendicular of the late C19. In the chancel S wall is a 3-light window on the E side, to the L of which is a smaller 2-light Decorated window with hood mould partly obscured by a later rubble stone projection housing a boiler. The S transept has diagonal buttresses. Its 5-light late C15 Perpendicular S window is beneath a pointed trefoil with finial. In the nave is a 2-light C16 SE window with cusped ogee-headed lights, L of which is a window in similar style inserted in 1839.

The porch has a 2-bay arched-brace roof with a single tier of windbraces, of reused materials. The N doorway has a continuous hollow moulding and double doors with iron studs.

The interior has a short nave and a broad crossing which structurally is integrated with the N transept. Walls have exposed coursed stone faces. The nave has a late medieval 4-bay arched-brace roof with 2 tiers of windbraces, and a small bullseye window over the crossing arch. The tower arch has a continuous hollow moulding to a 2-centred arch. Above it are 3 stepped cusped lights under a segmental arch, and with sill band. Two small stoups are in the N wall. The 4-centred crossing arch is inscribed with date 1894. The crossing and N transept have a late medieval arched-brace roof similar to the nave, with windbraces and boarding behind, of which 4 bays are late medieval and the 2 narrower bays at the N end were added in 1775. The S transept has a late C19 roof of closely-spaced arched braces. All the roofs have wooden cornices. The chancel arch, also of 1894, has hollow-moulded polygonal responds, moulded capitals and a 4-centred arch. On its L side is an arch behind the pulpit with an inner order of cusping and outer order of shafts. The chancel has a shallow-pitched 3-bay king-post roof with corbelled brackets and a cornice with quatrefoil frieze. On the N side of the chancel is a 4-centred arch to the vestry (now housing the organ), to the E of which is another but wider 4-centred arch to the NE chapel. The chapel retains its original 2-bay arched-brace roof with cusped windbraces. The tower has a newel stair.

The chancel has a late C19 stone reredos, and a C14 trefoiled piscina. Another slightly later piscina, with cusped ogee head and corbelled basin enriched with relief foliage, is in the S transept. In the S wall of the S transept is a C14 cusped tomb recess under a crocketed ogee hood and flanking attached pinnacles.

The plain octagonal font on a pedestal is C15. The corbelled polygonal wooden pulpit has Gothic panelling and is late C19. Across the chancel arch are wrought iron double gates with flanking railings on a stone dado, enriched with scrollwork. Choir stalls have open arcading to the front, and rounded backs to the back row.

The NE chapel has a large alabaster tomb of William Gruffydd (d 1587) and his wife Margaret (d 1593), daughter of John Wyne ap Meredydd. They lie in contemporary dress on a large tomb chest with weepers to the sides between fluted pilasters enriched by coats of arms in relief, and with an inscription around the rim. In the reveal of the E window, against which the tomb is placed, is an heraldic alabaster tablet in relief with the date 1593. The vestry has, above the E doorway into the NE chapel, a small child's effigy built into the wall in a dressed surround that was probably re-used from a window. In the nave are 2 medieval grave slabs built into the S wall. The transepts have numerous C18 wall tablets, while the chancel has brass memorial tablets.

Several windows have late C19 or early C20 glass. The E window is by Mayer & Co of Munich, probably from their London workshop, and portrays Christ with the Apostles. In the chancel SE window is the miracle of loaves and fishes, by John Hall & Son of 1912. The chancel SW window is unsigned and has no clear subject matter, but shows, in late-medieval style, the sacrifice of a lamb, harvesting grapes, pouring wine and the death of a priest. In the S transept the S window depicts 'Come unto me all ye that labour', also by Mayer & Co. The N transept depicts 'suffer little children' by Lavers & Westlake of London, dated 1894. In the nave, the SE window depict SS George and Margaret, and commemorates Morys Wynne Jones, killed in action in 1914. The nave SW window, also unsigned, shows Christ calming the storm at sea.

Listed grade I as a well-preserved substantial medieval church on an important early Christian site, with an imposing exterior including a prominent tower, and an especially fine interior including late-medieval roofs of high quality and a good range of fittings, including a fine late C16 tomb chest in a private chapel.