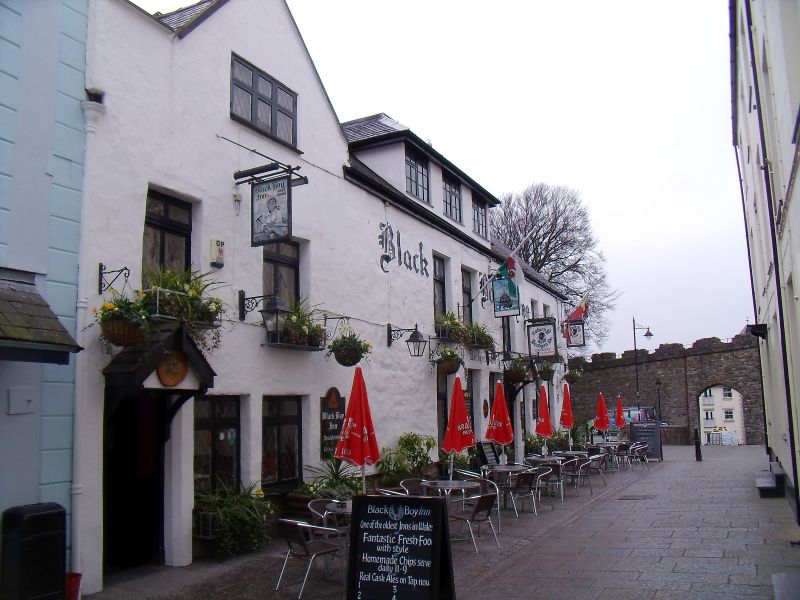 Location: At the N end of the street.

A C17 house built in several phases, all probably of the C17. The first phase was probably the main range and rear wing on the R side. A separate rear wing was also added on the L side, while an additional wing, with its gable end facing the street, was added against the L gable end of the main range. The fenestration was altered in the C19, subsequent to which in the late C19 or early C20 the windows were replaced with leaded lights.

A 2½-storey inn of whitened render over rubble stone, and slate roof hipped at the L end, and brick stacks to the L of centre and R end. The main range is 7-window and to its L is a 2-window gabled wing in line, all with windows renewed in earlier openings. The main range has a central doorway that has a boarded door with false strap hinges, and overlight beneath a bracketed and gabled hood. It is flanked by 3 windows in the lower storey, while in the upper storey are 2 windows each side aligned with the outer lowe-storey windows, and an additional window is above the doorway. A wide hipped roof-dormer L of centre has three 2-light casements. A doorway in the L-hand wing has a gabled slate-covered hood on brackets, and boarded door with false strap hinges. Its attic window has been enlarged.

The rubble-stone rear has 3 gabled wings, of which the R-hand is set back with roughcast wall and the L-hand projecting forward. Windows are enlargements, although the central gable retains 2 wooden lintels in the upper and attic storeys. Set back against the R (N) gable end is a wing added C20.

The main doorway leads into an original through passage. This has a round-headed niche on the R-hand side, beyond which is a C17 round-headed doorway now reduced. The main range has detail of the late C17. In the lower storey are cross-beams with run-out stops. A fireplace in the R-hand room has a timber lintel. A C19 open-well stair with plain balusters and square newels is in the central rear wing. In the middle storey are plainer ceiling beams. The original R-hand rooms in the middle and attic storeys have fireplaces with wooden lintels. Collar-beam roof trusses are retained to the main range and rear wings.

Listed as a rare surviving C17 building in the walled town, retaining early interior detail, and for its contribution to the historic integrity of the walled town.