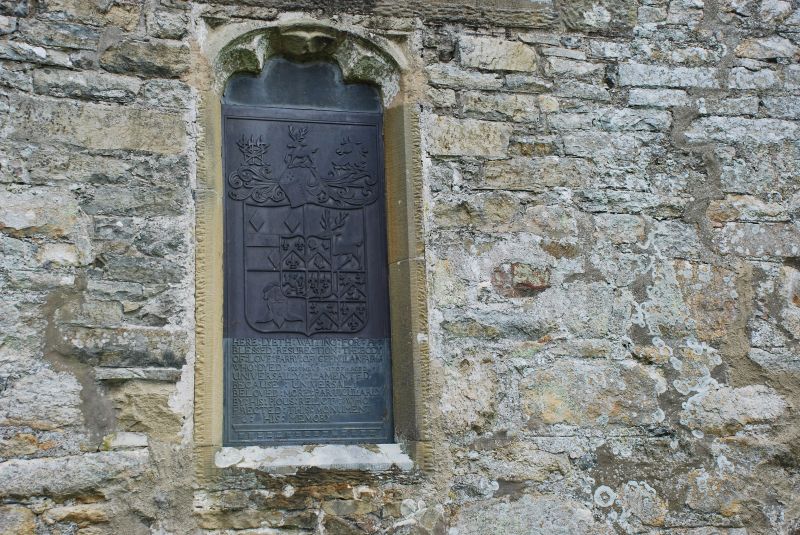 Location: The church is located on the first level ground above the beach, at the lower end of Llanbedrog, and close to the small stream with defines the churchyard on the SE.

The church is dedicated to St Pedrog, a missionary priest from Ireland who evangelised in Wales and Cornwall in the later C6. The church in Llanbedrog probably has C13 origins, the time when it first appears in the list of incumbents in the Norwich Valuation of 1254. The present single cell structure is medieval, extended or rebuilt at the E in the early C16. It benefited from the patronage of the Madryn (Love Parry) family from the C17. Repairs were carried out in 1827 (tablet in tower), and it was restored in 1865. The tower was added in 1895 by Sarah E M Williams-Jones Parry of Madryn in memory of her parents, with a vestry, the latter discreetly rebuilt and extended in 1995.

Built of large uncoursed rubble, and yellow gritstone dressings, flush pointed with lime mortar. Slated roof between raised coped gables. The nave and chancel of continuous but distinct builds. C19 windows with ogee tracery, 1- and 3-light to the nave, 2-light on the S side of the chancel, with dark igneous stone relieving arches. 2-light E window with elaborate curvilinear tracery, and a recessed panel below, having a reset late medieval cusped head. This recess contains the full arms with a shield in pretence, mantling and crest of Love Parry, all in very fine condition, inscribed to Love Parry of Cefn Llanfair, d.Sept 9 1707. On the N side 2 two-light C19 windows. The W end has a high 2-light Y-tracery window. The tower is added on the S side near the W end with the vestry attached on the W. Snecked rubble, 3 undifferentiated stages above a plinth, and a crenellated parapet. Lancet windows with trefoil heads and 2-light belfry openings with timber louvres. Pyramidal slate roof and windvane. The C20 extension has timber doors and applied diamond leading to the windows.

Nave and chancel in a single cell, the roof trusses closer spaced over the chancel. Plastered and whitewashed walls, stone floor, but boarded under the pews. One step to the sanctuary. The chancel is of 3 roof bays; C19 arch-braced collar trusses with knee braces to wall posts on moulded stone corbels. The top triangle is cusped. Exposed rafters and ashlars to the wall plates. The sanctuary is paved with C19 encaustic floor tiles. The nave is of 5 bays, similar trusses, but alternate trusses are without the wall posts. The windows are set low in the walls. A very fine oak screen of the early C16 stands between chancel and nave; 3 bays either side of the central wider opening, all with stiff floriated tracery, the moulded middle rail of the screen is in 2 sections, parted by openwork panels. Fleurons on the rails, some figuring birds, and a poor box inscribed on the lid ARIIAN GOCHION 1774 S. A small gallery at the W end, probably early-mid C19, is carried by 2 octagonal posts, and has an open balustrade and access stair against the rear wall. The church has a bell of 1791, replaced by three in 1895.

Monuments: Chancel E wall, left, (a) Carrara tablet, painted alabaster arms above, putto below on a corbel, to Anne Parry of Wernfa, and Rachel, wife of Love Parry, d.1730; (b) right, verde antico sarcophagus shaped panel, the top leaning forward, enriched with anthemion and wreath, to Margaret Jones Parry. On the N wall (c) A gothic limestone aedicule supported on winged angels, to Henry Powell Slingsby, son of Love Parry of Madryn, d.1849. S Chancel, (d) large tablet of white marble against a black slate, by M W Johnson of London, side pilasters with acanthus and anthemion terminals, draped urn on the cornice, to Martha Alder, d.1839, with adulatory inscription. Nave N wall, a large alabaster rope wreath and dentilled trefoil around a trefoil brass plate to Robert Lloyd Jones Parry of Aberdunant, barrister of Lincoln's Inn, JP and High Sheriff in 1862 and 1863. He died 1870. Black marble circular back plate with lobes and half spheres of alabaster, all by Chapman of Frome.

Included at Grade II* as substantially a medieval church, retaining a medieval screen and glass, and for the interesting range of C19 stained glass and monuments to the Love Parry family.