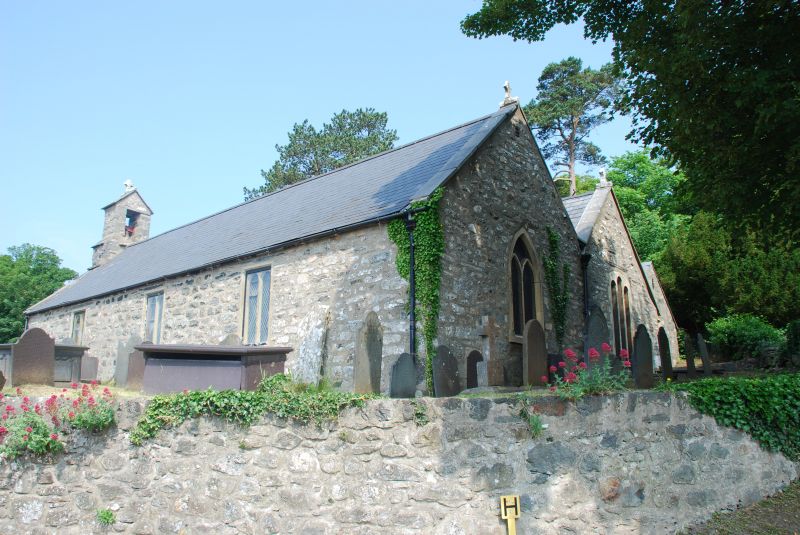 Location: On the NE side of the town, where the lane turns to the E.

The earliest know church on the site was a small structure of late C13 or early C14 date, enlarged to its present form in the late C15 or early C16, repaired in 1851 and more extensively restored c1870-73. It appears that it was originally a double-naved church, though it now takes the form of a nave with integral chancel and N aisle. A hall range was added to the N c1990.

Roughly coursed and squared stone with slate roofs. The earliest masonry is at the W end of the present nave, and is all that remains of the earlier church on the site. Bellcote on W gable of nave, and blind roundel above the doorway which has a steep voussoir arch, and may be the partially rebuilt original doorway of the C13-C14 church. Cross finial and coping to blind W gable of N aisle. Windows all renewed in the restoration of c1870: 3x2-light windows to S, with pointed lights and flat heads. Chancel E window has a similar form, but with arched head. 3 stepped segmentally arched lights to E window of N aisle, which is possibly a renewed (and relocated) window from the earliest building.

Nave has N arcade of 5 bays, an insertion of 1870 to replace what was said to have been a cruder arcade of c1500: slender octagonal columns with ring moulded capitals and double chamfered shallow arches. Stone corbels carry the curved principal trusses of the roof which are of early C16 design (but which may have been reconstructed in the restoration): the 3 easternmost trusses are differentiated by cusping to the struts, tie and purlins to form foiled openings. 2 similar but undecorated trusses with cusped wind braces to E of N aisle, and a curved principal truss of earlier type towards the W.

Furnishings: C18 turned communion rails; panelling forming reredos, dated 1679. The pediment over the central section is enriched with fleurons and wheatsheaves, and was probably added during restoration. Stained glass in E window, dated 1873, and in E window of N aisle, dated 1878. C19 pulpit, linen-fold panelling in a C17 style. 3 slate wall tablets, with commemoration dates of 1760-1840, 1787-1823 and 1692-1773.

A late medieval church with earlier origins which has retained a significant proportion of its early fabric. Its C19 restoration is of interest for an ‘archaeological’ approach which sought to restore or enhance the late medieval character of the church.