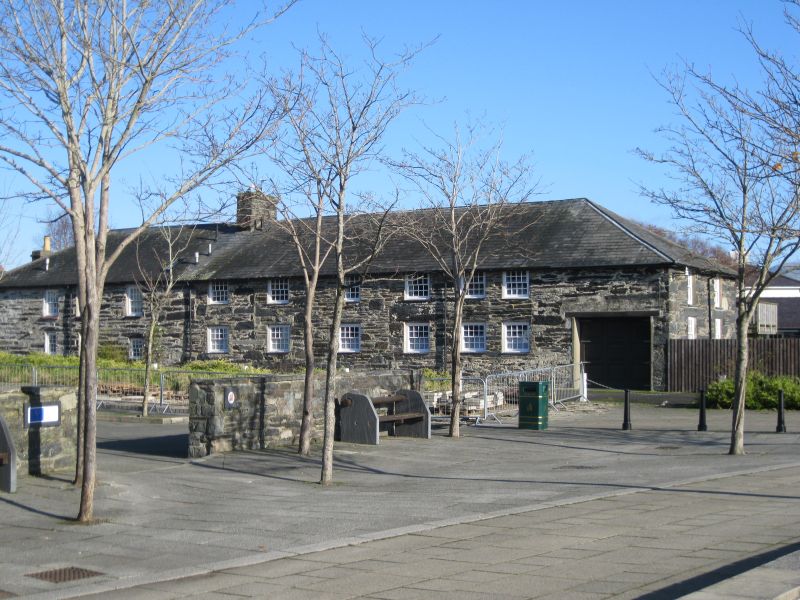 Location: On Oakleys Wharf, set well back from the quayside and beyond the N end of the former slate warehouse.

Porthmadog Harbour was developed from the 3rd decade of the C19, at first by landowner and improver William Madocks (1773-1828). The Act of Parliament for Porthmadog Harbour was passed in 1821 and by 1824 the new port was already ready to receive vessels of up to 70 tons laden. To comply with the provisions of the Act of Parliament, Madocks had a short stone quay built at Cornhill, which henceforth became the commercial centre of the port. Slate companies who purchased wharves were responsible for building their own quays. Oakleys and Greaves Wharf was a single construction for John Greaves (who opened his own quarry in 1846) and the Rhiwbryfdir Slate Company (founded 1838) in the mid C19. The wharf is mentioned by Owen Morris in 1856.

The Oakleys was built in the mid C19 as a house and office for a slate shipping manager on the wharf owned by Matthews & Son of the Rhiwbryfdir Slate Company, what later became known as Oakleys Wharf. It is shown on the 1871 Tremadog estate survey, 1885 harbour survey and 1888 Ordnance Survey. An early photograph of the front shows an asymmetrical composition with entrance on the R side and canted bay windows to the centre and L. The short wing on the L side was an office, with its own entrance. It was later a hotel, when a new N entrance was inserted, and a flat-roofed extension was built across the original front in the latter half of the C20. Disused and awaiting conversion to apartments at the time of inspection in 2005.

A former house and hotel of 2 storeys and 3 bays, with a further bay set back to the L (the original office), of large blocks of coursed local stone painted white, hipped slate roof incorporating bands of fish-scale and diamond slates, 2 rendered stacks to the main house and an end stack to the office. The former E entrance front has an added 1-storey flat-roofed projection, above which are 4-pane sash windows. The flat-roof extension extend across the 1-bay office set back to the L, which has a 2-pane sash window in the upper storey. Its end wall has 2 replacement upper-storey windows.

The N front, latterly used as the entrance, is also 3 bays and has 2-pane sash windows. The R-hand bay has an inserted entrance inside an added shallow flat-roof half-glazed porch with glazed door. The rear (W) is slate hung, with diamond-pattern slates in the upper storey. It has a central replacement window in the lower storey and 2-pane sash window above. Set back to the R the rear of the office is rendered and has an added 1-storey lean-to.

Listed, notwithstanding alteration, as an important harbour-side building making distinctive use of slate and retaining definite C19 character, and for its contribution to the historical integrity of Porthmadog harbour.