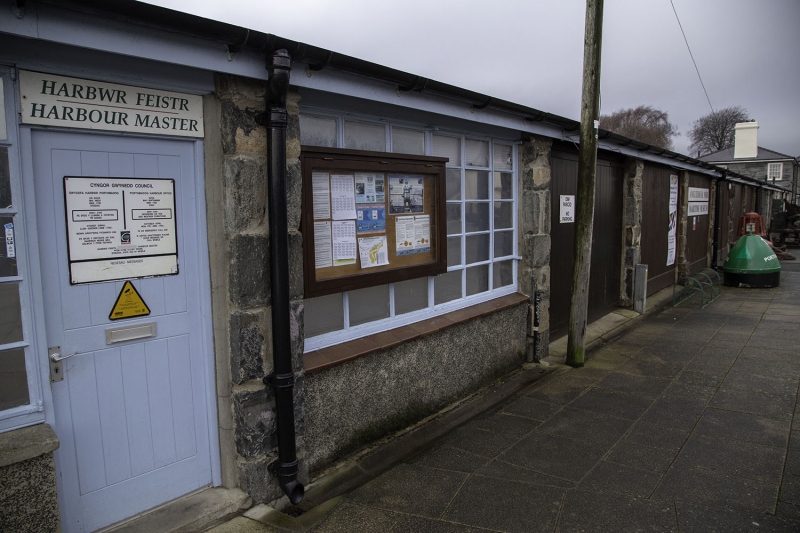 Location: Forming the S end of Oakleys Wharf, at R angles to the quayside.

Porthmadog Harbour was developed from the 3rd decade of the C19, at first by landowner and improver William Madocks (1773-1828). The Act of Parliament for Porthmadog Harbour was passed in 1821 and by 1824 the new port was already ready to receive vessels of up to 70 tons (1ton=1.016 tonnes) laden. To comply with the provisions of the Act of Parliament, Madocks had a short stone quay built at Cornhill, which henceforth became the commercial centre of the port. Slate companies who purchased wharves were responsible for building their own quays. Oakleys and Greaves Wharf was a single construction for John Greaves (who opened his own quarry in 1846) and the Rhiwbryfdir Slate Company (founded 1838) in the mid C19. The wharf is mentioned by Owen Morris in 1856.

The warehouse was built in the mid C19 by Matthews & Son, owners of Rhiwbryfdir Slate Company, on what later became known as Oakleys Wharf. It is the earliest and only surviving shed of a type that was built extensively at Porthmadog harbour in the late C19. It is shown on the 1871 Tremadog estate plan, 1885 harbour survey and 1888 Ordnance Survey.

A single-storey former warehouse of rubble stone and slate roof. The NE side was formerly open-fronted on full-height coursed stone piers, but all of its 10 bays are now infilled. The first bay, now a harbour-master's office, is narrower and has an inserted boarded door and steel-framed window, with pebble-dash below the sill. Bay 2 has a similar window. Bay 3 has boarded double doors, and bays 4-9 boarded infill (incorporating doors in bay 6). Bay 10 is glazed almost to full-height, with rubble stone below the sill, with boarded door to its R. Further R is a full-height joint marking the original end of the building, to which an extension roofed under the same range has been added, with double boarded doors in each of its 2 bays.

Listed for its special interest as the earliest and now the only surviving slate warehouse at Porthmadog, a type commonly built at the end of the C19, and for its contribution to the historical integrity of Parthmadog harbour.