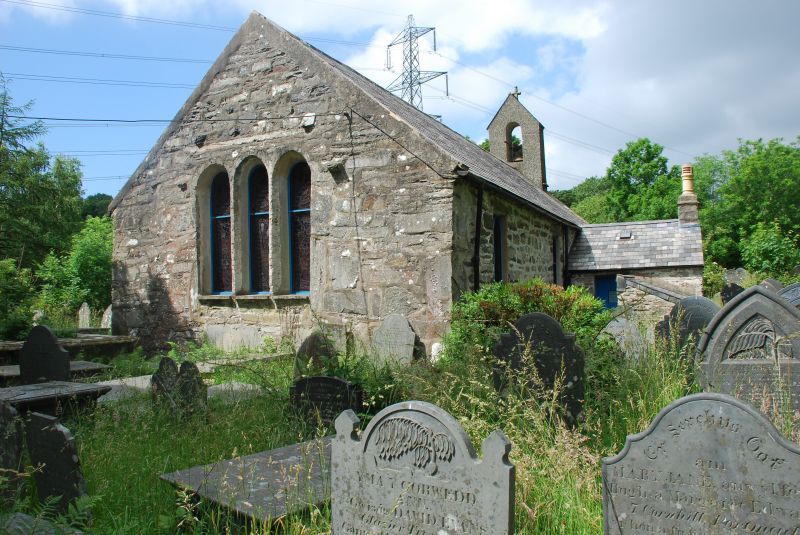 Location: Located on the end of an old road leading SW from the W end of Penmorfa village.

The church is built in rubble stonework, thinly rendered (buttered), pebbledashed at the W end and covered with a C19 slate pitched roof. An aisleless church of 4 bays, continuous through nave and chancel; with a S porch near the W end and a rendered bellcote with crucifix terminal. The porch is gabled, with a round arched entry and split stone voussoirs; boarded door; tiny windows to either side, one depicting St Gybi and the other St Cyngar; chamfered purlins within. On the S side 3 windows E of the porch, square headed with 2-pointed lights formed in timber. The W end has a square headed window in the gable and round headed window below, replacing a former doorway in this position. The N side has gable ended vestry with chimney stack, entered from E beside monopitch roofed outbuilding. Two windows similar to those on the S beyond. E end has reset 3-light window with round arched heads and chamfered jambs; projecting stones at the springing level to either side to the former label moulding. At SE corner, under the eaves, is a sundial, retaining its gnomon and dated 1816 - in memory of Jeff. Holland, rector, and inscribed with an englyn.

The building contains much fabric of the C15 including the roof structure, and restored in 1851-3 and later. Walls plastered above a boarded dado. Roof constructed with five/six C15 knee-braced trusses, strengthened in the C19 restoration with iron ties, and having a boarded panelled ceiling over the chancel bay, with inscribed wall plate cornice all round internally.

Fittings: Jacobethan style arcaded chancel screen; octagonal panelled pulpit of 1887. Lectern of oak, in the form of a large angel with spreading wings, carved by Mrs Constance Mary Greaves, an aunt of the architect Clough William Ellis; similarly the font cover in the form of a winged eagle.

Glass: N window by Ward and Hughes, 1896, to Marian Owen of Ymlylch, S Chancel window, a strong geometric pattern by Meyer of Munich, to Elinor S Huddart. In the nave 3 further Huddart memorial windows. In the W window under the bellcote, some good early C16 yellow-stain glass depicting the head of a bishop, vestments with the inscription ORATE LLYN QUI:JAIOC:FENESTRA(m) [expanded as : Ianit pro Meredyt a vean ap Robert et Margerta verch Maurice uxor ejus, qui haec fenestra fecerunt]. He was the grandfather of Sir John Wynn and had 5 wives and 26 children, and died in 1525

Monuments: against E wall, left of the altar, (a) a white marble or alabaster draped cartouche by R Wynne (fecit) putti under the drapes, and coloured arms and crest at the top connected by hanging garlands. To Sir Robert Owen of Clenennau, d.1666, deputy sheriff, Sergeant Major General of the royalist troops in N Wales, who was sentenced to death but reprieved. Below, winged putto, and inscription Sr R O 1680. Long inscription in Latin explaining that John Owen, a soldier, had 'undoubted and evident loyalty to his King, the Blessed Martyr Charles I', and for whom 'the power of God turned back the sharp edge of the Executioner's axe' and that 'Charles II had restored both himself and his own'. On the N side of the Altar, (b) white marble tablet on slate, panel between carved pilasters, to Nathaniel Matthew of Wem and Pakenham, d.1867; (c) on the N wall, a similar monument to last, by L PooL, to May Matthew, d.1852; (d) bronze cartouche to Richard Methuen Greaves of Wern, d.1942; on the S wall of the nave, (e) upright marble panel on slate, round crenel over, by Barker of W Brompton, to Elinor Sophia Huddart of Brynker; (f) carrara marble sarcophagus tablet to Joseph Huddart, aged 9; (g) Sir Joseph Huddart of Bath, d.1841, and son Augustus added; (h) tablet in Carrara marble to Ralph Huddart, son, d.1839. Also (i) tablet to William Maurice of Clenenay, d.1622, and (j) Emanuel Annwyl, d.1646. On the nave N wall a monument to Flt. Lieut Tony Knowles. At the rear of the church a large hatchment of 1870 with arms of Jones-Parry of Madryn, Lleyn, set in a lozenge, and their motto 'Nec timet nec tumet'.

Included at II* as the most historically significant church in the community, retaining a good medieval roof and other items of special interest.