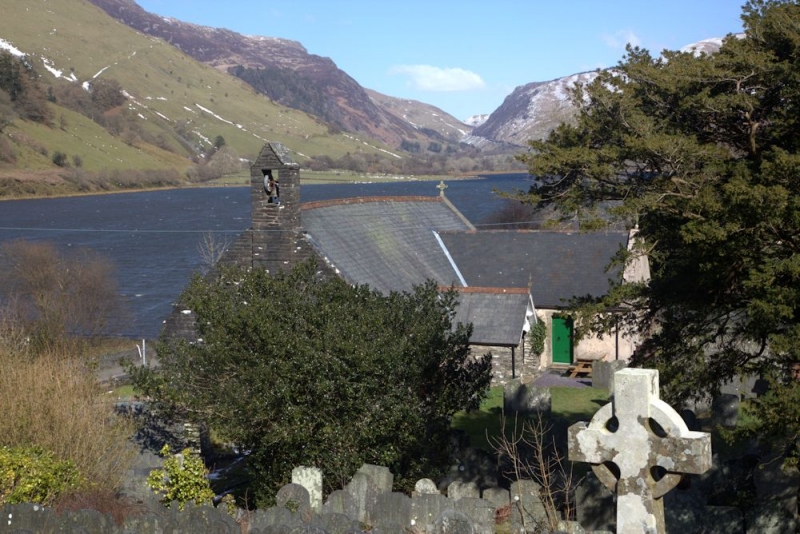 Location: The church stands beside the road from Minffordd to Abergynolwyn, at the S end of Tal-y-llyn lake.

St Mary is the parish church, probably of C12 origin, of which the font is now the only evidence, the fabric probably now largely of the C13, with the transeptual chapel added probably in the late C16, prior to the Reformation. The church was considerably restored in 1876 when the mid C18 gallery was removed.

The chuch is built of coursed rubble with gritstone dressings and a slate roof with red roll ridge tiles between raised gables. Nave and chancel in a single cell, with a wide-spreading S porch and rendered S transept vestry/chapel. Tall gabled bellcote at the SW end with a bell dated 1583. Windows renewed in the C19; one and 2-lights with square heads containing coarse cusping. Three-light C19 E window with quatrefoil head and a hoodmoulding ending at leaf terminals. Outset plinth to the W wall and pilaster to the bellcote. The S porch has a C19 roof with a composite outer collar and struts, open rafters, and narrow side benches of stone flanking the entrance.

The roof is of 7 bays with a ceiled 8th bay at the E end. Two heavy cambered tie beams to the E bays, one rebated for a former screen. The second truss has large curved struts and a collar. The western trusses have arch-braced cambered collars supporting two tiers of purlins, the lower tier supported by wide curved windbraces throughout. No ridge piece. The E bay has a shallow barrel vault divided by moulded battens into square panels, each painted with red and white roses, and grisaille masks at the central intersections, the decoration probably early C16. The walls are plastered. A moulded medieval rood beam against the E wall has been cut away for most of its span. C19 quarry tile floor in the chancel and sanctuary. A late C18 panelled screen divides off the vestry chapel, which is of 3 bays; 2 open collar and tie beam trusses, and cusped windbraces.

Font: a square gritstone bowl with undersplayed corners, reset on a pedestal of 1876. Also a crude square basin of a vesiculated stone, perhaps a medieval stoup.

Monuments: on the S wall, towards the E: (a) white marble scroll against a corniced chest, baton above and painted crests on the plinth, all mounted on black slate, to William Wynn Kirkby, d.1864 in New South Wales. N wall from E: (b) white marble memorial tablet with raised apron and cornice, a draped urn over, by Bovey & Co, Plymouth, to Sarah Kirkby of Maes-y-neuadd, d.1877; (c) Carrara tablet by Davies of Towyn, to Mary Jones, Ty'n-cornel, churchwarden d.1924; (d) brass stepped cross on slate, inscribed to John Jones, Maes-y-pandy, d.1918 on the Hindenberg Line; (e) Slate tablet to Owen Owen, Ty'n-cornel. d.1851 on the barque 'Bathurst'; (f) a slate tablet with gilded lettering to Ann Owen, d.1828; (g) A framed slate tablet on stone, to Humphrey Owen, Dolfaenog, d.1852.

Included as a parish church of largely medieval construction, extended in the C15 or early C16 in a manner very similar to St Michael, Llanfihangel, and having an interesting painted ceiling and other early features; a church where the C19 restoration has not vitiated its character as a medieval village church.