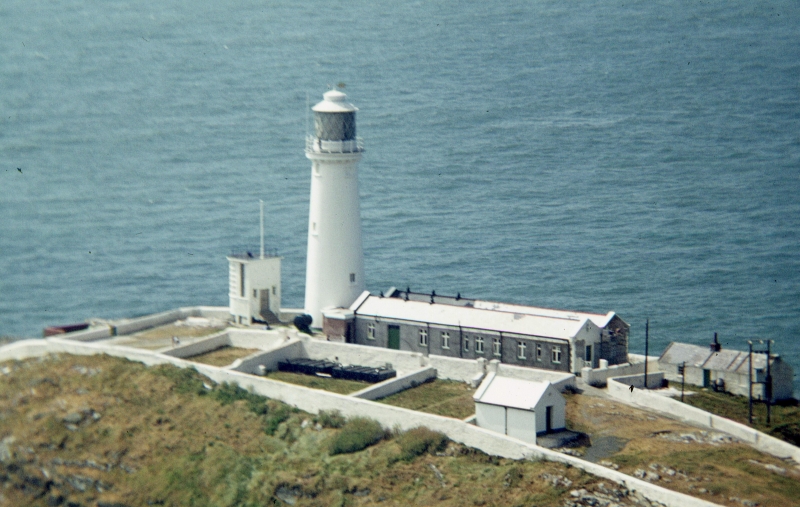 Location: Situated on South Stack Island, due W of Holyhead, and approached via a long flight of steps in the cliff, and a bridge over the narrow strait separating the island from the mainland.

A lighthouse on South Stack was first proposed in 1665, but in fact a light was not established here until 1809. The lighthouse was designed by Daniel Alexander, consultant engineer to Trinity House, and it was the first one that he built. Its builder was Joseph Nelson, who also built associated dwellings (possibly the detached buildings to the E of the present range). The tower was raised in height in 1874, and a new lantern added. It is likely that the present accommodation was added at this time. Oil powered since 1874, the light was electrified in 1938 and automated in 1984.

.
28 metre high tower towards the W of the island. Masonry, (from rock dug out on the site) rendered and painted white, circular and tapering in plan. Bold modillion corbels carry the projecting moulded parapet which supports a cast-iron railing with fluted finials to posts. Cast-iron lantern with lattice glazing and domed roof with cowl. Projecting sills to small stair windows, and service room windows at upper level, which are mullioned and transomed with raked-back upper lights.

Engine room and former keepers' accommodation adjoin the tower to the E: white-washed rubble with 2 parallel slate roofs with coped E gables. Single storeyed, with entrance in projecting porch to the SW, and in E facing gable, in rusticated architrave. 4-light mullioned windows with external shutters.

The tower is open as far as the service room immediately below the lantern, with a cantilevered stone staircase against the outer wall, with plain bellied cast-iron rail. Cast-iron tube runs the full height of the tower, formerly housing the weights of the clockwork rotative mechanism. Optic carried on cast-iron base: cylindrical columns with square capitals and moulded brackets. 6-sided lens with prismatic reflectors rotating in a bath of mercury. Engine room has light wrought-iron trusses either side of a central cast-iron beam carried on cast-iron columns; former keepers' accommodation comprises a series of rooms opening from a central corridor.

A fine example of a tower lighthouse with its associated buildings.